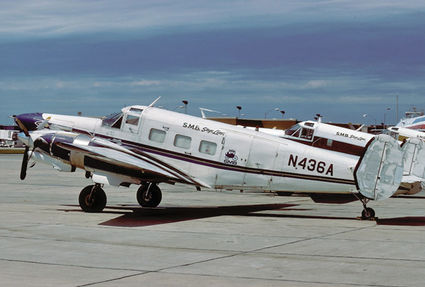 A "Beech 18" that once belonged to the Sedalia, Marshall and Boonville Stage Line.

Back when "overnight delivery" was exotic, an interesting fleet of airplanes flew "time sensitive" stuff like legal papers and canceled checks. One such aircraft was the Beech 18. Originally a business transport or small airliner, it was a tail dragger with two radial engines. The "18" evolved. Some had turboprop motors and other's tricycle gear. A big player in the business with the intriguing name of "Sedalia, Marshall and Booneville Stage Line" once had the world's largest fleet of these now valuable antiques.

When the US Postal service got into the act, minimum equipment was required for their contractors and periodic inspections were made. One less than scrupulous operator was told by the USPS inspector that they were not in compliance as some of their airplanes lacked weather radar and deicing equipment. Knowing the inspectors were not aviation people, the owner asked how they deduced this. The airplane's noses and wing leading edges would be black if they had the equipment was the reply, so the operator dutifully painted them black (or so it was rumored). Fortunately, more honest folks prevailed.

Another pioneer used a fleet of repurposed business jets that flew higher and faster, outrageously calling itself "Federal Express." Being a few years away from military flying all this was interesting, but I was getting established in engineering and had no desire to fly freight. To keep my aviator gene happy, I flew a slick little Mooney for business trips. A current flight instructor certificate allowed me to teach lessons when the other aspects of my life failed to offer enough aggravation.

A good friend named Bruce owned a fight school that provided me with teaching opportunities. Bruce had been a Navy aircraft mechanic, then taught school while he worked his way through the FAA certifications to be a CFI and II. He attracted some very desirable clients, especially from the medical profession. Doctors make good flight students because they're smart and have lots of money. One doctor/student made a fortune by inventing a diagnostic technique and selling kits for doing it.

These diagnostic kits used radioactive stuff, really time sensitive, the useful life being about a week. Soon they were being marketed in Europe. They got there twice a week by way of Minneapolis/St. Paul and Chicago /O'Hare airports. From the production facility, they were driven to MSP and put on a plane for Chicago then transferred to an international flight. Getting from the production facility to the international flight took over 24 hours which decreased the value of each shipment by about $30,000. The good news was a shipment worth half a million could fit in a Buick.

Bruce had the solution. The doctor would buy the single engine, high-performance airplane that he coveted anyway (and would be a tax deduction). Bruce would fly it to O'Hare with the goods. Since the kits would be ready at 3:00 p.m. and the European flight left at 8:00 p.m., a whole day would be saved. One afternoon I was contemplating pavements when Bruce called. "Take the trip to Chicago today please" he said in an urgent voice. So, I reluctantly pretended to be a freight dog.

On earlier trips Bruce had found it VFR in Chicago. Air traffic control had accommodated him with visual approaches to runways not in general use with "hold short" provisions. In and out with minimum pain. This day it was different. Not awful weather, but IFR. I had to queue up with the heavy iron. Thirty plus minutes of vectoring took me an uncomfortable distance over Lake Michigan. The final approach clearance included "maintain 140 knots," (which was almost cruise speed). I did it, broke out about 600 feet, configured the airplane, landed on the touch-down point and made the first turn off.

The ground controller issued a clearance in gibberish, then sighed and said, "I'll give you progressive taxi instructions." Another 30 minutes and I was at the drop-off. The last transmission from the controller was a phone number with a request to call ATC and ask for "John." A big knot developed in my stomach. That kind of request usually meant you've messed up. 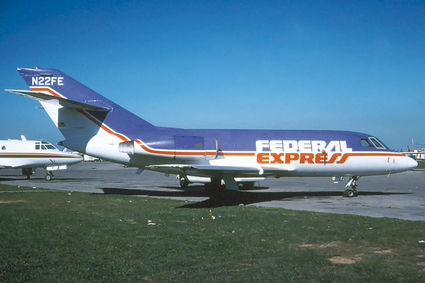 A "Dasault Falcon 20" that was one of the first fourteen airplanes operated by what is now "FedEx".

I expected chewing out or worse and John said, "I know what you're up to." The knot got bigger. What did he think I was doing? Besides his FAA job, John did flight instructing at the Palwaukee Airport and thought I might be delivering "priority" stuff. He offered that we could land at Palwaukee. If we bought gas, the FBO he worked for would loan us a car for a 10-minute drive to O'Hare. Cool! That would save 30 minutes of flying and the guided tour of the big airport's taxiway system. Bruce confirmed the arrangement with the FBO who also mentioned his son was at college in the Twin Cities and might like an occasional ride home.

Once my blood pressure got back in the green, I flew home. After that, the radioactive stuff flew to Palwaukee, then went by car to O'Hare. I went to Chicago for Bruce a few more times and could now stop for a burger before the trip home. The European market for the diagnostic kits got bigger, and an arrangement was found to fly the stuff directly from Minneapolis. That was just as well. Winter was coming with the attendant icing conditions. The temporary gig as a make-believe freight pilot was over, but it turned into a fun interlude.

......This story is true, or at least something like it did happen. In any case, this how I remember it, and that's what's important. Names have been changed to protect the innocent, except mine. I'm probably guilty of something.