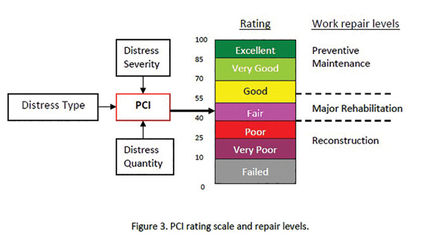 Start talking pavement technology and almost everyone else's eyes glaze over. Pavements are fascinating. Discussions about fine and coarse aggregates can go on for hours and of course a great topic is the never-ending debate over which is more cost effective, asphalt cement concrete or Portland cement concrete. Ok, for airport engineers that's interesting. But in the 21st century good pavement is necessary for a good airport. Economics dictate that most general aviation airports in Minnesota have asphalt pavements, or black top.

Princeton could be the prototype general aviation airport. The paved and lighted runway is 3,900 feet long with a full parallel taxiway. A generous apron provides transient parking. The building area has both private and public hangars and is home to 36 aircraft. The airport was constructed in 1986 and the asphalt pavement has lasted about 50% longer than most, a tribute to quality maintenance. It was time for new pavement and that was recently accomplished with an innovative process called reclamation.

Using a minimal amount of engineer speak, reclamation involves grinding up the old pavement and incorporating the materials into the new stuff. At Princeton just over two inches of new aggregate was spread over the existing pavement. Then a big machine chewed up the new gravel, old pavement and about two inches of the existing aggregate base to make a new base course. New asphalt pavement was then constructed and presto, rehabilitated pavement.

Reclamation is cost effective because existing materials are used reducing the need to mine and transport aggregates. Disposing of old asphalt is eliminated which is good for the environment. The Minnesota Department of Transportation and their Office of Aeronautics successfully pioneered the reclamation process for airports.

How does an airport owner know when the pavement needs work? One way is when the pilots complain about loose gravel dinging their propellers, or enough cracks appear in the pavement to make it look like alligator hide. Aeronautics has a more scientific system called "Pavement Condition Index" or PCI. MnDOT's airport engineers rate pavement based on guidance from the American Society for Testing Materials (ASTM) with a score between 0 and 100. About 20 types of distress are noted during regular inspections. As the pavement ages, the PCI will decrease. Brand new pavement is 100, when the index is down around 60 routine maintenance will not do the job any more. It's time to start planning for a rehabilitation project, which is what they did at Princeton. Let it get down to about 40 and a much more expensive reconstruction will be needed plus the cost of fixing props.

Princeton Airport has some colorful history. About 40 years ago it was a turf strip located just north of the current site. Like many cities in that era, Princeton was struggling financially so they sold the airport to a fellow named Joseph Diego (aka Casey) Ramirez for $90,000. He paved it and later built a taxiway. He spent a lot of money on many other civic improvements around Princeton, but like all fairy tale characters he was too good to be true.

In 1984 Ramirez was found to be deriving his income from the illegal sale of controlled substances. He then moved to Sandstone to be a guest of the federal government for a few years, but he did jump start airport development in Princeton. 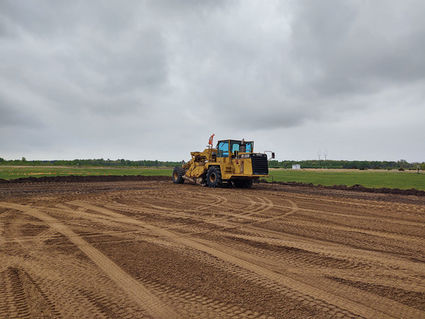 Princeton was established in 1856 and was originally a lumber town. One of the founders got the place named after him, John S. Prince (Prince Town, later Princeton). Today the lumbering is history, but Princeton is still prosperous. A strong local work ethic makes for lots of business opportunities, plus there's some great recreation. The city is on the Rum River, one of the most scenic in Minnesota and a popular stream for kayaking and canoeing. Louis Hennepin called it the St. Francis River, but the local Dakota called it the Spirit or Mystic River. Perhaps on purpose, 18th century fur traders misinterpreted the kind of spirits the natives were talking about and called it the Rum River.

Princeton Airport is conveniently located next to the industrial park and is in walking distance of downtown. There is self-service fuel and a full service FBO. Business or pleasure it's a great place to visit and the nice new pavement will be welcoming guests.