"May you live in interesting times." (Chinese curse)

"We're from the FAA. We're here to help you." (Aviation humor) 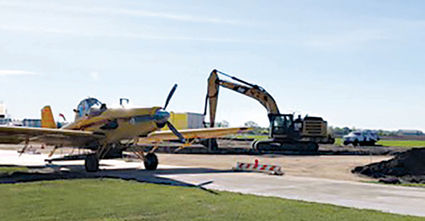 Taxiway currently under construction at the Fergus Falls Airport and funded by the FAA.

It would be hard to imagine more interesting times than what our planet has recently experienced. The coronavirus worldwide pandemic and the resulting government responses have very much changed the lives of everyone. No baseball, movies, airshows or fly-ins. Bars and restaurants are closed, so the $100 hamburger run is out. The economy took a major hit, resulting in widespread unemployment. Aviation activity has decreased on an alarming scale. The U.S. airport system has felt the jolt as much as any other sector, but help is now available.

Civilian flyers like to make fun of the Federal Aviation Administration. It might be good natured, but the fact is general aviation in the United States enjoys the best system of airports and facilities in the world. This system exists in its current form, largely because the FAA is here to help by both regulating and supporting aviation. Financial aid for infrastructure is an example of local facilities being supported by the federal government. In response to the pandemic, more FAA help is now available. Maybe before that though, a short review how the FAA came to this role would be appropriate.

In 1970 the "Airports and Airways Development Act" or AADA became law. It was accompanied by the "Airports and Airways Revenue Act" or AARA. The first provided for federal funding of public aviation facilities and the second determined how the first would be paid for. A trust fund was created with revenue from taxes on airline tickets and aviation fuel, plus fees from aircraft registration. A 1976 amendment adjusted revenue and spending levels. Currently funds are distributed under the "Airport Improvement Program" (AIP) created by legislation passed in 1982. AIP combined the earlier "Planning Grant Program" (PGP) and "Airport Development Aid Program" (ADAP) into a single, multi-year grant program. The philosophy was (and still is) that the users of aviation would pay for the facilities. For 50 years this has been a successful program enabling federal, state and local government to pay for things ranging from planning studies to runway pavement.

To receive funding from the AIP, an airport must be publicly owned, open for public use and included in the National Plan of Integrated Airport Systems (NPIAS). Heliports and seaplane bases are also eligible. Privately owned airports can be funded if they are designated reliever airports, or if they have commercial service and enplane more than 2500 passengers every year. In general terms, the FAA provides a fixed percentage of the cost of an improvement with the state and/or the airport owner paying the rest. Recently the FAA has been funding 90-95% of the costs.

This is a good funding system, but still a government program with environmental requirements and lots of paperwork. Fortunately for Minnesota airports, the folks who work for the Office of Aeronautics at the state DOT are on top of this. They help local officials with getting through the process. Aeronautics also administers a state funding program for airports and projects not eligible for the FAA grants. It should be noted that state aeronautics funds also come from taxes on users. MnDOT helps with routine maintenance as well as construction projects.

The Coronavirus Aid, Relief and Economic Security Act became law on March 27, 2020. Like many other government programs, the name just happens to translate into a catchy acronym, CARES. Aviators should pay attention to the part of the act that directs the FAA to help even more with additional funding for certain eligible airport projects. Federal funding levels of 100% are available and there will be supplemental money made available to all airports in the federal system.

There have been other interesting times when the government made an extra effort to help airports. Aviation's "Golden Age" included the 1930s, but life was not golden for a lot of people back then.

This was the period of the Great Depression and unemployment was a huge issue. In response the federal government created the Works Progress Administration or WPA. Intended to provide jobs through public works, a significant number of airport projects were undertaken by the WPA. Many were successful, but the WPA was intended to generate meaningful work. Building aviation facilities was merely a sideline.

Following World War II, big changes in aviation were expected. In 1946 the Federal Airport Act became law with funding provided for "civil aviation airports within the continental United States." Another provision of the act called for creation of a "National Airport Plan." Money for these undertakings was to be provided by the general fund. There was no dedicated source of revenue, making long term project planning difficult.

Now aviation has a federal program with revenue dedicated from fees and taxes on users. It's administered by an agency whose purpose is promoting aviation and employs people with a strong connection to the industry. During interesting times or just ordinary ones, the FAA is here to help airports and aviation.

For more information about funding for airports under CARES, visit the FAA website: http://www.faa.gov/airports/cares_act/.

Besides the CARES details, the FAA site has an interactive map that will tell you about how your local airport will benefit. The site also has links to general information about airport funding programs administered by the FAA and a link to the NPIAS. Yet another link leads to an interactive map showing current FAA grant recipients.