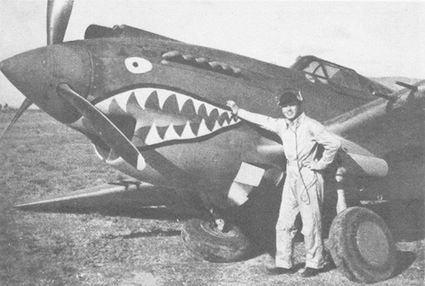 In all the history of aviation, only 99 pilots can claim to have been "Flying Tigers." The nickname was later adopted by the 23rd Fighter Group of the U.S. Army Air Force, but the original Flying Tigers were not members of the military. They were a band of mercenaries recruited by Claire Chenault before the U.S. was officially at war with Japan. Flying in Burma and China from December 1941 to July 1942, they destroyed 296 Japanese aircraft, losing 14 pilots in the process. Einar Mickelson from Fergus Falls, MN was one of the 99. He was also handsome and charming, a poster boy fighter pilot.

Mercenary American aviators have a long and honorable tradition. In World War I, the first U.S. pilots to fight the Germans belonged to the famous Lafayette Escadrille. They were much revered, though technically soldiers of the French Foreign Legion. During the war in South East Asia, a private company (although partly owned by the CIA) called "Air American" flew regular combat missions in Laos. Even before the U.S. involvement in that war, a company called Civil Air Transport (or CAT, another Chenault creation) fought with the French Army in Indochina. All of the Flying Tiger pilots were former members of the U.S. Army, Navy or Marines. With 200 ground crew, they formed the First American Volunteer Group (AVG) of the Chinese Air Force. In fact, they were employees of the Central Aircraft Manufacturing Company (CAMCO) and paid roughly three times that of U.S. military personnel. Pilots could also receive a bonus of $500 dollars for destroying a Japanese aircraft (about $9,000 in the 21st Century). The pay was high and so was the risk.

Claire Chenault was an excellent flyer, but he lacked the patience to succeed in the peacetime military. He was pretty much forced to retire from the Army, but wartime is different. In 1937, China was fighting to defend itself from Japan and Chenault became the military aviation advisor to its leader, Generalissimo Chiang Kai-shek. In 1940, Chenault returned to the U.S. to purchase fighter planes for China. At the time, the most advanced U.S. fighter was the Curtis P-40 "Warhawk." Chenault got 100 "Hawks" and permission to recruit pilots and ground crew from the U.S. Military.

Meanwhile Einar Mickelson was getting his degree at the University of North Dakota. After starting college, he took a few "gap years" to work for Montgomery Ward and to establish a reputation in his hometown as a "well dressed, sharp looking fellow" and "quite an attraction for the girls." He took that reputation to Grand Forks and, being older than most undergraduates, was a hit with the coeds. Mickelson got into aviation by training with the Navy and graduated from flight school in May 1941. When he heard about Chenault recruiting flyers, Mickelson left the Navy and joined the AVG.

The first stop was Burma, where the planes were assembled and the AVG was assigned to protect the road connecting the port of Rangoon to Kunming, China. Two AVG squadrons were based at Kunming and the other at Mingaladon near Rangoon. They delayed the inevitable, but Burma was soon overrun and the AVG assembled at Kunming. The Japanese invasion of China in 1937 caused people and businesses to flee to the interior. Kunming had become an important city and defending it from Japanese bombing was now the mission of Mickelson and his comrades.

After returning to Kunming from a mission, Einar set out for town with another pilot. They passed a bunch of people, including two attractive women, waiting around while their airplane was being repaired. Einar pulled over and invited the women to join them for "tea." The women accepted and climbed in the flyers' car. One of men said he would like to come too, but that wasn't part of the plan and the Americans quickly departed with the women.

Meiling Soong was one of the women and she spoke excellent English with a Southern accent. Einar asked her for a date but was turned down. Ms. Soong was a graduate of Wesleyan College in Georgia and happened to be married to Chiang Kai-shek, the most powerful man in China. He was the guy Mickelson had left standing in the dust. She was generally called "Madam Chiang" and was really co-ruler making her the most powerful woman in China. His country needed the American flyers so Einar and his accomplice were forgiven by Chiang, but ribbed unmercifully by their buddies.

After the AVG disbanded, Mickelson went to work for China National Aviation Corporation (CNAC). The loss of the Burma Road had made getting supplies to China an airlift operation. CNAC's principal route was over the Himalayas from Assam, India to Yunnan, China; the notorious "Hump." Not combat, but it was dangerous flying just the same. More than 1300 allied aircrew would die flying the Hump. 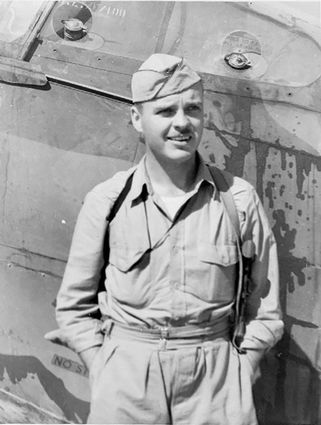 Exotic women were around in wartime India too, including some Russian nobility. One of them was Natalia Beloff. Ms. Beloff was born in Vladivostok. Her family fled to China after the Russian Revolution, then to India when the Japanese invaded. In 1943, Natalia was working for CNAC and attracted the attention of the handsome airline Captain from Minnesota. They were married on September 20 in Bombay (now Mumbai), but their marriage was tragically short. Mickelson's plane went missing on Feb. 20, 1944. The wreck was later found, but his body was never recovered.

On September 19, 1948, Mickelson's hometown named its municipal airport in his honor. In his career with the AVG and CNAC he flew from some primitive facilities, but Einar Mickelson Field is none of that. It's a modern, well maintained airport that appropriately preserves the memory of an American Hero. Einar's charm also had a degree of immortality. Natalia had remarried but traveled to Fergus Falls from her home in Maine for the dedication.