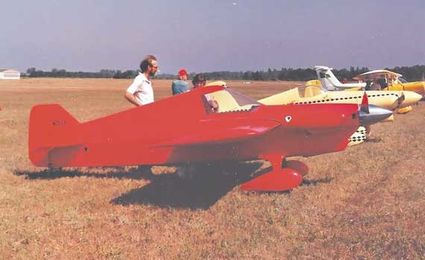 What we call the Formula I Class at Reno, evolved from the Goodyear Trophy Racers that developed in 1947 around a 190 cubic inch engine, the 85 hp Continental C-85. Rules stated that the aircraft must have a minimum of 66 square feet of wing area and have an empty weight of at least 500 pounds. Props had to be fixed pitch and gear non-retractable. Goodyear sponsored the races for three years. Although the Cleveland races ended with 1949, the midget class continued. Famous racers included Steve Wittman's Buster, Art Chester's Swee Pea, the Cosmic Wind, and Bill Falck's Rivets.

Begun in 1951, Tom Cassutt's little racer (N20N) first appeared in the 1954 Dansville, New York race, finishing at over 166 mph. By 1958, Cassutt had upped its speed to 195 mph and won the national championship. Soon after, he began selling plans for the Cassutt for just $20.

In 1960, Cassutt sold his Race #11 (N1111U) to Captain Jan Christie (1917-2015), an old friend of mine. Jan learned to fly in 1935 in a Gypsy Moth, flew with the Royal Norwegian Air Force against the Germans, then escaped to England and flew Hurricanes, Spitfires, and Mosquitos with the RAF. Post-war he flew for SAS until 1976. I first met Jan at Oshkosh in 1990 and continued a connection with him for many years. He was a great and modest gentleman. Jan raced the Cassutt II at Ft. Wayne in 1960, qualifying at 194 mph. He won Heat #1 at Ft. Wayne, the first European to win an American race since Michel Detroyat won the Greve Trophy flying the Caudron C.460 in Los Angeles in 1936.

There were many correct responses, with Rockwell Commander pilot Rolf Ringgold winning this month's honors. Thanks to all. Stay safe, stay well. Blue skies and tail winds.