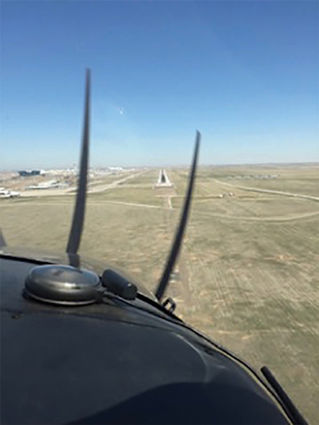 Recent changes in travel brought about by COVID-19 had put a damper on my planned aviation adventures. A trip to Hawaii in my attempt to land a Cessna in all 50 states canceled. A friend and I were going to fly to Wyoming with a stop in Idaho so I could complete my 50th state was also canceled.

An opportunity to fly a rescued dog to Greeley, Colorado in my C182 became a fun chance to aviate under COVID restrictions. As I contemplated the trip, I had a crazy idea. Why not land at KDEN? (Denver International Airport) Then I needed to figure out how to safely accomplish my first landing at a Bravo airport.

I pulled up the KDEN taxi diagram. What a spiderweb! I listened to Denver Approach and Tower on liveATC.net, followed along on my diagram and drew the clearances. I called Denver Approach for advice. They said we should file IFR, expect radar vectors and would not be given a SID (Standard Instrument Departure). I've always been given a SID on previous trips to Denver airports, so briefed the PLAINS1.AKO transition. A full stop would be required to collect mandatory landing fees.

My friend flew into Greeley, where we were warmly welcomed. After dinner I checked NOTAMs. There were many closed taxiways. I wondered why, and soon found out!

It was a beautiful VFR morning, and we were excited! Familiarity with the Denver area helped my situational awareness as I recognized landmarks. We were given vectors to 35R, and then offered 35L which we accepted as it would be a shorter taxi. 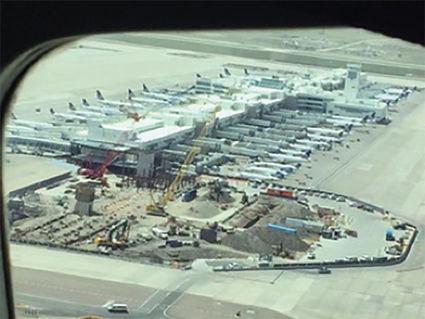 Terminal with a plane parked at every gate.

The approach was an unforgettable experience. That runway was huge! At 12000'x150' it was definitely the largest I have landed on. Taxiing was uneventful, other than taxiways also seemed huge. Lots of concrete at KDEN!

We were treated like royalty at Signature. As we left the plane, a Southwest jet landed on the runway we just exited. I couldn't wipe the grin off of my face! We paid the $40 landing fee, and had our Signature fee waived by purchasing fuel.

My friend was PIC next. I called for our clearance and was given the expected SID. As we launched, I realized why all the taxiways were closed. The taxiways and one runway were filled with parked planes!

It was a fantastic trip, and a great learning experience. The time spent on preflight planning was well spent, making the trip safe and enjoyable!