My blood pressure was about to spike. The youngest daughter had just told me she was going to the Marine Corps Ball. This was a successful and self-assured young woman, who could take care of herself very nicely. No matter. I was having flashbacks to a much different era, and the only time I'd ever been to a Marine Ball.

November 10, 1775 is the birthday of the United States Marine Corps. Initially called the Continental Marines, their birth place was "Tun Tavern" in Philadelphia. Appropriately the first Marines enlisted in a bar.

Even in the most remote locations, the Marines celebrate the anniversary, and when it's possible they have a formal ball. Marines claim to have fought in every place and clime where they could take a gun. Certainly, Adak Island is the most isolated and forbidding place they've ever served in.

About midway along the Aleutian chain, Adak became a U.S. Navy base during World War II. There was also an airfield there. Bomber sorties were launched from Adak against Japanese fortresses of Attu and Kiska.

By the time I visited, it was the "cold war" they were fighting on Adak. The base was used by Navy P-3s to track Russian submarines in the North Pacific and Bering Sea. Like many other naval installations and the streets in heaven's scenes, Adak was guarded by United States Marines.

There was no indigenous population on Adak. The natives had moved westward late in the 19th century. Surprisingly, military personnel stationed at Adak could bring their families. The base had a school, church, commissary, and theater. Peak population was about 6000 military and civilians, but only about 10 percent were females. It was a place not very conducive to having a formal ball, but in 1970 the Marine contingent on Adak was throwing one for their birthday party.

They needed a band and had to borrow one from Elmendorf AFB in Anchorage. I had just arrived there, was newly qualified in C-130s, and assigned to co-pilot on the flight that took the band to Adak. All the female military personnel stationed at Elmendorf and nearby Fort Richardson had received invitations to the ball. The ones who accepted would fly with the band. Late that morning we left for Adak with some of the ingredients for the party. The Marines were providing food, the traditional cake, and liquid refreshments.

Weather in the Aleutians can be very interesting. The warm water of the Pacific meets the cold of the Bearing Sea creating the strange phenomenon of high winds and fog. At Adak the ceiling and visibility were just above minimums that November 10.

Latest technology at the time included auto pilots that could fly "coupled" approaches.

Today's equipment can fly the airplane from A to B including takeoff and landing without input from the pilot. The Elmendorf Hercules were some of the oldest around and had none of that. On a good day the autopilot could maintain heading and altitude, but that was about it. The standard for low visibility landings was for the co-pilot to fly the procedure while the pilot looked for the runway. Two other people whose jobs have been eliminated by automation were the flight engineer and navigator. As the airplane neared the decision point the navigator would monitor altitude and position. The engineer watched the power and airspeed. The pilot concentrated on looking for visual clues and the co-pilot on flying the approach.

Ground Controlled Approach or GCA was used at most military bases in those days. The radar controller could see the aircraft's height and alignment, giving the pilot instructions to adjust heading for course or descent rate for glide path. Adak's GCA people were some of the best in the business. The P-3s flew every day in the Aleutian soup and depended on the Navy controllers to get them home.

I'd graduated from flight training six months earlier and rated myself the best pilot in Alaska since Bob Reeve. Naturally I wired the approach, even though it was the first time I'd flown a GCA with the weather at minimums. About 300 feet above the runway the other pilot took over and landed. We were at Adak, and the party was waiting.

At first the ball was all pomp and circumstance. The colors were presented, the national anthem played, and the Marine Hymn sung. After dinner the cake was cut in another ceremony. Believe it or not, how to cut the birthday cake is a chapter in the Marine drill manual. Then the party really got started. 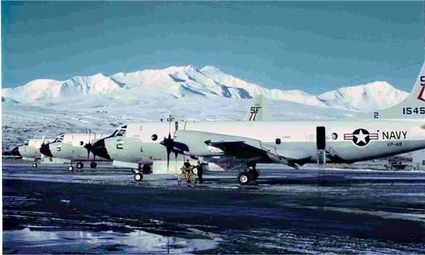 All the Marines were males. Even with the guests we brought with, there were way more men than women. There was, however, plenty of alcohol and testosterone. That dangerous mixture resulted in few arguments about who got the next dance. Occasional offers were made to "step outside", but a couple tough sergeants with lots of hash stripes kept a semblance of order. As the night progressed the alcohol fog inside got almost as thick as the real fog outside. The next morning, we loaded up the passengers including some hung over Marines that were going on leave. Our flight to Elmendorf went off well, except a couple of the Marines were really hurting and made the loadmaster mad by missing the "sick sack." I got home in good order and thought it was a great time.

So that's why 40 years later my daughter's invitation to the Marine Ball put her old dad in a panic.

My apologies to the female gender of the human species and the United States Marines, both of which I hold in the highest esteem.