Isle Airport future to be decided in April 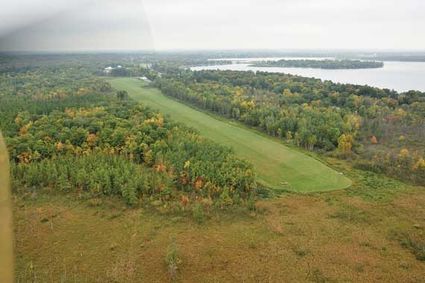 Isle Airport Flying Club member Dave Retka terms it a "fight for survival" of the Isle Airport in a letter to airport supporters in early January.

After growing membership of the club and making a positive difference in this small community of 751, located on the southeast edge of Mille Lacs Lake, the airport's survival is now in question.

Just last July, 45 airplanes landed on its perfectly manicured grass runway, including one from the middle of South Dakota, Aberdeen. During the pancake breakfast, 651 people were served, in other words, pretty much the whole town came out to support the airport and have a great breakfast.

Retka points out what the flying club has accomplished in the past few years which includes:

But at a recent meeting between the city of Isle, the Minnesota Department of Transportation Office of Aeronautics, and the Isle Airport Association, the issue of tall trees on private property to the south of the airport was discussed, explained Retka.

The tall trees, Retka said, are the very last obstacle for this airport to become a public use airport, and the Office of Aeronautics' offer is dependent on the airport becoming public. As other state airports, the city was also informed that once it becomes a public airport, they would also be eligible for state funding.

While pilots can see this is a "no brainer" for the city, some city leaders were not in favor of the airport despite the community support, the support of the aviation community, and the airport association. At the end of the meeting, Retka further stated that if the city did not enforce the air easement to remove the hazardous trees, they would be forced to immediately close the airport. In other words, even if it were a private airport, the license would be revoked.

Minnesota pilot Bob Heavirland agrees it is a great airport to fly into.

In a letter to the Office of Aeronautics, that he shared with the Minnesota Flyer, Heavirland wrote: "It is a community airport and serves much more than the local pilots. There are not that many nice grass strips and few more beautiful and well maintained. I have seen instructors come up and land and take off again just to show the student a beautiful grass strip."

He also shared a story about flying with his son from Alaska, who on their trip about to land at the airport, asked his father if he was sure it was not a golf course, since it was so beautifully maintained.

Isle Airport Association Secretary Patrick Moenkhaus, in an article written by Traci LeBrun in the Mille Lacs Messenger, agreed the airport is vital to the community, and having a public airport would create more economic development.

"The Mille Lacs area is really served by that airport. We would be willing to continue with business as it's been and pay for everything and pay the city on top of that," said Moenkhaus in the article. "The fact of it going public doesn't mean that there will be any additional burden on the city. We could cover expenses and have offered to do that."

In 2019, Remer, a similar size community to Isle, paid $2,289 to support their airport, after receiving almost $18,000 in state wide funding, the paper reported.

The Isle Airport Association has stated that they would be responsible for airport costs should the airport become public, confirmed by both Dave Retka and Patrick Moenkhaus of the airport association, the Messenger stated.

One of the attendees was Kurt Pennuto, of the Recreational Avation Foundation (RAF), who is also a member of the Isle Flying Club.

"RAF wants to promote pilots to use their planes to get out and recreate," said Pennuto. "If we start to lose our airstrips, if our airstrips close, that limits the amount of space and locations pilots can get to."

"I feel there is a separation of education, not only from pilots to the community, but also the community to pilots," said Pennuto. "When pilots land here, they will spend their money in town. They are using this airstrip to get someplace to recreate, just like I would trailer a boat someplace to recreate. I just happen to be using my airplane. I'll land here. I'll go into town. The Flying Club has some bikes available in the Pilot Shack I can ride into town, spend my money locally, or I can use a courtesy car to drive into town, stay overnight in a hotel, then be on my way.... It's a beautiful place to land. It's a beautiful place to visit. I could even fly from the Cities, land here and go fishing, rent a charter boat, or have a boat up here."

How can Minnesota pilots help?

Retka suggests writing a letter to the City of Isle to give their input on how important this airport is to the state in general. He suggests sharing on how this creates economic development in Isle, i.e. for business or spending other money in town. He also suggests you share personal experiences of flying into the airport with the tall trees at the end of the runway.

Secondly, you can also share your input on a survey online at https://www.surveymonkey.com/r/NJQSPR5

Dave retch's 1939 Taylorcraft comes in for a landing on the grass strip at the Isle Airport.

The survey will close on March 15, 2020. The survey is only three questions and there is an area for comments so it will take minutes for pilots to share their opinions with the City of Isle.

In April, the city council in Isle are expected to vote on the future of the airport. Retka said the airport commission is on the agenda to make a presentation to the council, and also the Office of Aeronautics has agreed to come in again to lend their assistance in explaining their offer for local support.

Said Retka: "Isle Airport is in a fight for survival. I believe in the value of this airport, especially in light of the decline in tourism and businesses surrounding Isle due to fishing restrictions on Mille Lacs. Let's band together and prevent the closure of this unique airport on the shore of Mille Lacs Lake. Please take time to complete the form letter and survey. I sincerely thank you for your efforts and support!"