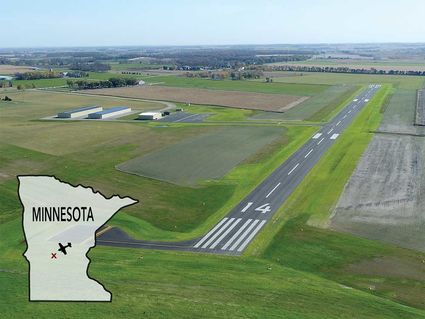 Photo courtesy of the City of Sauk Centre

Aerial view of the runways at Sauk Centre Municipal Airport.

Before Sinclair Lewis made it to the big time, he was an aviation writer. His first published book was "Hike and the Aeroplane." He wrote it in 1912 under the pseudonym of Tom Graham. Literary terminology of the day would call it a "pot boiler." It's about 16-year-old Gerald (Hike) Griffin who helps an inventor land a contract with the US Army for his amazing tetrahedral flying machine. "Fate is the Hunter" it's not. Only 1000 copies were printed, but if you come across one it could be worth $20,000. Lewis' hometown is Sauk Centre, Minn. Appropriately the city owns an airport.

Sauk Centre Municipal Airport is a perfect example of the symbiotic relationship between access to the aviation system and a healthy local economy. Two busy agricultural operators call the airport home, one of which also operates the FBO. A local manufacturing conglomerate bases three planes at the airport and is on record of having increased local employment by 50 percent using their aircraft. Facilities include the main runway that's 3300 feet long, paved, lighted and equipped with Runway End Identifier Lights (REILs). A second runway is 2400 feet of turf. There's lots of aircraft parking, and the Arrival Departure building is open 24/7. Fuel is self-service and a courtesy car is available. A miraculous thing called LPV provides precision approaches to the main runway, and an automated weather system tells pilots when those are needed.

In 1947 Lewis took up the cause of civil rights for African Americans. That year he published "Kingsblood Royal," a novel set in the fictional city of Grand Republic, Minnesota that addressed racial discrimination. It's one of his lesser known books, but in some circles considered the most important. The bad news was it resulted in an attempt by white supremacists to have Lewis arrested by the FBI.

The good news that year was Sauk Centre opened its airport. Lewis didn't attend the dedication on August 31, but Congressman Harold Knutson gave the address. Knutson was himself a well-known journalist and writer. There was much flying activity and airplane rides were offered to the public. The airport celebration continues in July with the annual fly-in. At first the airport had two turf runways and one hangar. The main runway was paved in 1975. A major building project in 1986 include the A/D building and FBO hangar. "Tee" hangars were added in 2000 and 2009.

Sauk is the name of an Ojibwe tribe that inhabited the area. Centre is a reference to the many trading routes that converge there. In the 1940s the city lobbied successfully to retain the British spelling of "center." Lewis was well ahead of his time, and so is his hometown. It was founded in 1855 by Alex Moore who built the first dam on the Sauk River, one of the first in Minnesota. Moore also built one of the first flour mills, although both the dam and mill were destroyed floods. He was a persistent man and rebuilt both. The town soon became a prosperous place.

Prosperity in Sauk Centre continues today. You could well be flying there for business but take some time out and tour around. If pleasure flying is your thing, then add a visit to your bucket list. There are plenty of good places to eat and sleep in town including the Palmer House where Lewis once worked as a night clerk. Just to make it even better, it's haunted.

Fortunately for the more general literary world, Sinclair Lewis gave up on aviation writing. He's best known for "Main Street." In the first six months after it was published "Main Street" outsold "Hike and the Aeroplane" 180 to 1. He wrote a lot more material that is both entertaining and thought provoking. In 1930 Sinclair Lewis was awarded the Nobel Prize for Literature. A lot of things to do in his hometown are about him or named after him.

If you're not interested in great literature, there's trails and three golf courses. Sauk Centre has an excellent system of parks. If you claim "dog is my copilot" one of the parks is just for you. Special events are "Sinclair Lewis Days" and the Stearns County Fair.

Sinclair Lewis might have given it up, but Sauk Centre has embraced aviation and operates one of the great General Aviation facilities in Minnesota.