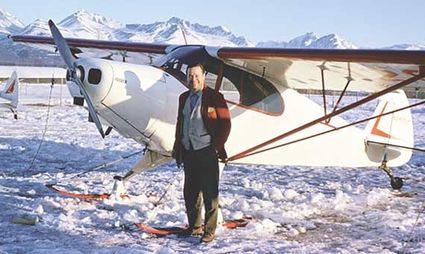 In 1965 Gus DeWeedt was flying over Anchorage, Alaska when he was caught in a sudden storm. He lost control of his plane and crashed, killing him.

One year later his granddaughter, Joelle Petersen, was born in New Brighton, Minnesota.

Peterson never knew her grandfather beyond the picture on the wall. All she knew was that he met his death flying into an Alaskan mountain.

Petersen grew up and eventually left Minnesota. She spent a significant portion of her adult life living in Europe, working in the business world. While in Europe, she travelled the world and oversaw business operations across the world.

The life in a suit and tie began to wear on her though. "Honestly, I was really burnt out. I didn't want to do that anymore," she said. So she packed her bags and moved to Florida.

While living in Fort Myers, Florida, she worked as a sailing instructor. Sailing has been a long time favorite pastime of Petersen's, but when she became an instructor it began to feel more like a job than a hobby.

She enjoyed Florida and all the natural amenities it offered, but she struggled to find her place. She wanted to be around people who were a bit more "intellectually curious."

There was a nearby flight school and she enrolled in the appropriate courses and as Peterson puts it, "the rest is kind of history." But by December, she was growing frustrated with all the legal hoops she had to jump through to get her pilot's license. She still had yet to solo, and she wouldn't be fully licensed for months.

Her mother, Marilyn, knew she was growing frustrated, so for Christmas that year, she gave Peterson one of the family's most treasured heirlooms: DeWeedt's flight log book.

Marilyn had been just 19 years old when her father passed. She was living in Minneapolis and studying to become a secretary when she received word of her father's death. Two days letter she received a letter that read:

Mama and I love it here in Alaska.

Petersen became enamored reading through her grandfather's old flight logs. It gave her a "fire in my belly and a little shot in the arm."

She spent her free time on Google Earth, pinning each location documented in her grandfather's flight log, which were largely centered around the Kenai Peninsula, near Anchorage.

While reading the log book she developed a complicated relationship with a man she'd never known. The flight log book contextualized him as a person. He was no longer this vague ancestral figure who met his untimely death in the remote Alaskan wilderness.

Certain journal entries stood out to Peterson. It wasn't sterile like most flight logs. DeWeedt included details that gave life to his old flights. One entry simply read: "Great fishing. Saw bighorn sheep." As she flipped through the pages, Petersen eventually found her grandfather's final flight log. The entry was dated for Sept. 2 and read: "pleasant flight." Petersen was blown away. "Wow that's cool," Petersen remembers thinking. "You loved what you were doing."

In July 2015, Peterson had finally earned her private pilot certificate. Immediately, she decided to fly to Alaska to experience first-hand her grandfather's life as a bush pilot. She was going to fly to all of the locations marked in the flight log. "I want to know this guy I never knew," she said.

In the summer of 2015, she found Alaska Float Ratings, a float flying school in Moose Pass, Alaska (population 219), located on the northern portion of the Kenai Peninsula.

She contacted the proprietor of Alaska Float Rating and spent the next two summers working at the school, while familiarizing herself with Alaska's vast and endlessly rugged landscape.

Petersen was able to see the exact same sights her grandfather experienced a half-century earlier, a wild and largely untouched wilderness. "The mountains never change," she said.

While in Alaska, she read the journal entries of Mort Clemens, a friend of her grandfather's who worked in the radio control tower in Anchorage.

Clemens was controlling the radio on the night of her grandfather's death. On page six of his log entry, he wrote in red ink every detail of the events surrounding his final flight.

It turns out her grandfather flew into instrument meteorological conditions.

He did a precautionary land, knowing that conditions were not good. He waited, listening to the radio, and for a moment it seemed like there was a break in the storm. This was his window to takeoff. But as he ascended into the air he got lost in the fog and clouds, and lost control in a spin.

He died at the mouth of the Susitna River, in the Cook Inlet outside of Anchorage.

"It's just amazing to read," said Peterson. "This is how he died."

Once she safely descended after her flight to the Susitna river, she immediately called her mother. "Mom, he died on the most beautiful place on this earth," she said. 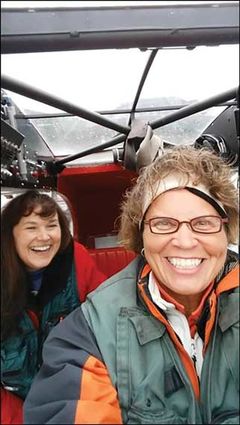 She remembers the sense of closure she felt. She felt like she finally knew her grandfather, someone she'd never known before. "It's just like coming home to something familiar." She describes it as the same feeling one gets when returning home.

She not only got to know her grandfather as a person, but she got to respect him as a pilot.

"My grandpa taught me how to fly, but in just a little different way," she said.

Petersen feels like she learned vicariously her grandfather's hard-earned lessons. Reading the details of his final flight enabled her to have a heightened sensitivity in instrument meteorological conditions. She knows and respects just how abruptly the weather can turn, especially when flying near water and mountains.