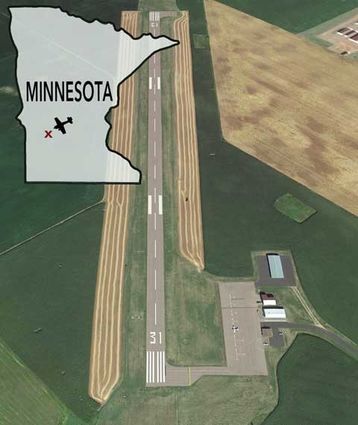 Photos courtesy of City of Springfield

Less than seven years after the Wright Brothers first powered flights the air age came to Springfield, Mn. A pilot who called himself Captain Foster (it's true, you cannot make this stuff up) arrived in town to do demonstration flights in his "homemade" airplane. Foster must have made an impression because by the 1930s Springfield had become one of the first Minnesota Communities to own and operate a municipal airport.

Originally the settlement was named "Burns" after two brothers who were early residents. The railroad arrived in 1873 and the site was platted in 1877.

Plentiful water was supplied by a large flowing spring, and the town is in the heart of the Minnesota prairie. The combination of those circumstances providing the new name when the village was incorporated in 1881.

Springfield was always a progressive community, even at the height of the Great Depression. In 1933 the city received funding from the Works Progress Administration (W.P.A.) for an airport. Eighty acres of land was purchased that year, and the next January 60 workers started building a turf runway at the going labor rate of 50 cents per hour. Total cost ended up being about $8,700.

In 1935 the first Springfield Municipal Airport was opened. Shortly after that a flying club was formed that is still in operation.

Thirty years later improvements to keep the airport current for modern aircraft were needed. The Springfield Action and Renewal Council (SPARC) saw it as an economic development effort and a new site was chosen. Ground was broken on May 5, 1973 and the new airport was completed that year. Construction economics had changed a little since 1933 and the new facility cost about $445, 000. The airport was close enough to the old one for the airplanes to taxi down a road to their new home. A dedication ceremony on July 28, 1974 was attended by Aeronautics Commissioner Larry McCabe and Minnesota Flyer founder Sherm Booen, both Minnesota Aviation Hall of Fame inductees. The festivities included a fly-in breakfast, now an annual tradition.

In the 21st Century, Springfield Municipal Airport has a 3,400-foot-long paved and lighted runway. There are RNAV/GPS approaches to both ends. Pilots are greeted by Runway End Identifier Lights (REILs) and Approach Slope Indicators (PAPI) as they approach minimums. If you remember how it works, there's also a VOR approach. On the ground plenty of aircraft parking space is available, and the Arrival Departure Building is open 24/7. Avgas is self-service. Aeromedical flights and agricultural operators have replaced Foster's home built as the primary users. The flying club is still there, and the usual business and pleasure flying that makes up most of General Aviation keeps things busy.

When the Burns brothers first came to Springfield, they lived in a sod house. There's still one in town that's open to the public.

Fans of "Little House on the Prairie" will remember that Pa often went to Springfield on business, and the road to Springfield from Walnut Grove is part of the Laura Ingalls Wilder Historic Highway.

Photos courtesy of City of Springfield

If you're more of a sports fan, Bernie Bierman was born in Springfield. He coached the Minnesota Golden Gophers football team to five national championships in the '40s and '50s. Professional athletes from Springfield include Major League pitcher Jordan Milbrath (Indians, Pirates and Marlins) and NFL tackle Tyler Marz (Titans and Chargers).

Local attractions include golf courses for both balls and discs, several great parks and trails, and a cool go-kart track.

It's held on the last weekend in June. Dancing, food, drink, a parade and a baseball tournament are all part of the fun.

If you're there on a less auspicious day, you can get your $100 hamburger at several nice local restaurants.

For Pa Ingalls, going to Springfield was an all-day affair, but he didn't have an airplane. Thanks to the Springfield Municipal Airport, the trip is much quicker these days.