Tree of Hope continues to deliver joy in its 30th year 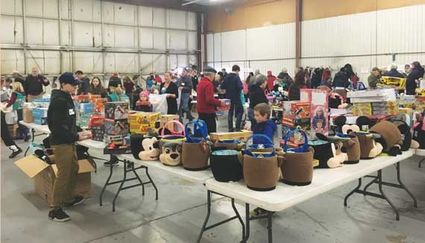 "Volunteers arrived in droves to sort and bag toys at the annual Tree of Hope toy drive in St. Cloud on Saturday, Dec. 7"

Planes flew in from across the state to deliver toys to the 30th annual Tree of Hope toy drive on Dec. 7.

In Hangar 2 of the St. Cloud Regional Airport – the first time the event has ever been held in St. Cloud – hundreds of volunteers scurried frantically to sort, bag and box toys that are to be delivered to hospitals, orphanages and charities across the state for children to open on Christmas morning.

"We keep hoping it will be obsolete, but the hospitals keep asking," said Tree of Hope President Elaine Morrow.

Tree of Hope is a non-profit charity whose sole mission is to provide some degree of joy to children who have to spend their holidays in the hospital or orphanage. Since many hospitals suffer from low staffing over the holidays, according to Morrow, they try to cut costs by sending children to bigger, better equipped hospitals – often in the metro, and far away from home.

This is the first time Tree of Hope has been hosted in St. Cloud. The hangar was made available by Bill Mavencamp, Jr. of St. Cloud Aviation. For the past eight years Tree of Hope was based out of Maple Lake.

Pilots flew in from around the state to both donate and deliver toys. In total 25 planes delivered toys to hospitals, orphanages and charities. This year two planes flew in from North Dakota – marking the first time in Tree of Hope's history planes arrived from two states.

This year, Tree of Hope donated roughly 252 bags of toys, up 14% over last year's donations. They also delivered wrapping paper, bows, bags and boxes for nurses to wrap the toys. In the past hospitals had to provide those things themselves.

The organization was started in 1990 by pilots Ray and Celeste Shefland of Bemidji.

In 1990, Ray was working as an anesthesiologist. He flew to hospitals scattered throughout northern Minnesota to provide his services. Over time, he became disturbed by the number of children resigned to spending their holidays in the hospital.

Ray and Celeste decided something needed to be done. They contacted pilots and aviation organizations from across the state to donate and deliver toys to Minnesota hospitals.

The pilots were invited to the private Nary Airport, located about 10 miles outside of Bemidji, for a walleye fish fry. The airport was isolated and remote, hidden by a dense patchwork of northern woodlands.

Nary airport was opened just a month earlier by Ray and Celeste. Many of the pilots had never flown there before, and many were skeptical of their ability to find the remote landing.

In order to ensure that the newly opened airport didn't become Minnesota's own Bermuda Triangle, Ray and Celeste marked the end of the runway with a with a brightly lit Christmas tree – which now serves as the inspiration for the non-profit's logo.

In its 30th year, the spirit of charity keeps Tree of Hope alive. It is run entirely by volunteers. Pilots, EAA chapters, churches, Boy Scouts and Girl Scouts all turn out to pay it forward on Christmas morning.

The charity is overseen by the Minnesota chapter of The Ninety-Nines – an international organization of women pilots – and the Zuhrah Flyers, also known as Shriners.

Though Tree of Hope's work all comes to a head in December, it is a year round project. Toys and financial donations are collected through Dec. 1 of each year. Every dollar donated to Tree of Hope goes directly towards the children they serve. Financial contributions are often spent frugally, with Tree of Hope utilizing post-holiday sales – for example they were able to purchase this year's wrapping paper at Walgreens for 90% off.

If someone can't donate toys or money, Morrow stresses that battery donations are of equal importance. There are few things more disappointing to a child than opening a new toy, only to find that the batteries aren't included. To circumvent this, Tree of Hope attaches batteries to every toy that requires them.

Tree of Hope has had a lasting impact on those it's served, with many former recipients now volunteering each year.

The Regenold family – consisting of grandfather Jack, father John Sr. and his two sons John Jr. and Phillip – are Tree of Hopes designated "city drivers," delivering toys to all of the children's hospitals in the Twin Cities.

"Everyone here is afraid to drive in the cities," said John Sr., half-jokingly.

The family was so overwhelmed with gratitude that for the past 25 years the three generation Regenold family have volunteered at Tree of Hope.