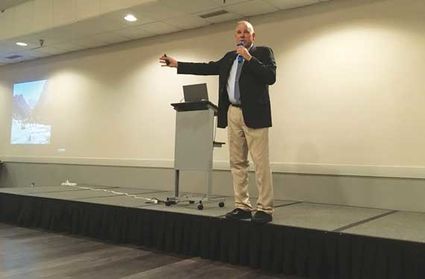 Gary Black presents his story of five pilots who ferried 14 veterans down the Green River on Nov. 17.

Four days rafting down the Green River – a tributary of the Colorado River – in the heart of the rugged Rocky Mountain wilderness. Tim Valentine – an international business person, pastor and humanitarian – knew this untouched North American landscape was a world away from the horrors endured during Iraq, Afghanistan and Kosovo. He hoped it would provide refuge for a group of veterans who've struggled to find anything like it since they returned home.

Valentine ran an outreach program flying people throughout the midwest in need of medical assistance in his SR22 Cirrus. While doing so he became acquainted with Michael Hall, an Iraq War veteran who suffered severe burns while trying to rescue a fellow soldier.

Hall took Valentine on a rafting trip down the Green River to convey to Valentine the therapeutic effect wilderness has on those who suffer from PTSD. Valentine was immediately entranced, and he decided that he would organize a group of veterans and prepare an outing. Valentine recruited four pilots – where he contacted Gary Black, Military and Government Liaison and Regional Sales Director at Cirrus Aircraft – to fly to the isolated nearby town of Vernal, Utah. He planned to spend $25,000 of his own money on the outing. However, two weeks after everything was arranged Valentine died in a plane wreck while flying over Oklahoma. The engine seized, putting the plane into a stall spin and killing everybody onboard.

Valentine's sudden death came as an unwelcome surprise to everybody, and it put the entire trip into jeopardy. However, shortly after the accident, Black received a phone call from Valentine's wife Judy, who told Black that her husband would've wanted the trip to go on.

Black shared this story as the guest speaker at the EAA Chapter 25 banquet in Lakeville on Nov. 17. It was a subject close to home for Black, who served in the U.S. as a Naval Flight Officer from 1976 to 1994.

The trip was back on. Everyone was to rendezvous in Vernal. Pilot Dennis Harbor drove veterans from Salt Lake City; pilot Gregg Guider flew two veterans from Lincoln; and Ken Kirby flew a veteran from Texas. A majority of the veterans did not know each other when they arrived.

The group, many of whom had limited rafting experience, was led by a guide from OARS, a rafting outfitter. They entered through the Gates of Lodore in Dinosaur National Monument in northwestern Colorado. There were eight-man, four-man, and two-man rafts. The rafts were each packed with four days of supplies. Everything they carried in, they had to carry out – including a portable toilet, and all things that went into that toilet.

The river was covered on both sides by 2,000 to 3,000 foot cliffs that seemed to stretch on forever. It was complete wilderness. If anybody broke a leg, or suffered any sort of emergency, they were on their own.

As the party became more familiar, one of the first things they noticed was everybody was heavily tattooed, except for the pilots, for which they were invariably mocked. Black described them as an interesting group of veterans, making note of one particularly formidable veteran of the Marine Corps special operations FORECON. "I would not want to meet this guy in a dark alley at night."

As they rafted down the river and deeper into the wilderness, the group began to open up. Every time they stopped for lunch or dinner, people shuffled onto different rafts and began to further familiarize themselves with the people in the party.

The situation became very real for Black when they hit Disaster Falls, which were named by 19th century explorer John Wesley Powell, who lost two boats navigating the falls. These are classified as Level 3 and 4 rapids – providing narrow passages that required explicit maneuvering.

The party pulled their boats to the riverbanks and tried to map their route. "This is where these vets are good," said Black. Disaster Falls was soon more informally named "Hell's Half Mile." After scouting for a route, one veteran came back and said "pick any one, they're all bad." "Suffice to say, we all got pretty wet," said Black.

Every evening the party would anchor their rafts to a sandbar and fix dinner. Black recalls eating salmon, green beans, rice and strawberry shortcake. "Not exactly roughing it here," said Black. Afterwards they would break out the beer and gin. There was no cell phone reception to distract anyone, and everybody had a story to tell.

For Black, one of the most rewarding parts of the trip was seeing the veterans relax, free from the horrors alive in their memories. He remembers how they would stare endlessly at the sunset, saying nothing.

The outfitter stopped for a three-mile guided hike. Everyone got out of the boat to explore. Before long the three-mile hike was an eight-mile hike.

The whole party was completely immersed with the seemingly endless nature that surrounded them. They were entirely in sync with their surroundings, aware of every sound and movement in their presence. One of the veterans stopped and pointed to some movement over a mile away. He asked Black if he saw it too, "no, I see a rock," Black responded. The veteran pointed out some bighorn sheep on the ridge. "How did you see that?" asked Black. "That's what we do," the veteran responded.

Everyone moved in a uniform and disciplined step. They were spaced out 10-feet from each other. One of the men explained to Black that it is sort of second nature, one bullet could take out two men. At about this time someone asked what everyone was packing – and out came the Colt's, Luger's and Smith & Wesson's. "They're wearing shorts. Where are they pulling all of these weapons out from?" said Black. The pilots were again subject to hazing, they not only didn't have any tattoos, they were also the only ones not packing. 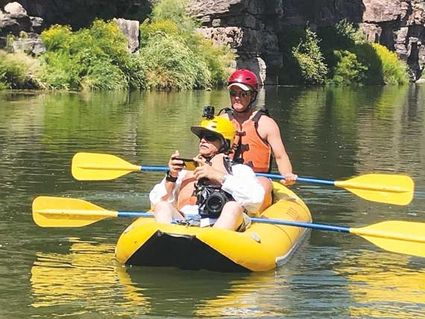 The majority of the trip was done on rafts down the Green River.

On the final day of the trip, the group's spirits were riding high. Black recalls one "adventure swim" when the current was moving upwards of eight knots. The guide explained that if they didn't make it to the rock that they would be pulled into the rapids. The guide had an extra raft at the end of the rapids in case things went south. Black, who has participated in triathlons, was confident as he made his descent. He jumped into the water, which immediately took his breath away and started sweeping him away. One-third of the way and he was already exhausted. He was caught in a dead swim looking down at the rapids, which suddenly didn't look as welcoming. He managed to out-maneuver the current by swimming in an elongated arc.

That night they ate steak for dinner as they celebrated their farewell to the Green River. It was one of those nights where there was no end to the conversation. The western night skies were full of beer filled chatter. The next morning every conversation seemed to be about leaving the city and starting a horse ranch in Montana.

Black has now gone on two wilderness adventures with veterans, and will continue to do so in the future. He is not staunch on the location. "Wilderness is wilderness," he said – even floating the idea of a potential a trip to the Boundary Waters.

He encouraged everyone in the audience to do whatever they could to get more involved with veterans.