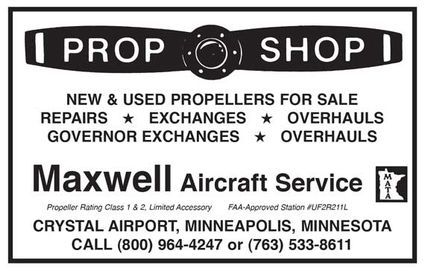 For 73 years, Maxwell Aircraft Service has been the premiere aircraft service shop of the Upper Midwest.

Maxwell Aircraft Service – which is based out of Crystal – specializes in aircraft propeller, governor repair and overhaul. They are known to pilots for their high-quality craftsmanship and fast service. All work done by them is backed by a one-year 1,000-hour warranty.

Maxwell Aircraft Service is a FAA approved and licensed company. In addition, they are an official Hamilton Standard, Sensenich and MT-Propeller overhaul facility, as well as an authorized Hartzell and Sensenich distributor.

They regularly undergo audits, conducted by Hartzell, that assures their capacity to provide top quality service. As a consequence, they are a recommended repair facility for Hartzell propellers. They are also an official McCauley service center.

Because of their years spent as a household name to pilots throughout the Upper Midwest, Maxwell Aircraft Service has received the Charles Taylor Master Mechanic Award – an award issued by the FAA or CAA to those with 50 or more years of civil and military maintenance experience.

Much of their business comes from word-and-mouth. They are well known and respected to those who know them. Maxwell Aircraft Service doesn't try to make a splash with flashy social media advertisements, and instead employs old-school marketing methods. For them, that largely means remaining an active member of the communities they serve. For example, they are a longtime sponsor of the City of Crystal's annual fireworks show. In addition, they prefer traditional print advertisements in local publications (Minnesota Flyer included).

Maxwell Aircraft Service is sort of an omnipresent force in the upper Midwest flying community. They are very active in both the University of North Dakota and Minnesota State University, Mankato's aviation programs and are often contracted to do repair work on their planes. They also maintain a strong presence in the local flying community, and can be found attending both the EAA AirVenture in Oshkosh, as well as the Tri-State Aerial Convention.

Maxwell Aircraft Service can trace it roots to World War II. It was founded in 1946 by Kenny Maxwell following the close of World War II. Kenny had polio, and was unable to fight in the war himself – but he did take the opportunity to enroll in car and airplane mechanic classes.

When the war ended, Airforce pilots returned home from Europe and the Pacific, bringing their love of flying with them. As flying proved to be a growing pastime among Americans, Maxwell Aircraft Service was there to service their planes.

In 1951 Kenny bought out his business partner and relocated Maxwell Aircraft Service to the Crystal Airport, where it is located to this day.

Today, the business is still in the family. It is co-owned by Kenny's son Butch and his grandson Davey.

The concept of family extends well beyond the bloodline at Maxwell Aircraft Service. Many of the company's employees have worked there for over 25 years. Today they employ roughly a dozen people.

"We take a family approach," said Davey. However, like any family, they aren't free from disputes. "We take great pride in what we do, so obviously there are conflicts of interests sometimes," he said.

Though Davey is one of two owners of the family business, he hesitates to call himself the boss. Instead he prefers to use the title "grunt," who completes whatever work needs to be done, no matter how grueling, right alongside his crew.

Butch, now age 79, has been working at Maxwell Aircraft Service for 62 years. He joined his father Kenny in the family business in 1958, after attending the University of Minnesota. Through his time at the family business, he has experienced every shift and trend in aviation first hand.

Though much of his work is in the never ending pursuit of technological progress, for example the shift from aluminum to composite plane parts, Butch remains wary of the direction his industry seems to be taking.

"The little guy has kind of been squeezed out of the market," said Butch. He said almost all propellers they now service are manufactured by large corporations.

However, according to Butch, Maxwell Aircraft Service still services its own niche. He says they regularly work on propellers that are over 50 years old that no other aircraft mechanics are willing to work on.

He also worries that the younger generation doesn't have the same interest in flying as those that preceded them. He cites rising costs of just becoming a licensed pilot as a huge inhibitor. He also feels that the government has become a little too comfortable regulating the airways, and thus making it more difficult to fly.

This is something that Davey echoes, noting a shortage of pilots over time. "We want aviation to be around a while," said Davey.

However, if history is in any way indicative of the future, Maxwell Aircraft Service has been around, and will continue to be around. It has been providing the same service for three-quarters of a century, spanning 12 presidential administrations, and still remains independently owned by the same family that started it. Looking towards the future, it is safe to assume that Maxwell Aircraft Service will continue to provide their services to many future generations of pilots.