From Sherm Booen's "Confessions of a Minneapolis Honeywell Tech Rep" 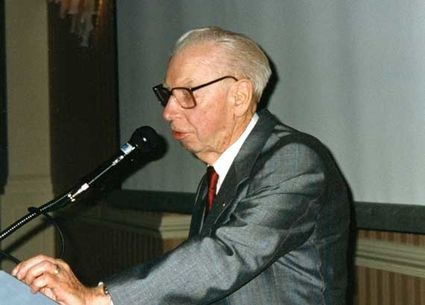 Jack Deveny took this photo of Sherm Booen at one of many speaking events over the years.

Noel Allard shared this excerpt from his "Sherm Booen" files. He promises "more to come."

Sherm Booen spent late 1943 and 1944 in Foggia and other US Air Corps bases in Italy. He served as a civilian tech rep of the Honeywell Corporation.

Though not Air Corps, he was emplaced with the 5th Bomb Wing and wore an officer's uniform. His job was to instruct flight crews on the use of the Honeywell C-1 autopilot to control a bomber on its bomb run while linked to the famous Norden Bombsight. Paraphrased excerpt.

General Lawrence, CO of the 5th Wing was adamant in the use of the C-1/Norden system to do the bombing. As a result, I was called on to fly with the lead crew and aircraft the day before it led a mission. We would take off and go to 30,000, and I would trim the C-1 for the proper flight and put a note on the control panel that it was not to be touched before the bomb run. (Everyone wanted to twist those 12 knobs)! The B-17 flies differently at 30,000 feet, especially with a full bomb load.

One of the General's key men was a Major Ryan, and he was a hot pilot, leading a mission often and always used the C-1, and it worked. We recorded more than a dozen landings without using the elevator.