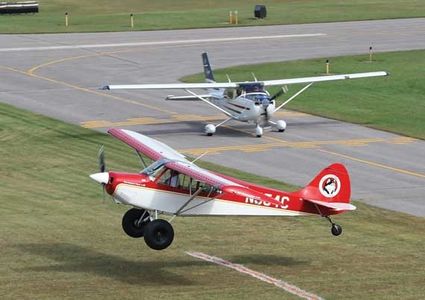 This was celebration of sorts for being able to save the turf runway at KMIC.

I served on several MAC committees about updating the 2020 comprehensive plan to a 2035 plan. The 2020 plan, completed in 2010, called for removal of the turf runways, removal of one of the parallel asphalt runways, as well as other downsizing.

I worked closely and extensively with Neil Ralston, MAC airport designer, to keep the turf runways for the significant number of taildragger aircraft on the field. We were successful in our design modifications and alterations to convince the FAA, MAC, and MAC commissioners of the needs of pilots on the field.

I was approached early in the summer by Phil Tiedeman, KMIC airport manager and Bryan Trinka, FAA ATC Tower Manager at KMIC. They requested that I create an event to highlight the turf runways at KMIC. CrySTOL FlyIn was the result of that effort in a short timeframe. Steve Otis was instrumental in organizing and pulling off this first try at this event.

Warren reports that they are hopeful to hold this event again next year. He states it is very expensive to put something like this together but they are going to try.

To see media coverage of the event, go to http://www.ccxmedia.org/news/crystal-airport-celebrates-turf-runway/.