One Piece at a time: Wilbur Orson's life as an aeronaut 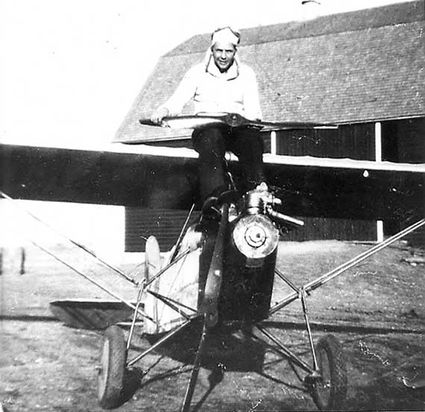 Walter Orson and his homemade aircraft.

Wilbur Orson has spent his entire lifetime in aviation.

Orson has aged right alongside aviation. At age 78 Orson has served in the U.S. Air Force, worked as an aircraft mechanic and taught aviation engineering in college. As a commercial pilot he as acquired the following certifications: ASEL, ASES, AMEL, F.E.-TJ, AGI, CFI-A and A&P.

His history of flying dates back to 1927, when Charles Lindbergh first crossed the Atlantic.

In 1927 aviation had captured the imagination of the world, spreading as far as the prairies of western Minnesota. Orson's father Walter, then just a 19-year-old farm kid from Spicer, had $200 and could see no reason why he too could not be an aeronaut. He had just one hang-up: he needed a plane.

Walter pulled what money he had from the bank and purchased a second hand Henderson four-cylinder motorcycle. Walter studied the engineering specifications necessary and acquired the necessary steel piping and wire.

Two years later, his plane was ready to be flown. His final product measured 16 feet long, with a wing span of 25 feet. All, except the propeller, was built with raw material by Walter and his brother Ole. The original motorcycle engine had been drastically reconfigured, having been sawed off to make it shorter. The wood bracing was made with basswood and spruce from nearby Green Lake. The speedometer from the motorcycle saw new life inside the plane, while seat belts were made from old pant belts.

Before he could fly, he would need a few lessons. Walter enrolled in the Wold-Chamerlain Aviation school in Minneapolis. Walter spent eight hours flying over a two week period and secured his student's permit for solo flying.

In spite of all of his schooling, his first flight didn't go as he hoped. Two years of work laid before him in complete ruin. But Walter was stubborn and got back to it. However, gravity proved a worthy adversary as Walter made a second take for the sky. Again, his plane laid in ruin.

Still, he persevered. He got back to work and retooled his plane. With the proper adjustments, Walter's aircraft finally took to the air.

Almost immediately Walter became a local celebrity. Large crowds gathered the see the Orson kid take flight on his homemade plane. Accounts at the time recorded him flying as high as 2,000 feet.

Eventually, Walter's father told him it was time to put the plane away and find a woman and settle down. A little more than a decade later, Wilbur came around.

"Flying is in the blood," said Orson.

Orson grew up in the small town of New London, Minnesota, one town over from Spicer. By this time his father had completely given up aviation to raise his family. However, flying remained part of the family lore.

In 1962 President John F. Kennedy was rapidly shifting U.S. foreign policy towards the tiny southeast Asian country of Vietnam. There a 20-year-old Orson found himself in the Air Force situated in the Vietnamese central highlands in the town of Pleiku.

He first landed in Pleiku in a C-124 Globemaster, which was affectionately referred to as Old Shaky. The plane had no insulation, or pressure for that matter. It didn't fail to live up to its name. Orson recalls the plane coming to a screeching halt as it tried to break in time on the short runway. The airmen unloaded their trucks and trailers and headed towards Pleiku. They were unsure what to expect, so they marched cautiously along with their rusty M-1 Carbines. However, they found the people were anything but hostile and welcomed the airmen with open arms.

There Orson, along with six other members of the Air Force, worked alongside the Army to provide radio telephone communications for the Army.

Once Orson and his fellow airmen settled into their compound, they set up their equipment and cracked open their C-rations, dated 1946. The food the army provided was largely powdered, but they also had local fruit like papaya and bananas.

They were housed in a mud hut, with a tiled roof and dirt floor. The windows had shutters, but no glass. Being in the tropics, there was no shortage of mosquitos; or bugs, snakes and rats. There they slept in cots decorated with mosquito nets. The nets may have helped to fend off mosquitos, but it wasn't designed for rats. Never mind the gunfire or explosions, to this day Orson still wakes up in the middle of the night thinking about rats crawling on him.

No one was properly trained to do what they were supposed to do. More than a few times tech-reps would have to show up and give a hand. Orson remembers specific trouble with the antenna coupler.

Orson and his buddy Rodney killed what free time they had in the highlands drinking Ba Me Ba, a warm liter of beer mixed with formaldehyde. They were told not to drink it, but, it was beer. Nearby there was an opium den, Orson never partook, but it was a real eye-opener for a 20-year-old kid from Minnesota.

Finally, Rodney and Orson received notice that they would be sent back to the Philippines. With almost no notice at all, the airmen boarded an old C-47 bound for Saigon. There were thunderstorms the whole way down that shook the plane. By the time they arrived in a tent city in Tan Son Nhut Air Force Base, they were exhausted. This time there were no mosquito nets, and their beds were a bloody mess by the time they woke up. They cleaned themselves and boarded the C-130 back to Clark Air Force Base in the Philippines.

Orson was discharged in March, 1963. However, Orson struggled to readjust to civilian life, and three years later he re-enlisted in the Air Force, where he was stationed in Japan. He spent two years in Japan before cross training into the Ground Search Radar, this time in a place a little closer to home – Waverly, Iowa. However, the base closed in the fall of 1969, so he was sent to another Ground Research site in New Jersey before being once again discharged in 1970.

In 1977, Orson seemed to miss the life of an airman, so he enrolled in the Minnesota Air National Guard for five years, and then the Colorado Air National Guard for another year-and-a-half, and then the Air Force Reserve at the Offutt Air Force Base in Omaha and the Air Force Reserve unit at the Kelly Field Air Force Base in San Antonio. Finally in 1991 after 31 years, Orson retired from the military with the rank M/Sgt. E-7.

Orson's love of flying didn't commence when he left the Air Force. When he was discharged from the military, he was free to attend the 1970 EAA AirVenture Aviation, something he's tried to attend every year since.

Everything Orson did seemed to involve flying in one way or another. He taught airplane mechanics during a eight-and-a-half-year stint in Aurora, Colorado and in the 1990s he took a job as an actual airline mechanic for Northwest Airlines.

However, it hasn't all been one smooth flight for Orson. In the 1990s he underwent heart bypass surgery. This completely threatened his commercial pilot's license. He had to get special insurance from the FAA that was expensive and slowly crippling Orson's bank account. In 2006 he decided it was no longer worth it, and he retired his wings. "It was terrible, I felt so bad about it," said Orson.

The whole process had been expensive and aggravating, Orson had grown completely disheartened. But in 2009, the FAA announced a new classification of flying, Light-Sport Aircraft (LSA). Though it was severely limited in comparison to a regular commercial pilot's license, it required no medical. When Orson saw the new classification, he recalls thinking "alright, lets do this."

In 2014, at the EAA AirVenture Aviation, Orson wrote in for a RV-12. He didn't order it from the factory, he ordered the experimental-LSA kit. Orson notes that there is no real reason to build a plane from a kit, except for it just seemed like more fun. Like his father a century before him, he was going to build his plane from the ground up.

The plane arrived in pieces. Orson set up shop at his brother's business – Orson Electric – in downtown New London and assembled his new plane one piece at a time. 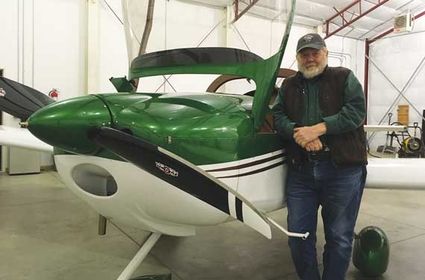 Wilbur Orson stands in front of his RV-12 at his hangar at the Paynesville Airport. Orson had intended to take his plane for a late-autumn flight but it was halted by the rain.

It took Orson three years to assemble his plane. First he built the tail feathers, before he moved onto the more complicated work. The four-cylinder Rotax engine arrived in a wooden box marked from Austria. "If I screw this up I'm in big trouble," Orson recalls thinking. Though the only engineering hiccup Orson encountered was when he installed the computer monitor, he noticed the sky was on the bottom and ground on top of the screen.

He painted it green and white, trying to mimic his kid sisters old '69 Pontiac Firebird. He opted for a beige interior.

In 2017 his plane was completed. His brother and him took it from the shop and onto the road, where Orson discovered just how light-weight his new LSA was. The wind blew it over, denting the wing.

Still Orson once again had his wings, and was ready to take to the air. He stores his plane at a hangar at the Paynesville Airport. To this day Orson estimates he has spent 125 hours on it.