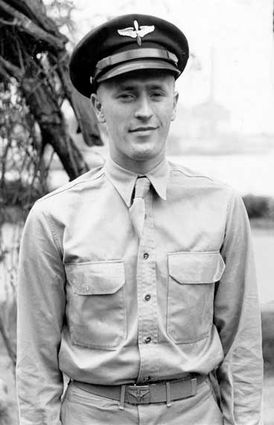 Glenn Hovland was a native of Austin, MN. Glenn's aviation interest was sparked at a young age after his first airplane ride in a Piper Cub. In 1941 he enlisted in the Army Air Corps and became a flight cadet; soloing in 1942. He went on to earn his wings and a Commission as a 2nd Lieutenant. He was assigned duties as a flight instructor at Yuma, AZ, Pecos, TX and Lincoln, NE accumulating over 2200 flight hours,

After he transitioned out of the of Air Corps in 1945, Hovland embarked on an extensive aviation career beginning as a civilian instructor at Oxnard, CA. In 1946, he moved back to Austin, MN. There he flew charter flights across the country for local businessmen in a Navion aircraft, which was named "Spam Town" after his hometown's most famous product. He partnered with Austin Aero Service and continued flight instruction while serving as a Civil Air Patrol Commander. During this period, he flew charter flights for several well-known politicians such as Adlai Stevenson, Estes Kefauver and President Eisenhower.

In September 1955 he was hired to ferry Lockheed Lodestars from Spain to Minneapolis where they were to be demilitarized and sold for civilian use. It was during this time period, Hovland worked as a "chase" pilot for high-altitude balloons. These balloon flights were launched for weather research by Winzen Research (under contract to the US military), General Mills, University of Minnesota and Raven Industries. By 1959, Hovland was recognized as one of the world's top balloon trackers using special tracking equipment on his various airplanes. He tracked balloons piloted by Joseph Kittinger in the "Man-High" Project from South St. Paul. Those balloons reached altitudes of 95,000 feet. Under a follow-up project, he tracked Major David Simons on another epic flight that topped an altitude of 101,000 feet. Hovland's photographs of balloons appeared in many publications, helping to dispel public belief that "flying saucers" existed.

Hovland later began working for Minnesota Airmotive and regularly flew with Hormel Company officials. Hormel executives requested Hovland's aviation expertise to select a new corporate aircraft for the company; they hired Hovland as the pilot. He then began a 21-year career as a Hormel Corporate pilot. During his career with Hormel he selected several of the company aircraft. Hovland received the National Business Aircraft Association's prestigious "Pilot Safety Award" for flying over 2 million air miles without a personal or property mishap. Placing a total on Hovland's career flying hours is difficult because many of his balloon chase flights were classified and were not logged even though those flights were documented in newspapers. It is probable to say he flew at least 6800 hours chasing balloons and his logbook would show over 40,000 flight hours when he formally retired in 1982.

NOTE: The end date for nominations for the 2021 Minnesota Aviation Hall of Fame induction is November 30th. The guidance for nomination is located at our website http://www.mnaviationhalloffame.org/nominations.html