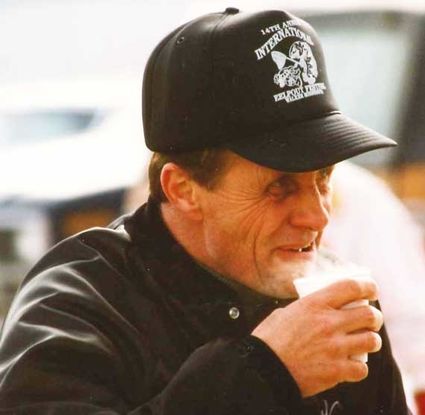 Ken Bresley at the Eelpout Festival.

Ken Bresley was crazy about the bracing cold of winters in Walker, MN. Or maybe he was just crazy. Every February Ken would lead the "plunge." A group would cut a hole in the ice on Leech Lake, then jump in. It's all for a good cause, and part of the Eelpout Festival. It raises money for the Community Center and brightens the local economy during the long winter in Northern Minnesota. The Festival was pretty much Ken's invention. If he was crazy, it was like the proverbial fox.

Walker is a tourist haven in the summer, but winters can get very quiet. Ken Bresley was thinking about how to attract some winter visitors when he hit on the idea of a cold weather festival. Eelpout are a close relative of the saltwater cod, and possibly the world's ugliest fish. They thrive in northern Minnesota. Eelpout are fished commercially for their oil, but don't attract much sport fishing. There are a lot of them in Leech Lake, so that's the theme Ken used to attract people to Walker in February.

Promoting things came naturally to Ken. He had a degree in Marketing from Loyola University, but you won't go far in that field without talent. Ken had plenty of that. He could sell just about anything. Early in his career he did business development for several large firms around Chicago that were into food and steel.

In 1978, Ken moved to Walker to sell bait and fishing tackle, then branched out into the restaurant and theater businesses.

Later endeavors took him to automobiles and housing. He also got into the local aviation scene flying his Cessna Skyhawk XP float plane for fun and a Cessna Cardinal for transportation.

Sometimes the system works and smart people who are successful in business get involved in politics. By 1990, Bresley was a member of the Walker City Council.

A municipal airport had been constructed in 1951 and improved in 1971, but by the time Ken got to City Hall, the airport was a pretty sleepy place. Consideration was being given to closing it when something to the effect of "Ken's a pilot, let's make him airport manager" was said. He took the job to heart.

Bresley knew that access to the aviation system was good for the local economy. He also knew that the Walker Airport was under-used because hangar space wasn't available and it was nearly impossible for transients to buy fuel.

He rounded up some funding from the State and soon Walker had a new "tee" hangar and state of the art self-service fueling. As expected, traffic increased. More and bigger aircraft wanted to fly to Walker, so Ken set about getting the City qualified for Federal Aviation Administration funding.

With State and Federal backing, the City extended the runway to 3200+ feet and constructed a full-length parallel taxiway for increased safety. The whole improvement program was topped off with a new Arrival/Departure Building. Ken knew the modular building business and came up with the "A/D Building on a truck" idea. Of course, it wasn't that simple, but the new building's cost was about 60% of conventional construction. Without knowing it, Ken had developed a template for future A/D buildings at GA airports.

Walker's success resulted in a lot of phone calls from other airports asking Ken, "how'd you do that?" He would share his A/D building idea, but also tell the other folks how to improve traffic and generate public support for their airport. Plenty of consultants offer that kind of advice, but Bresley didn't take any money. He did it to help support aviation, although rumor has it that callers were encouraged to sponsor his participation in the "Polar Plunge."

In 2012 the Minnesota Council of Airports held their annual convention in Rochester. Walker was recognized as a leader in airport planning, development, operations and public relations. The City was presented with the FAA/Governor's Award which Ken Bresley accepted.

All of this would be a great story about a local pilot and airport advocate except Ken Bresley wasn't the typical "local pilot." His aviation career started in a warmer place that was a real contrast to the peaceful woods around Leech Lake. 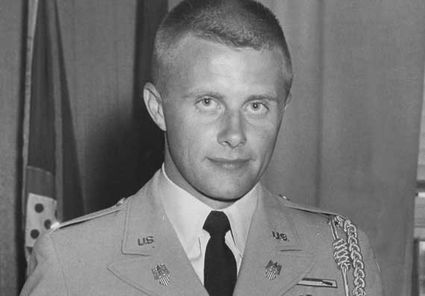 Ken Bresley during his time in the military.

Vietnam was not a name everybody recognized in 1962. Later the country would become a watershed in US military history, but that was a few years into the future. Kenneth Virgil Bresley became a commissioned officer in the United States Army that year. Lieutenant (later Captain) Bresley played a dramatic part in making that history. He was primarily a helicopter pilot, but also trained as a paratrooper and ranger. He served two tours in Vietnam. For his gallantry, Bresley was awarded both the Silver and Bronze Stars. He received several other decorations including the Air Medal and the Army Commendation Medal. For being twice wounded in combat he received the Purple Heart. During part of his second tour, Ken commanded an infantry company in a battalion led by Alexander Haig. When not in Southeast Asia, Captain Bresley was stationed at the Pentagon and worked as an aid to Robert McNamara, Secretary of Defense

Given his military record, Ken Bresley could easily have become a general officer like Haig did. Instead he became a civilian in 1968. That was a good thing for Walker, for Minnesota and for Aviation everywhere.

Ken would later take a much different military role volunteering his time, talents and aircraft to the Civil Air Patrol (CAP).

An engineer that did a lot of work on the Walker Airport said, "Ken was more a mentor to me than a client." That would pretty much sum things up. Ken Bresley was a smart man who was willing to share his wisdom.