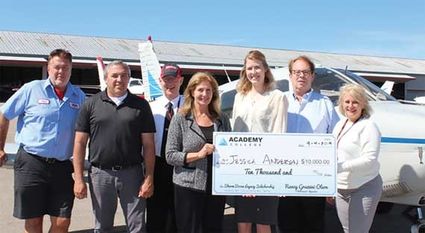 Meet Jessica Anderson: Minnesota native, Jessica Anderson, still remembers the flight that hooked her into aviation, even though she was just two years old and in a car seat! Fascinated, albeit slightly terrified of heights at the time, her obsession with aviation took off from there. As a first generation female pilot, Jessica lives and breathes aviation, even inspiring her eight-year-old niece to get her pilot's license! She is passionate about giving back to her community through volunteering with children and working with outreach programs to educate and encourage others to pursue their dreams in this field. In 2014, Jessica took a chance on her dream and began to take flying lessons. In 2018, she decided to turn her dreams into a career and enrolled in the Commercial Pilot program at Academy College. Successful in both the classroom and in the air, Jessica's future in flight is very promising. Congrats, Jessica!

Sherm Booen was born on a farm near Glenville, MN. He was a B-17 civilian test pilot during World War II and moved to Richfield with his wife and daughter after the war. He then worked in radio and television and successfully published the World of Aviation and his magazine The Minnesota Flyer. WCCO TV showed his World of Aviation every Sunday morning for over 28 years. Sherm was inducted into the Minnesota Hall of Fame in 1995. Over the years, Sherm became known as the voice for aviation in the state of Minnesota.

Contact Academy College at 952-851-0066, or email scholarship@academycollege.edu for scholarship details.