CC Miline Popcock used extreme attitudes. CC is an instructor who travels the country giving instructions on how to safely get the best performance out of your aircraft at minimal airspeed to achieve short takeoff and landings.

Milaca has one of the nicest grass runways in the state which proved to be an ideal setting for this Short Take Off and Landing event.

There were over 75 aircraft that flew in for the event including two helicopters, with 27 experienced pilots in the competition to see who could land and takeoff in the shortest combined distance.

Competitors from Alaska, Kansas, Minnesota, Wisconsin, Nevada, South Dakota and other states it was a true midwestern event.

The event was organized by Jeff Pohl of Milaca who together with many volunteers made this an event that will set the standard for future competitions with over $15,000 in prizes it draws from all over the Western US.

The event started with practice on Friday evening for those camping under the wing of their aircraft and dinner Friday night.

On Saturday the official competition started with a safety briefing. There was food available all day followed by a pig roast supper and award banquet in the evening. This was followed on Sunday with the annual fly-in breakfast. 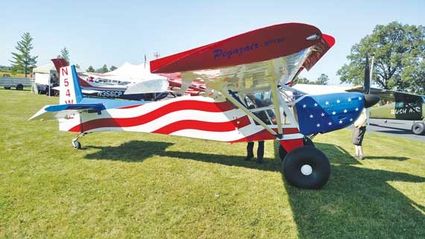 Jerry Drew came in from Alaska and is the air boss at the STOL event in Valdez, Alaska. His experience was very important to this first local event and made for a safe, fun demonstration.

Because the airport was open during the event, they had Jerry Drew monitoring the competitors on one frequency and Joel Burkland monitoring the Unicom for Milaca to ensure safe transition of all aircraft.

There were different categories of aircraft competing depending on weight and size of the aircraft.

Two pilots used the same aircraft and competed against each other to make it a true test of piloting skills.

Jeff and his crew did an outstanding job at pulling this event together.