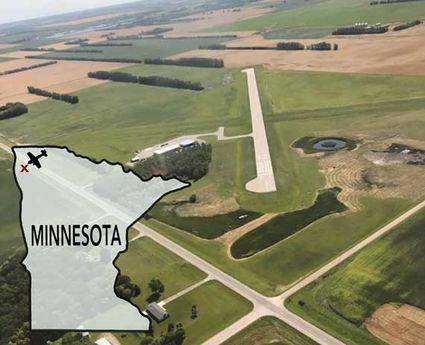 Photo courtesy of the City of Warren

Warren is the seat of Marshall County and the home of the "Settlers Square Historical Museum." It's a great museum with all kinds of exhibits including a 1977 Ford LTD. The old Ford is beat up. It has a badly cracked windshield, a broken headlight and a bunch of dents in the hood. Once a patrol car for the Sheriff's department, it's an artifact from the best documented encounter between earthlings and extra-terrestrials. People come from all over to check it out, so visit Warren and join the crowd. If you don't have a flying saucer to get there in, the City has a first-class general aviation airport for more conventional flying machines.

Warren Municipal Airport features a 3200 foot-long paved and lighted runway. A turf secondary runway is over 2600 feet long and will keep the tail draggers happy. There's a generous aircraft parking area. The Arrival/Departure building opened in 2018 and has all the expected facilities. A courtesy car provides ground transportation. For less than ideal weather conditions, a RNAV approach is available.

Marshall County is in the heart of the Red River Valley, one of the most fertile regions in the world. During the growing season, Warren gets a lot of activity from agricultural aircraft. Student pilots from the University of North Dakota come to practice there. All that, plus the routine traffic adds up to over 50 average daily operations. That's a lot of takeoffs and landings, but the total is often over three times that in the summer. Pilots flying to Warren need to follow the traffic pattern rules, keep the scan going and listen up for the radio.

Settler's Square has some more conventional exhibits including a recreated main street of a generic small town from the late 1800s. Warren has an excellent park system including walking trails, a community pool, and a campground. Golf courses for both balls and discs are in town. If you prefer to sleep with your plane, "underwing" camping is permitted at the airport. If it's cold out or you just don't like roughing it, there's a motel and several good eating places. Not into UFOs? The Agassiz Audubon Society is nearby, where you can watch many variants of the species that invented flight at the Two Rivers Watershed Impoundment.

Like many towns in rural Minnesota, Warren was platted by the railroad. In this case it was the "St. Paul, Minneapolis and Manitoba." The railroad's chief passenger agent, Charles Warren, named the town after himself. The rail line reached Warren in 1879 and settlers began arriving in 1880. A post office was established that year, and the City was incorporated in 1891. The railroad was later renamed and became better known as the "Great Northern."

Marshall County was also established in 1879. There was some fuss about it, but Warren became the County seat. A general election was held that November and Willis T. Lackey became the first Sheriff. One hundred years after Sheriff Lackey was elected, Deputy Sheriff Val Johnson was on a routine night patrol driving the LTD now in the Settlers Square Museum. He suddenly saw a very bright light moving rapidly toward him. Blinded by the apparition, he still managed to keep his squad car on the road. Johnson lost consciousness for forty minutes, but he came-to and called for backup. A physician who examined Johnson said he had suffered an eye irritation very much like the burns that would come from exposure to arc welding without eye protection. Both the History Channel and Travel Network have aired shows about the incident.

In 1965 the Warren City Council voted to build a "Modern Airport" that was estimated to cost $109,000. A dedication ceremony took place in August of 1966. Not only was the cost reasonable compared to the 21st Century but building an airport in one year was a huge accomplishment, even for the 1960s.

Perhaps it took a while for the news to reach Alpha Centauri, after all it's almost four and a half light years away. Maybe the visitors that Deputy Johnson encountered were just looking for the new airport. To the members of the 1965 Council that took that first big step to bring air transportation to Warren, they would surely have said "Mission Accomplished."