His Dreams are Taking Off 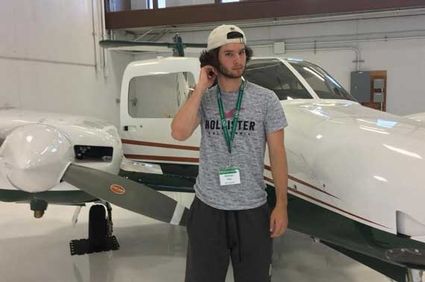 Michael Lilya, 19, of Moose Lake always wanted to fly. One of his first words were "plane," said his mother Sheryl.

"As long as I can remember, I have wanted to fly," Michael said.

In March 2018, he took his girlfriend, Kaitlyn, to the fly-in at the Cloquet airport and found a pilot to fly the two of them to Moose Lake. He had a special question to ask Kaitlyn.

As they flew low over the Lilya home, Michael asked Kaitlyn to look in the yard, and she saw the question that he and his mother had stamped out and spray painted in the snow earlier that morning.

"Prom?" the question read. "She said yes," Michael recalled. "I didn't know anything about flying then," he said. "We flew over the prison and alarms were going off all over the place, we heard later."

To test his wish to fly, Lilya and three friends went to Superior, Wisconsin, to skydive. "I went skydiving last summer," he said. "I thought that would keep me from wanting to fly but, no, it didn't. It was really fun! It was a lot more peaceful that you would think that it would be." Lilya said that they were well prepared before the skydive. "It took five hours for the four of us to go," he explained. "We only jumped one at a time."

Michael is now a student at the University of North Dakota and has completed his first year. His dream to fly a plane has now come true. "I've had 29 lessons at UND," he said in a recent interview. "Lessons 25 and 29 are stage checks."

Lilya's dream is much more than just flying a plane. He is studying to become a commercial pilot at UND's John D. Odegard School of Aerospace Sciences based at the Grand Forks Airport. "I will be going through a series of classes and earning ratings and licenses throughout college," he explained. "I'll become a private pilot, then earn my instrument rating, and then I'll earn the dual engine rating. I'll come out of college with a commercial pilot's license and some ratings." Lilya added that the airlines that hire graduate students with a commercial license train the pilots further. Normal college classes are part of the curriculum for students earning their pilot's licenses, Lilya explained. "I'm getting my generals," he added. "Flight is just a class. My minor is English but I am thinking about changing that to atmospheric studies."

Operating the controls in the plane for the first time was a new experience for Lilya. "It felt weird at first but then I found it to be easier than I thought it would be," he said. "Other than landings and maneuvers, it's pretty easy. Getting the hang of making radio calls was the hardest part."

Lilya is not alone in attending UND to learn to fly. "About half of the freshman class is in aviation," he said. "We fly in a single-engine Piper Archer as we take the first course to become a private pilot. Later, we will learn to fly in the dual-engine Piper Seminole."

Lilya has flown alone twice. "My first solo flight was a traffic pattern solo," he said. "In the second one, I had to go in a circle and land. Every flight that I've had takes about an hour and a half."

Lilya hasn't had any hair-raising experiences when he's flown but his instructor told him of one. "In the first flight on one of the planes right after they got it, there was a bird strike," Lilya said. "They were able to land the plane but they had to replace the whole wing. Most accidents are where the plane goes off the runway into the grass."

As Lilya spends more hours in the air, he is becoming as comfortable with it as driving a car. "It's really fun," he said. "After you are up there so long, you forget that you are flying. During the first couple of flights that I took, I felt like I was going to hit the ground and crash. Now it feels fake, I don't feel like I am flying."

Weather sometimes keeps him grounded. "I've been weathered at times," Lilya said. "When the visibility gets too low, we have to cancel." 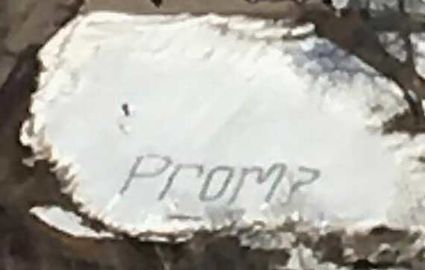 Michael's unique way of asking his girlfriend, Kaitlyn, to the prom in 2018.

Lilya is serious about his chosen field of study. "I study everything that there is to know," he said. "It's hard work to keep my grades up but it is easier than I thought it would be. I don't think that I have had a hard class yet."

Michael won't be alone at UND next year. His brother Danny will join him and train to be an air traffic controller.

Danny was born with a broken back and spends his days in a wheelchair. Their parents applied for special FAA clearance for Danny to join the air traffic control program. They received word in mid-June that he was accepted and learned that he will be the first disabled student in the program.

"We will have one son in the air flying and one son on the ground controlling the air traffic," said their father, Dan.