From the Archives August 1972 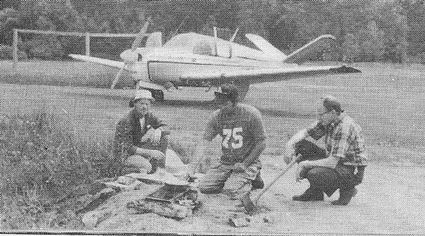 Old 758B climbed out of FCM into a cloudless sky one Friday in July, and set course for Longville. In the right seat was son-in-law Bill Roberts, his lap full of maps and charts. He was getting his first real lesson in pilotage. The baggage compartment was full of fishing gear, which we hoped to use to some advantage the next two days. Skirting the big lake, we flew over John Reidl's beautiful Crow Wing County airport, then past Breezy and Cross Lake, before reving down for the approach to Longville. There were thin scattered white puffs of clouds at 3000, just right for exciting color movies for "World of Aviation." A few circuits of the area, and the gear came down for landing, as Bill called off the check list.

Marv Kellogg and his wife met us at the ramp, helped us tie the V tail down, and we were off to the little village of Longville, really just a nice walk away. Marv is the owner of the Northwoods Sports shop, and a civic leader of the town. He is a pilot, in fact he just purchased a Maule on floats, one of the few around here, and uses it to commute to another store in Warroad. A few pictures, a quick lunch, and we were off to one of the many lakes right nearby. There we met Ted Capra, our fishing host for the day, and we were fortunate to get him to take us fishing. He represents several lines of fishing gear, and is really a professional fisherman.

Everything was ready, so to the dock we went, fishing rod in hand. Ted said we didn't need much, as he had the right tackle - the Lindy Rig! Making good use of the fish locator, Ted slowed to a troll, and the first catch was a prize, for me at least, a four pound walleye, golden scales, and full of fight. We moved a few times, (Ted said it was pretty slow fishing), but it wasn't long before we had a day's limit for Bill and me, and not before Bill got a real thrill when a muskie took a whack at a good sized perch he was reeling in. The wily pike swirled about 10 feet back off the boat, and cut the perch to ribbons.

With our limit of walleyes, Ted, a real muskie fan, asked if we wanted to try our luck with the big ones. We sure did, and for the next couple of hours we raked the lake with colorful lures. Didn't see any, but that's muskie fishing. Ted has taken over 50 from the lakes in the Longville area in the last few years, the biggest more than 33 pounds, beautifully preserved, and mounted on the wall of his cabin.

Early the next morning Ted picked us up, and we were off again for a few walleyes for "shore lunch." About noon, under cloudy skies we returned to the landing, met with Marv, and built a small fire on the side of the airport, with old 758B as a backdrop. It was proven to us again that there is nothing better than fresh caught walleyes.

Threatening skies, promising more rain, as Bill and I nosed 758B into a southerly breeze and limited visibilities enroute to BRD. We landed just as a NCA 580 taxied out, checked the weather, filled IFR at 4000, and headed for home. It was Bills first experience in the clouds, and he enjoyed the sights between layers, and into the rainy stuff. Approach radar put us right on the 090 approach to FCM, and we broke out over Riley Lake at about 2000 feet, for a straight in landing.

Thanks to Marv Kellogg and Ted Capra for their generous hospitality, and another memorable trip "around the patch." Bill and I can recommend Longville for flying and fishing.