Being a Medical Helicopter Pilot 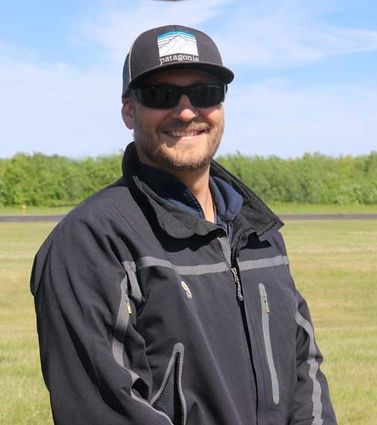 Neal McCafferty found the perfect place to live and raise his family when they moved to Baxter, near Brainerd, to pilot helicopters for Life Link III, an air ambulance. "I'm loving my job and family life in Minnesota is spectacular," he said in a recent interview.

McCafferty flew the Life Link III helicopter to the fly-in, drive-in breakfast at the Moose Lake-Carlton County Airport on Saturday, June 15. Another air ambulance came from North Memorial Hospital in Robbinsdale. "We came to do public relations," he said. "I enjoy this. We got here in time for a good pancake breakfast."

McCafferty explained that there are nine Life Link bases in mid to northern Minnesota and Wisconsin. He flies out of the Brainerd base and covers an area as far away as Michigan for transporting patients.

It all started in Golden, Colorado, where McCafferty grew up and graduated from high school. He went on to college at the University of Colorado in Denver and was studying to be an engineer. "I wasn't too happy where my path was taking me," he said.

A trip to Hawaii changed his plans in more ways than one. "I went to visit my brother and propose to my girlfriend, Breanne," he said. "My brother was a helicopter tour pilot and took us over the volcanos and the beautiful waterfalls on Maui. That was in November 2008." Breanne said "Yes," and they married on February 21, 2010. They are now the parents of two children, a daughter, 8, and a son, 5, McCafferty said. That trip in the helicopter torched a spark in McCafferty. "Someone suggested that I make some phone calls, and that led me to flight training in a helicopter," he said. "After that first flight, I was hooked. That was my first flight with an instructor."

But there was another reason why McCafferty wanted to learn to fly helicopters. "My brother died shortly after we had been to Hawaii," he said. "My first flight in a helicopter was in tribute to him. Sometimes a death can change the trajectory of your life."

McCafferty explained that the first helicopter was a very basic Schweizer 300c with no governing system. "It was basic instruction," he said. "It wasn't moving as swiftly as anticipated. I was working as a glazier on construction, remodeling our house and going to college. "A friend of my brother from Hawaii had moved to Washington to instruct helicopter pilots. "My wife and I had a long conversation about it. We finished the house, rented out the property, put college on hold and moved to Olympia, Washington.

God and faith led us in the right direction but we didn't realize it until years later."

McCafferty earned the CFI and CFII ratings, and then taught for a year. He also worked at the airport. Accumulating hours in flight is necessary before a pilot can be employed. "Typically, when you get out of school for a commercial pilot, you have 200 hours," said McCafferty. "As I taught, I accumulated 800 hours. You need 1,000 hours to get a job."

McCafferty's first job was as a helicopter pilot in Las Vegas flying tours out over the Grand Canyon. "The weather conditions surprised me and everyone else," he said. "It was so windy and so hot. I was flying in high density altitudes. Most of my flying was out over the west rim of the canyon. Typically, I would carry six or seven passengers. I would squeeze them in."

McCafferty said that he flew Eurocopters, EC 130s. "Now they are flying H130s," he said. "I flew two different models of the H130s. There was also the A-Star, or AS350. They still call them that.

"I was the lead instructor pilot when I was out there. We flew people from all over the world out on the tours over the canyon. There were people from China, Russia, Korea, Australia and England." After a couple of years of flying the tours, McCafferty was looking for something different. "I had been checking the job board on the Internet," he said. "We didn't want to move again. Brody had been born in Washington and Kennedy had lived in five states. "I interviewed for a job in Hibbing. They told me that, if I waited nine months, they were going to open a base in Brainerd. We looked at the school district and other qualities about the area and decided that was the best place for us."

Hockey was a draw. "I grew up playing hockey, and I knew young men from Minnesota," said McCafferty. "It was very easy to choose Brainerd over the other states that we looked at. We just wanted to get out of the heat; the heat was terrible. And my wife likes four seasons."

The family now lives in Baxter and McCafferty is one of four pilots that fly out of the Brainerd base. They have lived there for two and a half years. Brainerd is vacationland for many. "We go anywhere and take patients anywhere," said McCafferty. "Many of our patients are from the Cities and want to go back to the Cities." 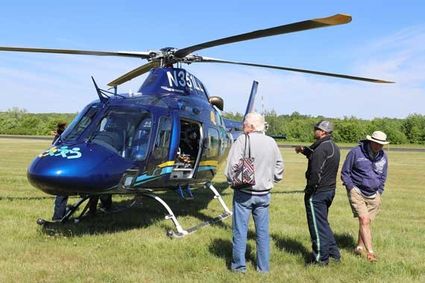 Pilot Neal McCafferty, center, explains details about the AW119KX helicopter that he flies for Life Link III when he was at the Moose Lake Fly-in, Drive-in Pancake Breakfast on June 15.

Weather is a big factor when flying. "We can't go into the clouds," he said. "There are visual flight rules, VFR. We have to be able to see what we are doing. We wear night vision googles at times. Those help us to see, like when we are flying to Grand Marais."

McCafferty is appreciative of the emergency crews that set up landing zones for the helicopters during the night. "It is amazing what they can achieve," he said. "Safety is always a priority. They have all been trained to set up landing zones. We always have to land into the wind. They know that and set up a zone away from trees, power lines and pay attention to the wind."

The air ambulance that McCafferty flies carries one nurse and one paramedic, McCafferty said. He works 12 hours a day for seven days, and then has seven days off.

As he looks back over his life as a pilot, McCafferty knows that he is doing what he was born to do. And he is still honoring his brother.