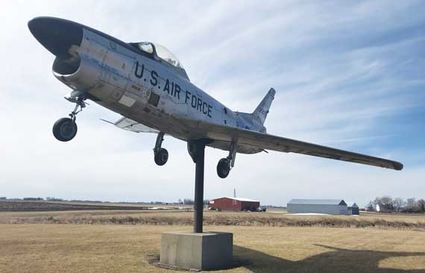 Photo courtesy of the City of Wells

"Wells to go Dry" is a headline that could have happened.

In 1913, seven years before the United States government enacted national prohibition, a local election prohibited consumption of alcoholic beverages in the City of Wells. People went thirsty until the 19th Amendment was repealed in 1933. That year, seven new licenses to sell beer were issued. By 1948 the City had decided to "join them" and opened a municipal liquor store.

A 1988 headline could have read "Air Force bases Sabre Jet at Wells."

Wells Municipal Airport has a gorgeous 2900-foot-long lighted grass runway. A jet fighter could land on it, but that would never meet the definition of a great landing (one you can still use the airplane after).

The F-86 at Wells is a gate guard mounted on a pedestal. It's still officially property of the U.S. Air Force, so the headline would be literally correct. The Wells Sabre is a rare F-86L characterized by the large nose mounted radar. Of almost 10,000 Sabre Jets produced between 1949 and 1956, less than 10% were "L" models.

Besides the runway, airport facilities include a rotating beacon, paved apron, and the comfy Arrival/Departure Building that's open 24 hours. An FBO provides complete aircraft maintenance. Between 8 and 10 aircraft (not counting the F-86) call Wells home including an agricultural aviation operation. Fuel is full service. Just call.

In 1871, Clark Thompson was the largest landowner in Faribault County. The City he founded that year was named after his father in law, J.W. Wells. Mr. Thompson was both rich and generous. He dedicated 53 acres for a public park which is now part of a system that totals over 80 acres. In the 21st century, City park facilities include fields for baseball, softball and soccer. There's a golf course too. Thanks to Mr. Thompson, Wells was (and still is) very much a railroad town. There's no longer passenger service, but the depot, built in 1903, has been fully restored and houses a museum that includes many interesting exhibits.

Wells has a long history as a progressive community. Amenities like an electric plant, street lighting, public library, sidewalks and municipal water were established in Wells before many other towns of similar size. The wells in Wells are not dry, and they produce some of the best quality water in the State.

Other services pioneered by the City included a Board of Health and Fire Department. The power plant is still in operation and uses six surplus submarine diesel engines to power its generators.

Wells has also ventured into the entertainment business. The local movie house is owned and operated by the City. It was called the "State Theatre" in 1959 when it caught fire while showing "Cat on a Hot Tin Roof." After it was rebuilt a contest was held to select a new name. The theater is now called "The Flame." First run films are shown Friday to Monday. Admission is $4, or $3 on Mondays. You could fly your family to Wells for a movie and easily come out money ahead.

There are some good eating places in town too, so combine a trip to the movies with the $100 hamburger. If you patronized the municipal liquor store during your stay and need to spend the night, under-wing camping is available for pilots and passengers.

In the 1930s aviation caught the attention of the Wells Chamber of Commerce. Several members began looking at sites to develop an airport, but World War II happened. The search resumed after the war and in 1957 the Minnesota Department of Aeronautics reviewed the sites. The City was given direction on how to proceed.

Land was purchased in 1964 and the Wells Municipal Airport opened in August 1966. Sherm Booen (founder and first publisher of the "Minnesota Flyer") served as Master of Ceremonies for the dedication. Miss Wells cut the ribbon and the first Wells fly-in celebrated the grand opening.

The fly-in continues to be a tradition currently on the last Sunday in June. It's been going on for 47 years.

Total cost of the Wells Airport was $40,717 including the land. It was a real bargain considering more recent costs to develop similar facilities have exceeded $1 million. After the dedication Booen talked about Wells on his TV program, "World of Aviation" saying, "it's a wonderful place and well worth the trip." Fifty plus years later that's still a very true statement.