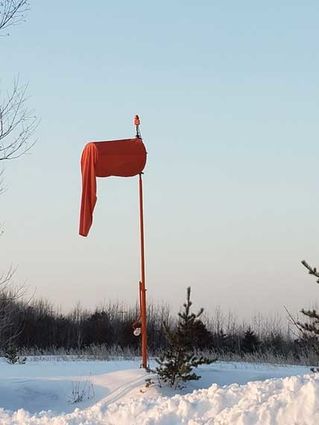 Special to the Minnesota Flyer

Wichita, KA. Lawrence McCabe, Minnesota's Commissioner of Aeronautics, speaking at the annual conference here of the Aviation/Space Writers Association, won praise for a plan to install 12-foot, blaze-orange windsocks at airports in his state.

McCabe, who also is president of the National Association of State Aviation Officials, was one of five panel members discussing "the greatest challenge facing general aviation in the "70's."

The Minnesota commissioner addressed himself chiefly to the benefits for transportation and safety that go with having an adequate system of airports in smaller communities both to serve the public and to take traffic and pressure away from the large facilities needed by the airlines.

He described Minnesota's extensive system of VOR's, safety seminars, and pamphlets detailing the economic benefits of an airport network as well as the oblivious economic value of a large hub terminal. In comment on plans to replace the traditional drab cotton windsocks, he described the 12-foot long, 3-foot diameter windsock being introduced for Minnesota. This windsock is of synthetic material, and its blaze-orange color is luminous for the greatest possible visibility.

"I can't give you any statistics yet," McCabe told the meeting of top aviation writers and editors from newspapers and magazines, "but next year at your convention I hope to report facts and figures on a very significant reduction in fender-bender accidents, many of them caused by failure of a pilot to pay proper attention to wind direction, and often as not, because the windsock was not too visible." McCabe said he is confident that the reduction in accidents achieved by just this simple device would result in lower insurance rates eventually, just as automobile drivers will be earning lower insurance rates when cars are equipped with better bumpers.

Dwane L. Wallace, chairman of the board of Cessna Aircraft Company, who spoke on the same panel, endorsed McCabe's support of non-metropolitan airports, saying "we need many new airports to serve the best airplanes ever on the market for general aviation. The job for us is to fill the gap between the wheel and the jumbo jet," Wallace added.

Another panelist, Patricia Hughes, who is director of general aviation programs for the Flight Safety Foundation at Washington, D.C., said after the formal session that the Minnesota windsock proposal was one of the most original safety suggestions to come before the meeting and indicated that Flight Safety Foundation will assist in publicizing the idea. Mrs. Hughes is herself a top experience pilot in many types of aircraft, having flown high performance military planes, including two-engine and four-engine bombers, on ferrying missions during World War II.

All the panelists agreed that general aviation has to do a better educational job to increase public understanding of the benefits of air transportation and to keep the increasing number of fliers constantly alert to the importance of safe procedures as a major step in cutting the cost of small-plane flying.

Because the 1971 annual meeting of the aviation writers was held in Wichita, the home of Beech, Cessna, and Lear, the convention program gave more than usual emphasis to the prospects of general aviation in this decade.