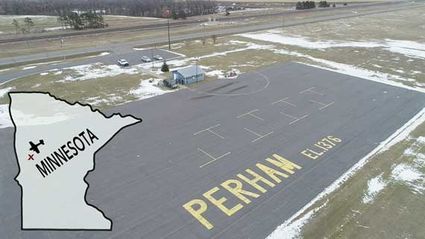 Photo courtesy of the City of Perham

Perham Municipal Airport is located just northwest of the city between the old and new versions of US Highway 10. In the "good old days" there was a popular drive-in movie theater on the old highway next to the airport. A symbiotic relationship existed between the two. The "silver screen" provide an informal visual aid for the pilots, and the runway gave the local teenagers an alternate access to the movies. Apparently, the kids would turn off the lights on their vehicles and drive down the runway to access the theatre without paying the customary admission. Fortunately, there were no reported conflicts between the clandestine adolescent activity and landing aircraft. When the main runway was paved, the FAA decided the screen was an "obstruction" that had to be removed.

In the 21st Century, drive-in movies have gone the way of ADF approaches, both as entertainment venues and guidance for night flying. Perham now has all the modern visual aids including Runway End Identifier Lights (REILS) and Precision Approach Path Indicators (PAPI). There's still a traditional rotation beacon. When the weather requires them, GPS approaches are available in both directions including the miraculous LPV which provides a precision approach without any ground equipment. The fully lighted runway is 4100 feet long and can accommodate 100% of the small aircraft fleet. Ground facilities include a very nice arrival/departure building and self-service aviation gasoline. A courtesy car is available for short term use and there are rental vehicles for long stays.

Perham is a progressive city. Economic development and quality of life rank high on their goals. The town offers plenty of jobs, a new regional hospital and a diverse economy. It's no surprise then that a lot of the airport's traffic is related to local commerce. Agriculture and food processing are also prominent, so summer means increased traffic from aerial applicators. A flight school completes the airport business picture. None of that means you can't fly to Perham just for fun, and there's plenty of that around. Eastern Ottertail County is arguably the best lake district in North America, and Perham has a classic downtown featuring the 1906 City Hall. The building was renovated in 1993. It's in the National Register of Historic Buildings and still serves its original purpose as the center of City government.

If you're on a $100 hamburger run, there's a lot of good eating around. For longer stays, there are some great hotels and the area features many excellent resorts. You can rent hangar space for overnight storage insuring your aircraft is as comfortable as you are. If you really like the place, there's also some long-term hangar leases available.

Plenty of streams and lakes provide lots of opportunities for human recreation, and good habitat for turtles. A big event in Perham is "Turtle Days" in June featuring "international turtle races." Use your imagination to figure out how that works, but you can bring your own pet or borrow one for the day. Food, drink, music and a parade are part of the fun. The East Ottertail County Fair is in July and includes a carnival with the usual rides. There's also livestock shows, plus more music, food and drink.

On less auspicious days, you can ruin a good walk on the 27-hole golf course. There are a lot of parks to visit. The local trails accommodate walkers and bikers. For the winter sports crowd there's cross country skiing, snow mobile trails, and a first-class ice-skating rink.

Josiah Perham was the first president of the Northern Pacific Railroad. His name sake city was founded in 1871 when the railroad's westward expansion reached the town site. Near the end of World War II, the village council appointed a committee to study the feasibility of establishing a municipal airport. Sixty-eight acres were purchased in 1946 for $2000 and the site became a flying field. A hangar was constructed in 1948 and by 1949 two turf runways had been established. The drive-in theatre opened in 1953.

Later, paving projects and lighting improvements brought the airport its current configuration. The arrival/departure building was added to welcome visitors about the same time as the first paving project. Successor railroad companies to the Northern Pacific still serve Perham, but the nearest passenger stops are Wadena or Detroit Lakes. The "new" Highway 10 is mostly a modern, four-lane, limited access road.

Driving to Perham could be a pleasant experience but flying there would give you a whole lot more time in what most of the locals consider paradise.