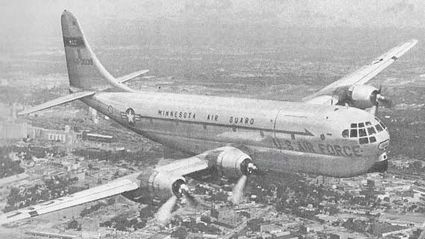 How do you say goodbye to an airplane? Not just any airplane, but a silver winged giant that has been a part of your life for the last 12 years. Not the prettiest flying machine in the world, but her big four bladed props have wormed their way into your heart, as she flew with you and your buddies of the Air National Guard to the four corners of the world, without so much as damaging a little pinky. Fifteen million miles she has traveled, her hold filled with ammunition for the gallant men of Korea and Viet Nam, medical supplies for a nature ravaged South American neighbor, and food and blankets for refugees of a war of long ago.

How do you say goodbye to an airplane? If you are a member of the Minnesota Air National Guard, you say it reluctantly, and unbelieving...not believing that her spacious flight deck and cargo holds will be torn asunder, and her shiny metal turned into pots and pans for tomorrow's bride to be.

In October, the last of the Boeing C-97s, the Strato-Freighters, pride of the Minnesota Air National Guard, made its last flight. Its huge tires squeaked down on the runway at Davis Monthan Field, Tucson, Arizona, and the big 28 cylinder engines were stilled forever. At the controls of that last airplane, on the last flight, was Brigadier General John Dolny. His crew was every last man of the Air Guard. They all loved her, and trusted her, and kept her looking like new for those many years. In her place on the line will be a newer breed of bird, a higher powered, screaming, smoking, homely monster. The men will learn to fly her, and fly her well, but there will never be a love affair between them and the C-130 Hercules. She is a good airplane, and will perform brilliantly, but she will never be mentioned with reverence, like the C-97.

Davis Monthan Field is the bone yard for old airplanes, its sorta like putting them out to pasture, never to leave as an aircraft. Oh, maybe someone will buy her, just maybe, but more likely she will sit there in the blazing sun until she is declared legally dead, and then she will lose her wings, and her identity, and she will be returned from whence she came.

The MINNESOTA AIR NATIONAL GUARD, this year completing 50 years of continued State and Federal service, has established a record with the C-97 that probably will never be equaled. From their base at Twin City International, the big planes, manned by reservists (week-end flyers, if you will) has held a worldwide mission in the Military Air Command. Called to active duty in 1961, the 109th Squadron and supporting units took part in the missions of the worldwide Air Force, and then returned to reserve duty, now lean and tanned and trained to perfection.

Here are a few statistics of interest 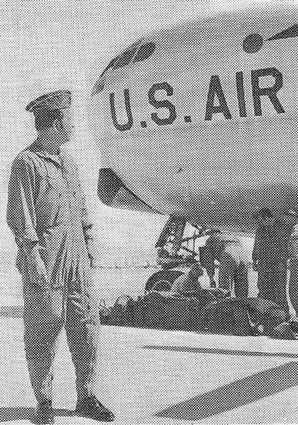 Editor's note: I was privileged to share the joys and pleasures of the C-97 with the officers and men of the Minnesota Air National Guard. I shall always be grateful. Sherm Booen