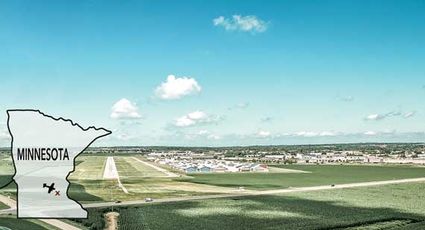 Once upon a time pilots training for their instrument ratings regularly practiced approaches at Minneapolis-St. Paul International Airport. It's true, that really happened. MSP had the only Instrument Landing System (ILS) facilities in the Twin Cities, so that's where instructors took their students. Until the 1970s there was even a flight school at MSP specializing in instrument training. Some of the approaches were the notorious "back course ILS" which use the localizer transmitter for the opposite runway and the pilot turned away from the cockpit course indicator to stay "on the beam."

This system worked OK for many years, but then came airline "deregulation" and large increases in scheduled operations. It soon became obvious that conducting training fights at big airports was not convenient for anyone. In 1979 the FAA recognized the need to increase capacity at "major hub airports" by improving "reliever airports." A program was initiated with priorities going to short term projects that would produce quick increases in the hub airport's capacity. Installation of ILS systems at satellite fields was identified as an effective way to achieve that goal. At the time none of the Metropolitan Airports Commission (MAC) relievers were suitable for siting an ILS. However, a privately-owned airport on the south side of Lakeville was.

Airlake Airport was developed in 1966 to serve tenants in the adjacent industrial park. In 1969 a Fixed Base Operator was established, and the airport became a privately owned/public use facility. The location fit nicely with the existing reliever system and MAC purchased the Airport in 1981.

MAC planners must have been clairvoyant. Lakeville and the adjacent city of Farmington are in the middle of one of the fastest growing parts of the Twin Cities area. Located just 16 miles south of Minneapolis/St. Paul International Airport, Airlake is home to over 130 aircraft. Total annual operations are estimated at more than 35,000 making it a busy place. The Airport is a major contributor to a thriving economy. Besides providing access to the aviation system, the airport has a total economic impact of nearly $13.2 million.

A full service FBO offers all levels of maintenance. There's also flight instruction and aircraft rentals. Jet fuel is full service and Avgas can be purchased 24/7. For ground transportation there's both rental cars and taxis. The ILS with a full lighting system was installed. Not only does the approach provide the intended training facility, but it enhances the utility of the airport for business aviation. GPS/RNAV approaches are also available. There's a particularly interesting VOR approach if you want a challenge (and still know how to use VOR). An AWOS reports the weather conditions.

FAA standards have resulted in the runway being somewhat shortened with displaced thresholds and overruns, but there's at least 3700 feet available for landing. A project is in the works to increase the runway length to 4850 Feet. A full parallel taxiway leads to the FBO and hangar area. The parking apron has plenty of space for transients. If you're looking for a home for your airplane, hangar sites will be available after the next project is completed.

Airlake might be oriented to business aviation and flight training, but there's plenty of good stuff to make it an enjoyable destination. Just south of the Airport is the incredible Wat Lao, often described as a place of serenity and peace. This Temple was founded in 1985 on a beautiful 80-acre parcel next to the Vermillion River. Buddhist philosophy is compatible with many religious beliefs, so flying to Air Lake then visiting Wat Lao might be a unique opportunity for pilots who consider aviation a spiritual experience. For dedicated pilgrims, the temple is within walking distance of the airport.

Farmington and Lakeville offer many opportunities for recreation. There are events for all season, cultural resources and stuff that's just plain fun. If you're on a $100 hamburger run, several good eating places are very close by. For those who like airport gatherings, "Pan-O-Prog" Lion's pancake breakfast and fly-in happens on the last Sunday in July.

Four of MAC's reliever airports now have ILS approaches. Thanks to the wonders of Global Positioning Systems, they all have precision approaches (LPV). The original reason for adding Airlake to the system isn't an issue in the 21st Century, but the newest MAC reliever has more than proven its value in many other ways. Long term planning includes a lot of new stuff, so the best is yet to come.