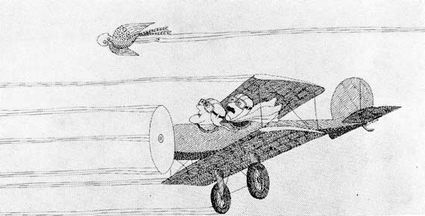 Generally, records are made to be broken or duplicated. Not so with this one. Ralph Johnstone and Archie Hoxsey set a flying record which has never been matched.

It was a windswept day at Belmont Park, New York, Oct. 10, 1910. Their light aeroplane made an arrogant stand against the buffeting. The tie-down ropes, such as they were, strained. Spectators smiled. They had come for thrills – and some to prove that these flying things were just a fad.

Only seven years before, the Wright brothers had recorded the first flight at Killdevil Hill in Kitty Hawk, N.C. Johnstone and Hoxsey were pioneer flyers who had joined the Wright flying team.

To these men, this flight, like any other, was a dare-devil trick. They were accustomed to “tricks” in the air, but not to this much wind.

Johnstone had set the endurance record of three hours, five minutes and 40 seconds just a month before this day. Hoxsey, at about the same time, had flown to an altitude of 11,500 feet, surpassing Johnstone’s previous record of 9,741 feet. And, just a week before, Hoxsey had taken Theodore Roosevelt for a flight at the St. Louis Aero Club show.

They never disappointed a crowd. They climbed in to the kite-like biplane. When the propeller was started merrily spinning, they taxied for takeoff. Then Hoxsey applied full throttle. The struts and panels sang, shuddered and creaked. The nose lifted, and the plane was airborne. Johnstone and Hoxsey knew they had a struggle ahead.

The aeroplane fought into the wind for half a mile. Then, as the crowd watched with alarm, the plane seemed to be hung in suspension. No forward motion. It was just matching the gale. The wind continued to increase and the plane was forced back – completely back out of the park area. Out of sight!

Johnstone and Hoxsey actually were flying in reverse, still holding the nose of the plane into the wind. This went on for 25 miles – carrying the intrepid pilots backwards. Finally they escaped the gale and landed in a pasture. No damage.

They had established a record – a record of backward flight. And, apparently, that record is going to stand – because the pilot hasn’t appeared who wants to either beat it, duplicate it, or dispute it.