Career day offers opportunity to talk about a career in aviation 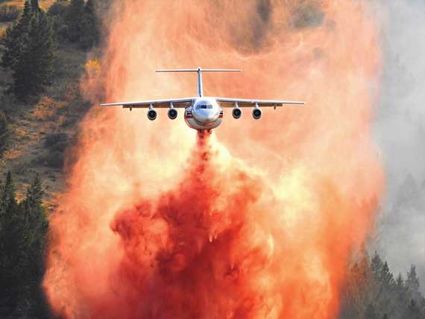 The ARVO RJ85 dumping fire retardant over a forest fire.

An RJ85 air tanker flying over the forest, dumping bright pink clouds of fire retardant, was shown to Moose Lake High School students on a video by Captain Todd Olson during Career Day on Feb. 28.

Olson, who grew up and graduated from Moose Lake High School in 1978, told the students about his experiences and career as a pilot.

"When I was in high school, I liked driving fast cars and operating all sorts of machines," he said. "But I didn't know what career would best suit my interests."

"There was a flying club at the Moose Lake airport at the time so I started taking lessons when I was 14," he said. "While in high school, I talked to an Air Force recruiter but I didn't want to take that path because a flight spot wasn't guaranteed and I wasn't interested in joining the military. Still having the desire to fly, but not knowing my career path, I decided to attend the Dunwoody Institute of Technology in Minneapolis after high school to become an electrician."

He received his Journeyman Electrician's License and used it as a means to earn a living. However, he still thought about flying and went on to get his Private Pilot's License at the age of 23 while married and working in the oil fields of North Dakota.

"When my wife and I moved from Minot to Minneapolis, I saw planes flying overhead all of the time and it fueled my interest," he said. "I wondered often about pursuing a career in aviation. I met an airline pilot named Bruce who became a friend. He offered to take me to lunch and helped me set up a five-year plan to go from being a Private Pilot to a Commercial Airline Pilot and explained the sacrifices involved. Wanting to pursue the life that I had imagined, my wife and I decided and committed to making a career change when I was 29.

"There are basically two routes to get into commercial flying, military or civilian. I inquired about joining the Air Guard but I was too old at 29. There are four-year colleges that offer degree programs in aviation but now having a young family to support, that option didn't seem doable. I decided to pursue a different avenue."

Each day, after working on his full-time electrical job, Olson went to the satellite airport to work on all of the required ratings: Instrument, Commercial, Multi-Engine, CFI, CFII, CFIME.

"It took me one year to accomplish this, often working a 70-hour work week," he told the students. "It was a great sacrifice for both myself and my family. In order to get a job in aviation, I had to accumulate hours. Most people become flight instructors, which is how I did it."

Olson finally achieved his goal of becoming a commercial airline pilot when he was hired by Mesaba Airlines at the age of 32.

"I flew 50-seat planes to begin with," he said. "By the time I left there, I was flying domestically and to places like the Bahamas. I became a Line Check Airman and eventually an APD (Air Crew Program Designee), training new captains and new first officers, as well as issuing FAA-type ratings."

Olson said that in his spare time, he ferried airplanes from Tucson, Arizona (where the air is dry and planes do not rust) to Montreal, Canada. On several occasions, he flew planes from Morlaix, France, to Tucson for storage.

"Eventually, I grew tired of the US airline transport business and my kids were grown," he said. "I was looking for change and some adventure and decided to look for work overseas. I took an early retirement from the airline and applied for work in Japan because it was a safe country and the airline paid well."

After earning a JCAB Airline Transport License, Olson said that he spent two years flying Japanese airliners while living in Toyko. He and his wife loved the experience and enjoyed it thoroughly but found it difficult to be so far from home.

"It was a 12-hour flight to come home and a 15-hour time change," he said. "I decided to come back to the United States to work."

Currently, Olson is an Aerial Firefighting Pilot with Aeroflite, a company based in Spokane, Washington.

"We fight fires nationwide," he told the students. "The U. S. Forest Service determines our location, which can be anywhere in the United States, including Alaska. We can even send a plane or two to Australia in their summer, our winter."

The aircraft that Olson operates holds 3,000 gallons of fire retardant.

"At nine pounds a gallon, that is 27,000 pounds that falls off the plane when the load is dropped," he said. "It requires significant down force on the controls as the load is released."

Olson said that the amount of retardant dropped and the coverage level can be controlled.

"When dropping over big timber, the retardant can be dropped in shorter, heavier coverage, or stretched out when dropping over grass fires," he said. "Retardant doesn't stop the fire but it slows it down so the firefighters on the ground can put it out.

"We can take off heavier than we can land. If the drop gets canceled during our flight, we have to drop some retardant in order to land. It is dropped safely in a designated area called the Jettison Area, which can be found at every air tanker base."

Olson explained that everything on the plane is about weight. The interior on a tanker plane, including all of the insulation, has been stripped to lighten the weight.

Above the fire is the Fire Traffic Area, where different types of aircraft are flying in a circular pattern.

"There is often a stack of aircraft orbiting," Olson explained. "Aerial supervision aircraft, very large tankers, large tankers, helicopters and single-engine planes are below us. It looks like a bee's nest. The helicopters drop water that they have picked up in a bucket from a water source, and the single-engine planes drop water or retardant. The CL415 Super Scoopers that our company operates can carry 1,600 gallons of water scooped from a lake and drop it right on the fire to cool it off.

"One time, while we were waiting at the tanker base, we saw smoke coming up over the treetops," Olson recalled. "We figured that the fire was about four miles away. After receiving a dispatch, we got into the plane and flew over it, spreading the retardant. It took 11 minutes from take-off to landing." 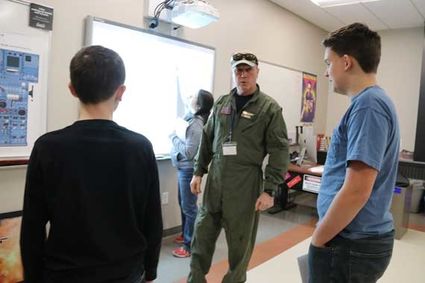 "The winds were 60 miles an hour," he said. "That, unfortunately, made it too dangerous for us to fly."

Olson appreciates his time off at his Moose Lake home, and he is currently building a float plane of his own. It is a Murphy Rebel kit plane on which he plans to add floats and skis. He is looking forward to adventures out west, in Alaska and Canada.

As Olson looked back on his career, he told the students his favorite motto: "Live your life with intention. Live the life that you always dreamed of – the life you always imagined living."

Olson said that he is grateful and feels blessed for the goals that he has been able to achieve, and he hopes to continue living out his dreams.