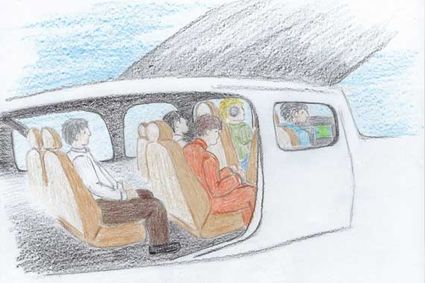 This is #26 in a series of "non-traditional" pilot occupations I've done over the years. All too often, we think of an aviation career as "you could be a Charter pilot, Corporate pilot, Airline pilot, Ag pilot, etc. There is SO MUCH MORE to aviation beyond these traditional pilot positions, and I've tried to highlight the more "unusual" over the years.

Back when light airplane charter was a popular business, we used to get requests to transport prisoners by air, using General Aviation aircraft. Though it was a charter operation, there are some special issues and considerations that need to be addressed.

It makes economic sense to sometimes transport prisoners by air.

• Usually, one Deputy can accompany one or two prisoners-rather than a Deputy plus driver in a police vehicle.

• There are rarely overnights-no security concerns about having to provide sleeping quarters or guards for a prisoner-or to transport and house them in a local jail.

• The transfer can be done in a single day-rather than overnights-saving time for the deputies.

• Meals are not a concern, as they would be for a road trip.

• Each stop for a prisoner is an opportunity to escape-or to injure the deputies or others.

• It's much more secure-less chance of an escape.

Consideration must be given to weather-unless the operator and aircraft are approved for IFR operations (rare in a single-engine aircraft) you had better have good VFR all the way. Fortunately, prisoners aren't usually in a hurry to go anywhere, so you have the luxury of postponement-but you SHOULD have a reasonable assurance that you'll have the weather to complete the flight. Even if you can legally file IFR, consideration has to be given to your listed alternate-will there be Law Enforcement available to take care of the prisoner? Can you shoot an approach to your destination if they don't have approved weather-or can you safely proceed VFR from a place that DOES have an instrument approach and approved weather?

The escorting deputy should have a plan in place in the event that you have to divert, due to weather or mechanical issues. Where will the prisoner be housed? What other agencies are involved?

There is the subject of restraints. One Law Enforcement Agency liked to have the prisoner in handcuffs, and the cuffs around the seat structure. This has the advantage that the prisoner can't use the cuffs as a choke or garrote to strangle the deputy or the pilot-but it means that the prisoner has to be locked in from the front-difficult to do if the deputy is seated behind. It also is an issue in the event that the aircraft has to be evacuated quickly. One Law Enforcement Center used "straight-jackets"-prisoners could get out if they had to, but would have had a difficult time overpowering the deputy or the pilot.

Despite all of the worries and precautions, our "passengers" rarely caused an issue. Most were glad to be out from behind bars and to go for an airplane ride. I had one young Latino sitting beside me one day-I know a smattering of Spanish, and asked if he was OK with the ride. "Me Gusta!" ("I like it!") he replied, with a smile. The accompanying Deputy seated behind us said something in rapid-fire Spanish that I couldn't translate in the noisy cockpit-but that caused to prisoner to show fear. I asked the Deputy what he said. "I told him that if he acted up, we were going to open the door, and nobody would know what happened to him" he replied. He then laughed-and the prisoner also laughed. The Deputy said something else to the prisoner, and they both laughed-"I told him that if he liked this, to tell all of his fellow felons about the nice airplane ride he was getting!"

Prisoner transport by General Aviation is not as common as it used to be. Jails are larger now, with provision for longer "stays." Plea bargains lead to shorter sentences. Some shorter-term prisoners are housed in other County jails nearby under contract. The U.S. Marshal Service transports the more hardened prisoners to Federal penitentiaries via dedicated airliners and professional guards. (You sometimes hear them on ATC-call sign "Justice____")

All in all, it was one of my least favorite things I've done in my aviation career-both from a "hassle" and "danger" standpoint, and the idea that I was part of having to deliver someone to an unhappy destination.

Those of us in aviation love to share it with others-this is one I would have gladly passed on.

Jim Hanson has been flying for 57 years, with over 50 of it in the FBO business. He loves to fly almost anything-airplanes, jets, helicopters, balloons, gliders, seaplanes-and he enjoys being around "aviation people." Jim has flown 331 unique types of airplanes-among perhaps the top dozen pilots in the U.S. to attain that number. He has been writing for Minnesota Flyer for 23 years-sharing his aviation experience. He can be contacted at the Albert Lea Airport (where else?) at 507 373 0608, or jimhanson@deskmedia.com Drop in-he will probably be there-UNLESS HE IS OUT FLYING!