A beautiful February day for a Fly-In

Some of the ski planes, Note the nice groomed runway at the right.

Thanks to Bob Heavirland for the following report and photos from the recent Aitkin Fly-In for Ski planes and Wheel planes.

There were twenty to twenty-five planes flown in and approximately 70 people in attendance. Not bad for a day with a high temp of 18º! 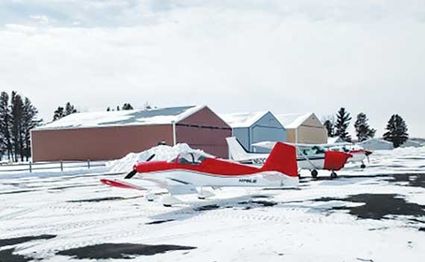 Adam Forsberg and Pete at Adventure North in Aitkin, MN had the grass runway groomed for ski planes and the paved runway plowed.

Adam had posted that he would have FREE Chili and hot dogs for all that attended.

My hangar door is frozen shut and I can't get my plane out so I asked Steve Beyl from just East of Wild Mountain in Wisconsin if he would want to go to a fly in on Saturday, his answer was "WHAT TIME DO YOU WANT ME TO PICK YOU UP?"

Thanks to Adam for hosting and Steve for picking me up.

We had a good time visiting with other pilots and friends from around the state and one from Vermont.