#328 in an ongoing series by feature writer Jim Hanson 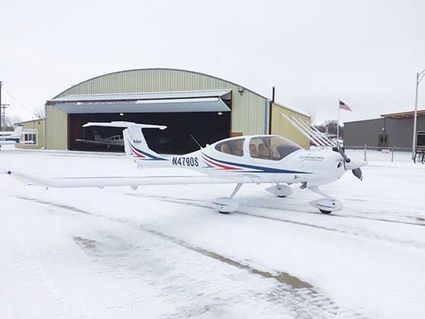 One of the reasons that carbon fibre makes slick airplanes is the slick finish-not a rivet head to catch the wind. Another reason is that the airframe can be made just big enough to protect the occupants-comfortably. The compound curves would be hard to fashion from metal.

I take every opportunity to fly unique aircraft-but in flying for 56 years, and 52 years in the FBO business, new types to fly don't present themselves very often.

Corey De Jac showed up at our affiliated flight school-Accelerated Aviation Instruction-for a Flight Instructor-Initial course, and brought his company Diamond DA-40 Star aircraft along for the ride. Corey is one of the pilots for Huber & Associates, based in York, Pennsylvania. The company has 2 Diamonds, a Piper Mirage, and a Citation Mustang-providing data services for government agencies throughout a 1,000 mile radius of Western Pennsylvania.

It didn't me take long to ask him to let me fly the aircraft-one thing you learn in the FBO business is the aeronautical version of the successful salesman's credo-"Timid salesmen have skinny kids!" He was gracious enough to teach me how to fly it-I told him that "this is an opportunity to use what you've learned in the CFI class to 'practice teach'-show me how to fly this airplane." Though he was only halfway through the course, he did an excellent job of keeping up a "line of patter" in explaining the aircraft systems, procedures, and speeds.

The first thing most people notice when preflighting the aircraft is just how LONG the wings are-almost 40 feet! Diamond started out making gliders and motor gliders in Weiner-Neustadt, Austria (near Vienna). The glider heritage of the aircraft is readily apparent-check your hangar door width if buying one! The Diamond also has glider-like lines-a smooth composite finish, a wasp-like fuselage, and a T-tail.

Boarding the aircraft is not difficult-unless you are older or disabled. There is a handhold on each side of the glare shield inside-open the canopy to access it. Put one foot on the small step and climb up onto the wing. Step over the door edge and put your foot down on the floor-between the control stick and the center console. It takes more time to describe it than it does to board the aircraft. Once in, there is no adjustment to the seat, other than the reclining position. Instead, reach the front of the seat to electrically adjust the rudder pedals to YOU. I'm 6'4", and found them "adequate"-though I would have liked to have had perhaps 2" more travel, I was not uncomfortable. Cockpit width is wider than a comparable Piper or Cessna, and the rear seat had good leg room. The back seats fold down to produce a large combined baggage compartment. The back seat has its own canopy door-a nice feature for loading passengers or cargo. The canopy gives superb visibility almost all the way around the aircraft. The bad news is that like all aircraft equipped with a canopy, the seats can get wet if it is raining outside. You either love canopies, or you don't.

The Diamond is equipped with a Garmin G-1000 system-a great system that provides a digital presentation of flight information and engine management-or if you wish, provides a navigation map display. Traffic is shown both on the navigation display, AND on the primary display relative to the nose of the aircraft-left/right and high/low. It features a Flight Director, and an autopilot with altitude hold and V-nav coupling. Steam gauges at the top of the panel provide backup.

Starting the Lycoming 180 h.p. fuel injected engine is straightforward. We waited a moment after starting to allow the G-1000 to initialize before taxi. Steering the full-castering nose wheel is by differential braking-it takes only a few minutes to get used to it-and you'll never think about it again. Flaps are used for every takeoff. After the run up, we taxied into position and applied power-and almost immediately had positive control using only the rudder in a 10 knot quartering headwind. Like all T-tails, the elevator is not immediately effective, but by positioning the stick just aft of neutral, I felt it become effective at about 40 knots, and we broke ground at 55. Corey told me to hold 75 knots for the initial climb-raise the flaps at 400 feet, and transition to 85 knots. At about 800' AGL, he advised to leave the throttle full forward, but bring the prop back to 2400 rpm for max continuous power. The aircraft climbed at 1000 fpm in cruise-climb, with two aboard plus half fuel-a function of that long, efficient wing-producing good climb and efficiency at high altitudes. Again, the outside visibility was superb!

Departing the pattern, we established cruise power at 3000' due to a low overcast, and I observed 131 knots TAS as computed by the Garmin-while burning less than 9 gph with the mixture full rich. That's Piper Arrow speeds with fixed gear! Throttling back to about 45% power (110 knots TAS) cut the fuel burn to about 6 gph (we didn't go to lean of peak for this short flight). That's better than a Cessna 152! The controls were light but firm-no dead spots. The sporty controls and superb visibility made me want to try steep turns-and the airplane responded well. I was able to do 55 degree banked turns easily, roll out on heading, and right back to a steep turn in the other direction. This is one of those airplanes that doesn't require "pilot compensation" for handling-it makes the pilot look good! Another note-the aircraft is not only quiet, but there is very little vibration-the feel was almost turbine-like. That's unusual for a 4-cylinder engine-perhaps it has something to do with the composite construction.

All too soon, it was time to take it back to the airfield. I had been warned that the aircraft was hard to slow down-and the warning was right. We merged into the traffic pattern, and I was once again glad for the great visibility AND the traffic advisory system. We slowed to 108 knots indicated for approach flaps to fit in with the trainers, and deployed full flaps just below the 91 knot maximum speed to hold 80 knots indicated-slowing to 75 across the fence. I held the slightly high nose attitude as I reduced power, and was rewarded with a smooth landing. As fun as it might be to continue flying-I knew I couldn't beat that landing, so I "quit while I was ahead"!

Researching the service and safety history of the Diamond, I found very few service bulletins or Airworthiness Directives-and also found that it has one of the best safety records of ANY General Aviation aircraft. The aircraft is certified as Normal category, with a Utility category rating at reduced gross weight. If the aircraft has a certification issue, it is because of limited useful load-in this aircraft, slightly over 800 pounds. With the pair of us in the front seats at 400# and half fuel, we were towards the front end of the envelope. With 3 people on board, we could carry half fuel-25 gallons-but at the low fuel burn, we could still range out nearly 250 miles with reserves. HOWEVER-the aircraft (as flown) has a maximum landing weight of 128 pounds less than max gross weight-meaning you would have to burn off that amount of fuel after a max-gross departure. At 9 g.p.h.-you would have to be down to your reserve fuel before you would be legal to land. The good news-there is a kit available to modify the older aircraft to reinforce the landing gear, increasing the maximum landing weight and minimizing the problem.

WHO BUYS THIS AIRCRAFT?

The night after flying the Diamond, I was still thinking of the flight, and wondered "who buys this aircraft?" The next morning, I started research on Diamond sales-they seem to fall into three categories:

PEOPLE THAT WANT A TECHNICALLY ADVANCED AIRCRAFT-with new avionics, new interior, and modern aerodynamics. These buyers want NEW-they may be buyers for a Porsche, BMW, or Mercedes (not coincidentally, these cars also have a Teutonic heritage). A spruced up used car or even a brand-new Ford or Chevy doesn't do it for them, they are looking for quality, safety, and economy.

HIGH-VOLUME FLIGHT SCHOOLS are the other large group of buyers. These buyers want state-of-the-art avionics for their airline or ab-initio training-they want their students to learn state-of-the-art avionics use to facilitate skills transfer to jets. Like all flight schools, they want economy-and the Diamond Star delivers. They are concerned about safety-and the Diamond Star has the best safety record in almost any category of GA aircraft.

Finally, "I WANT THE BEST PERFORMING AIRCRAFT THAT I CAN ACTUALLY AFFORD TO FLY" private owners. These buyers have usually owned other aircraft, and they can afford either a newer used airplane, or a new airplane. Though they can afford the high performance used aircraft, they are often put off by the cost of fuel and maintenance on legacy higher-performance aircraft. This is their compromise aircraft-performance that is good enough to accomplish their mission, with the economy of simplicity of design-fixed gear, modern avionics. 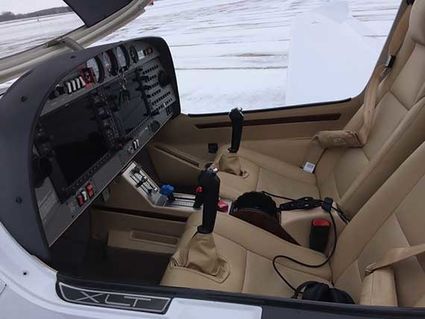 The control sticks unclutter the instrument panel-as does the glass cockpit.

Obviously, Diamond has found their niche-well over 1000 Diamonds are already out there!

AIRCRAFT COMPARISON CHART CAN BE FOUND IN PHOTOS.

Jim Hanson is the long-time FBO and airport manager at Albert Lea, MN. In 56 years and over 30,000 hours of flying, this is his 328th unique aircraft type flown. He has flown airplanes, seaplanes, skiplanes, amphibians, helicopters, gyrocopters, balloons, blimps, gliders, and military aircraft. Though there is no official criteria for logging unique airplane types, Jim only counts them if he gets to make a takeoff or landing. This does put him near the top of this unique category. If you have a unique airplane that he possibly has NOT flown, contact Jim at 507 373 0608, or jimhanson@deskmedia.com