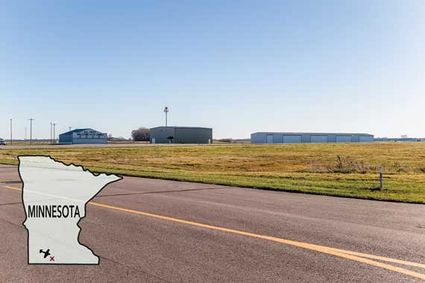 Henry Sibley was having a bad day. He was supposed to recommend a name for the town that was to be the "division point" for the St. Paul and Sioux City Railroad to his fellow directors. General Sibley was going to propose a melodious Dakota name, but he'd forgotten it. E.F. Drake was the railroad's president and proposed a name they could all remember, St. James. In 1870 the railroad was completed, and the Village was chartered in 1871.

St. James is still very much a railroad town, but in the 21st century its transportation options have diversified. There's good road access, but the best way to get there is flying to the St. James Municipal Airport. This is a modern General Aviation facility. The Airport features a 4000-foot-long paved and lighted runway. An automated weather system reports current conditions and RNAV approach procedures are available if it's less than ideal. If you remember how to use such a thing, there's a "non-directional beacon" on the field. Runway End Identifier Lights (REILs) and Precision Approach Path Indicators (PAPIs) offer visual guidance. There's a partial parallel taxiway and a generous apron for ground operations. Fueling is self service and the Arrival/Departure building is open 24/7.

In the late 1950's a group of pilots from the St. James area saw the need for access to the airspace system. They raised some money, bought 20 acres of land, and built a turf runway. Later the City acquired the airport for $1, but eventually realized major improvements were needed. After a four-year process, the new airport opened on November 1, 1994. Increased use by aircraft with turbine engines later required a runway extension to the current configuration. The new airport is a busy place, with 15 based aircraft and over 6000 annual operations.

Even with a great airport, the folks in St. James haven't forgotten their heritage. Railroad Days is the community celebration that happens the last weekend in June. Festivities include athletic events, food, exhibits, music, dancing, and a parade. The fun spills over into a spectacular firework display over St. James Lake on July 4. If you visit on a less auspicious day, you can learn about the local railroad history at the Depot Museum. The Depot is the home of the Round House Inc. That's a non-profit organization staffed by the members of the St. James Model Railroad Club. They have some unique model train layouts and are dedicated to educating visitors on the impact railroads had in the US.

If railroading isn't your thing, places like the Grand Opera House, Princess Theater, and Younger Brothers' Park are well worth a visit. The Younger brothers were cohorts of Jesse and Frank James. Following the attempt to rob the North Field bank in 1876, they were captured by the citizens of Watonwan County at the park site 10 miles north of town. St. James is the county seat, and the Historical Society displays artifacts from the capture. The Opera House features music and stage performances, and the Princess Theater is an active cinema with extraordinarily reasonable prices. There are courses for golf using both balls and discs. St. James and the surrounding area has other great parks including one for "off leash" fun with your canine co-pilot.

For a variant on the $100 hamburger try flying to St. James for Hot Dog Day in May. It's another interesting event that raises funds for the local non-profit organizations. They sell hot dogs around the business district, which is closed to traffic. The hot dogs are tasty by themselves, but the toppings come in a huge variety making each wiener a unique experience.

Norman Petersen sold securities in St. James and later owned a printing and office supply business. He was also a lifelong aviation enthusiast who restored or built over a dozen airplanes. He attended the Experimental Aircraft Association (EAA) convention for 57 consecutive years and was an active member of the St. James Flyers. Petersen left St. James in 1980, but not for a bar stool in Boston. Better known as "Nummy," Mr. Peterson moved to Oshkosh, Wisconsin and edited the EAA magazines for the next 10 years.

Minnesota has several towns with Native American names and a few with the names of Christian saints but there's only one named for two Apostles and the patron saint of Spain. It might have got the name by accident, but St. James is a great place with a first-class airport.