Wiley excels both as pilot and business owner 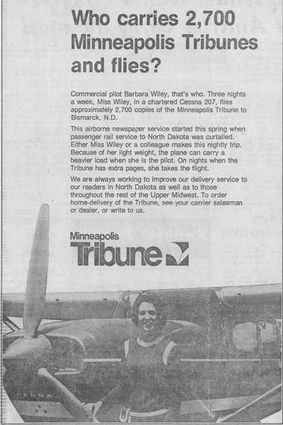 The Star Tribune featured Barb Wiley in their advertisements as the paper was delivered all over the Midwest.

Barb Wiley can be considered a pioneer in aviation in state and nation, but she doesn't want to be considered that. As one of the first commercial women pilots in the nation and the first with North Central Airlines, she just wanted to be viewed for her skill as a pilot, rather than her gender.

When she first applied to North Central in 1973 at age 29, she only used her initials. She got a letter back to a "Mr. B.J. Wiley." She then wrote her full name on the application to fly for them. Now she is retired from Northwest Airlines, but still actively involved in another business, Wiley Properties.

She got both the aviation bug and real estate bug from her late father, Rodney "Hap" Wiley. Her father was in real estate, and since he loved aviation, he decided to build hangars at Crystal Shamrock, He later built 113 of them all over Crystal Airport. "When he did things, he did not do them in a small way," Barb recalled.

Hap built many hangars and if he had chosen to build a few at a time, they would have cash flowed better, Barb explained, but once they were paid off they cash flowed much better.

Barb, who grew up in Osseo, started out her aviation experience by getting rides from her dad. Barb loved high altitude while her dad was a low flyer, looking for antelope and deer.

Her dad first bought a Cessna 150 from Crystal Shamrock for $5,000 and asked Barb if she wanted to learn to fly. Between Barb, her brothers, other friends and relatives, they got 12 ratings off of that first airplane. When the airplane was due for a new engine and everyone had acquired their ratings, the airplane was sold for $3,000. Her dad also acquired a Cessna 206, Cessna 207, and a Cessna 180 on skiis and floats.

"I felt sick on the first lesson, got sick actually, but said, you know, I really like this," Barb said of her first experience in that 150.

By the time she was 20, she had her private pilot's license. At the same time she was at the University of Minnesota pursuing her education degree, she also got her instructor's license, which she said really helped her aviation career.

"I think you can learn more when you teach since you go over and over and over the subject, until you become very familiar with it," said Barb.

This included flying newspapers at night for the Tribune to both North Dakota and South Dakota in a Cessna 207.

Her father instilled in Barb that she could do anything.

"My dad was the type that he would have no fear for you," Barb said.

Over the next seven years at Shamrock, Barb got her ATP and also wrote the operations and training manuals for the DC3 charter operation, since Shamrock had two of them.

Additionally, she flew charters to Canada in a 10-passenger Cessna 402.

"Dad pushed me to think things through and do what you have to do," Barb said. "I always laugh now that if you fly fishermen up there and they know they have to get back home, they will treat you with a lot of respect."

She became the chief pilot of charter operations at Shamrock, and there were about five pilots at this department.

Over those seven years, she had logged 3,800 hours by the time she applied at North Central.

She interviewed with the president of flight operations with North Central.

"The interview was kind of strange because the Vice President of Flight Ops was comfortable interviewing men and he chuckled when I told him I had flown DC3s, cause North Central had D-3s in their fleet." Barb said.

Within a week, she was sitting in class with other pilots at North Central.

The training for the Convair 580 was difficult at first, she recalled, as she had not flown an airplane that powerful, heavy and complicated before.

"It had lots and lots of horsepower on each side and if you lost an engine, it was physically tough to keep it flying straight," Barb said.

Barb said she didn't feel any different being the first woman pilot for North Central.

"The other pilots were just great. I had no problems. I was treated like a sister if they were the same age. If they were older, they would be just like a dad," said Barb.

"If you do the job with the best of your ability, all the male pilots treated me with respect." Barb said.

Her first flight was out of Chicago, and she said the captain thoroughly enjoyed it.

"He had a great time and I am sure he probably went back to tell them how it worked out," Barb said.

Barb said it was not a stressful job, but you had to be prepared. Back in the days before 911 she remembers when you could walk to the back of a 747, and see 400 plus people in the aircraft.

"The instinct is wanting to get everyone from Point A to Point B very safely and smoothly with no embarrassing moments. It did not matter if there were no passengers or 400 passengers. What drove you every day was to provide a safe efficient flight.

"Years ago they taught more nuts and bolts than they do now," Barb said. On one occasion we were inbound to MSP and we did not get the safe gear down lights. Standard procedure in this situation, because of the large propellers contacting the runway if the gear was not down and locked, was to shut down one engine on the downwind and the other engine when on short final. The great hockey coach Herb Brooks was on that flight. We had to tell all passengers what was happening, and emergency vehicles were lined up on each side of the runway. The gear was down, but the indication was not working. At the conclusion of the safe landing, and we had rolled to a stop on the runway, my left leg developed an uncontrollable nervous shake. I guess the adrenalin had quit working. We were all happy to be safely on the ground.

Now, Barb and her husband, Al Lindquist, a retired air traffic controller from the Twin Cities, get around in a 1980 Cessna 172 XP on Wipline amphibious floats. Barb tries to fly once a week in the summer and any time the temperature gets above 20 degrees in the winter. They draw some unusual looks when we show up with a float plane in the dead of winter with snow all around the airports.

Now, Barb works with Wiley Enterprises, the company started by her father 65 years ago, which has properties in the northwest metro including Osseo, Maple Grove, Brooklyn Park, Champlin, Coon Rapids and surrounding areas. This includes retail, office, medical, apartments and aviation hangars.

Barb works in the office. Bruce (Barb's brother) and Mike concentrate their efforts on leasing and development opportunities, while RJ performs all the maintenance and keeps the work crew busy. Mike and RJ are Bruce's sons.

Mike said he really enjoys working with family recalling he got his first paycheck when he was in the second grade. He recalls going to work with his father on Saturdays, and sometimes Sundays.

"We had to earn our money," Mike said he enjoyed learning about work ethics at a young age. "It is nice to have family around all of the time."

"We are very very hands on, where there are some real estate owners who are still investors," Mike said. "We all have a role." 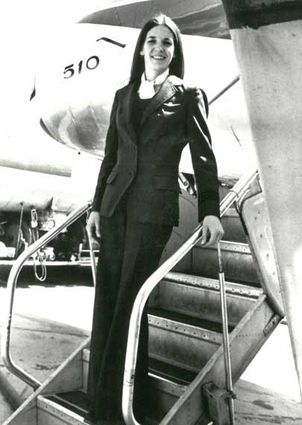 Between all of the properties, they own and manage around 320,000 square feet of property in the real estate business. Around 95 percent of their customers are small business owners, and they have long-term customers, one of almost 40 years.

The Wileys market their business through the Minnesota Flyer, and of course word of mouth.

Barb said renting hangars is a good option for many since if a person is transferred in their line of work, they don't need to have to try to sell a hangar while being out of state. If something breaks down, they don't have to also tackle this part of owning a hangar.

"I love small business and I love to help them," Mike said.

Barb loved flying for the airlines and continues to enjoy flying her private airplane. She continuously bumps into airline personnel all over Minnesota. She would recommend this career to any young man or women interested in taking up the sport.