From the archives Reprinted with permission from the Grygla Eagle Newspaper 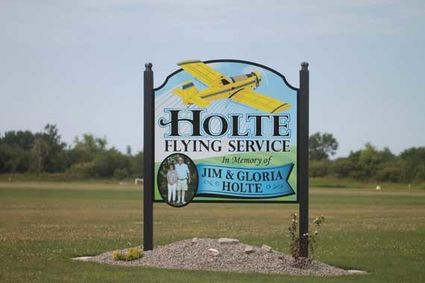 Bound for Alaska, Jim and Gloria Holte left this earth together on Monday, June 1st (2015). The two passed away as a result of an airplane accident near Fort Nelson, British Columbia, Canada.

The Holtes retired from the spraying business in 2014; Holte Flying Service was in business for 32 years. Since retirement, the couple had been planning for their dream destination. Their son, Brian, who is also a pilot, says the pre-planning was plenty. Jim and Gloria had always wanted to go to Alaska, he said, and had everything prepared and in order in regards to their maps, flight & trip plans, customs, etc.

The couple left their farm in Grygla, via their Cessna 182, on Wednesday morning, May 27th. With plans to visit relatives in Grande Prairie, Alberta, the small plane headed for Canada, crossing the border at the International Peace Garden in the state of North Dakota and the province of Manitoba.

In no rush, the Holtes spent the next five days catching up with various family members, departing Alberta the morning of June 1st. In accordance with their flight plans, they made their first fuel stop in Dawson Creek, British Columbia, but the Holtes failed to arrive at their next stop, farther north, in Watson Lake.

"Dad was in no hurry," stated the Holte's eldest son, Brian. "If the weather was bad, he would have never gone up," he concluded. Brian is referring to preliminary reports that state weather is believed to have been a factor, with heavy cloud cover obscuring visibility of the mountains, causing the Holte's plane to crash.

The Joint Rescue Coordination Centre, in Victoria, received its first hits from the plane's emergency locator transmitter around 12pm (Central Standard Time). Not seeing their plane on the radar, Canadian authorities contacted the Marshall County Sheriff's Department, where Chief Deputy Jon Tinnes was able to con firm through family, that Jim & Gloria had departed Alberta the morning of June 1st. After searching throughout the day with two planes and a helicopter, the rescue crew finally spotted the wreckage around 7:30pm (CST) near Fort Nelson, B.C.

"We may never have the full answers," suggested Bruce, who is the Holte's middle son. "I guess at this point, we're just finding comfort in the fact that they were together...they were doing exactly what they love to do and they left together."

Jim and Gloria's three sons, Brian, Bruce and Brad, welcomed the Grygla Eagle to the Holte farm, where time was spent on the front porch of the family's home, remembering the special couple. Jim and Gloria were married on September 4, 1965 in Grygla; they would have celebrated their 50th wedding anniversary this fall. Always putting their family first, the couple took pride in attending as many family functions as they possibly could. Most of the time, their mode of transportation was their airplane! They enjoyed watching their boys grow up and later marry, giving them 6 beautiful granddaughters. Their youngest son, Brad, shared that when it came to retirement, Jim and Gloria had one big priority – to follow their grandkids lives. "Our parents were great at evenly dividing their time. They'd attend as many of the girls' programs and events as they could, never thinking about the things they had to sacrifice or leave behind. They were more than willing and eager to be a part of our lives," he offered.

Reflecting on their parent's lives, the sons shared numerous fond memories of the two. Gloria had a passion for taking pictures; she especially loved taking family generation photos. Being strong in her faith, Gloria tried to live the best life that she could and took away many life lessons from her bible studies. She was active in Women of Today, Ladies Aid, Red Hats, Lull-A-While Homemakers, MN Citizens Concerned for Life and a local Bible study group. She loved to travel, being right next to her husband's side, and was proud to support Jim in any way that she could. She was nurturing and made their house into a home, they added.

Jim's passion, in addition to his family, was flying. In 1964, he enlisted into the United States Air Force, serving 6 years. In 1979, he became a licensed pilot, offering flight instruction and aerial application. Not only did Jim enjoy sharing his love of flying with others by teaching his son, Brian, to y, he also enjoyed giving rides and helping those in need of medical transportation. In all, he had logged over 11,000 hours of total flight time. "Flying was a lifelong dream of mine," Jim had told the Eagle in an interview last July 2014. His sons also made note of what a patient man he was, always being on board with new ideas they had throughout the years

"Our dad also felt so rewarded when he could help others," the three agreed. "He would drop everything to help someone who need- ed it. Not only would he y someone down to Minneapolis or Rochester in need of medical help, but he'd also y their family members down if needed. He never thought twice about helping someone in that way," they added proudly.