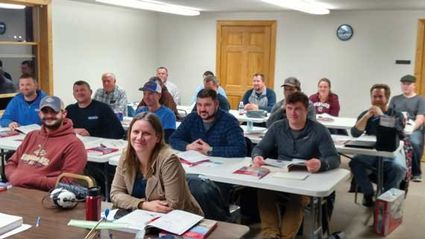 A classroom full of ground school students at Hawk Aviation.

Everyone knows where they were on Sept. 11, 2001, Mark Nelson, the owner of Hawk Aviation in Rush City included.

Just the day before, he broke ground on a new hangar for his business. This did not

From this start, Nelson was able to continue to grow his business, facing challenges along the way when the aviation recession hit, and is now even an airline pilot.

Nelson said he never was interested in aviation when he was younger. He went for one ride when he was 5 years old with his cousin. When he was 30, his brother and law and another friend were both taking flight lessons and encouraged Nelson to join them.

After his first lesson in the fall of 1993, Nelson said he was "very nervous." Then he decided to try a second lesson because he had already purchased ground school books. The second lesson went much better and he continued to earn one rating at a time. From the start of having little aviation experience the first 30 years of his life, he is now a pilot for SkyWest Airlines, a Delta Airlines regional carrier which has a base in Minneapolis, and continues to operate Hawk Aviation in Rush City.

A few years ago, he discontinued his dairy operation and decided he would fly commercially. He joined SkyWest about two and a half years ago.

"Pilot careers now are in high demand," Nelson said. "We are training more students now than ever that would like to have a career in aviation."

After getting his license and learning he enjoyed the training aspect of aviation, he bought a Cessna 172 Skyhawk. Then he got his instrument rating and commercial license. Nelson said he thought it would be kind of neat to be an instructor to help pay for his hobby.

In 1999, he taught ground school through community ed at Rush City and he had 10 students. Three months later he conducted another ground school and another 10 students went through training. There was a pool of 20 people who wanted to get flight instruction. Jack Jasperson, another local instructor was brought on board to provide instruction during those first years.

"It just started to grow after that," Nelson said.

He grew this business while being a dairy farmer, and with his wife Carrie, had triplets along the way.

Kayla is attending the University of Minnesota, and is majoring in earth science. She has spent the last four plus years on the U of M Women's Track team. Mark said she has taken a few flight lessons, and her goal is to fly more this summer.

Kyle, a private pilot, graduated from UMD with a degree in civil engineering, is working for SEH as an airport engineer, along with his wife Bailey, who works at the same firm.

Kevin, who also learned to fly from Mark at Hawk, is teaching at Lake Superior College in Duluth and Hawk Aviation, and is doing class room and flight instruction. He graduated with a degree in geography and business at UMD. He is building his hours with hopes of also reaching the airlines.

Currently, Hawk Aviation does three ground schools a year for the Private Pilot

license and one for the Instrument rating. Most students come from within 50 miles of Rush City. They can also do specialized training. One of his students was in the National Guard. This person became a pilot within two weeks after having no logged time. Nelson said this can be done, but suggests a longer time frame, so pilots can experience all kinds of flying.

He appreciates working with the City of Rush City on improving the airport. Mark also sits on the advisory airport board for the Rush City Regional Airport.

"The city has always been very favorable to the airport. All the years I have been here they have bent over backwards," Mark said, who said the city is always interested in improving services and expanding the airport.

"The key is to have pilots on these boards," Mark said, noting some cities have no pilots on their airport commissions.

The airport also has partnerships with other communities. Pine City closed their airport in 2000, and the thought was to make Rush City a regional Airport. When the runways were extended, Chisago County was also involved so the three entities pooled their resources to get this done.

Over the last 20 years, Nelson has seen the ups and downs of the business, especially after 9/11 and the recession that started in 2004. Their market was for people who wanted to fly recreationally or wanted to use it in conjunction with their businesses.

Nelson noted his business was started as a hobby, and even continues that today, noting all of his flight instructors now have other jobs.

"We hang out here because it's fun," Mark said.

His current instructors include his son Kevin; Jay Valez, who flies for Endeavor Airlines; Anthony Golon, who works at Century Link; Gene Sherrod, a pastor from Grasston; and Steve Boo, a former air traffic controller who is from Lindstrom; along with Mark also doing instruction. All of his staff have gone through training at Hawk.

Mark said he has certain standards in training so having all who have gone through flight instruction there is a big plus. Flight instructors are matched up to students based on their schedules.

"Coming from a dairy farm background, any job in the aviation is like a vacation," Mark said.

Mark said Hawk does try to keep costs reasonable for those who are learning to fly. When he started his business, aviation gas was around $1.50 a gallon and as of last month, was at $4.39 Obviously fuel and insurance drive most of these costs.

While the national average time to get a private pilot license is 65 hours, Mark said he tries to get his student their license after 40-45 hours of flight training. Mark said they follow a syllabus, and when they can, they try to economize as much as possible.

From start to finish, a student could expect to spend between $7,000 - $8,000 to become a Private Pilot. He encourages students to fly once a week. If they do it once a month, they will get rusty between lessons. They offer different financing options if the student desires.

Along with new students, he also has a few that have not flown through 10 years. Hawk has done a "rusty pilot" seminar in the past. 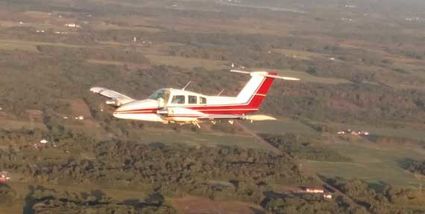 For those rusty pilots, if they have gone through ground school at Hawk, they can go back to ground school and take a few classes at no additional cost unless they want new textbooks.

Some of Hawk's students just want to solo. Others have goals in flying commercially. Some just want to rent an airplane, while others buy their own.

The youngest student they have had in ground school is 11, while their oldest, was 75 years of age, who started and completed his training.

He even helped teach the publisher of the Minnesota Flyer to get his private license, so Mark can really teach anyone to realize their dreams.