Points to Ponder- a guest editorial 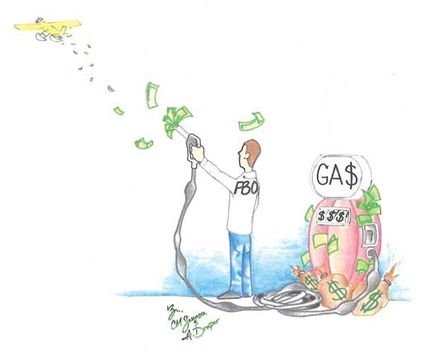 Before engine shutdown, pilots should be able to know how much money they will have to shell out when making a pit stop at one of our nation's thousands of fixed based operators (FBOs). But the reality is that too many pilots are flying blind.

Many FBOs don't clearly disclose the costs pilots will incur when making a fuel stop, parking on the ramp, or dropping off a passenger. It's time we end that practice before our pricey $100 hamburger turns into a $1,000 hamburger.

Egregious pricing and lack of transparency at publicly funded airports has been a hot button issue that AOPA has focused on for more than two years now. Keeping flying safe, fun, and affordable has been etched in our association's mission statement since 1939 and we can't let that fall by the wayside. We've made advocating for transparency and access a top issue for us in 2018 and plan to carry it out through 2019 as well.

As pilots, we can all appreciate the services offered by FBOs and consider them important components of our complex aviation infrastructure. And while most FBOs do an excellent job providing aviation-related services, there are a number of FBOs that still keep pilots in the dark.

In this modern age of technology and apps we can access the costs of goods and services for almost anything with just a few keystrokes on our phones, but for some reason, transparency is lacking in the GA world. It's puzzling and frustrating that we are on the cusps of autonomous flying vehicles, yet we can't see online fees.

While it's far from over, our grassroots campaign against egregious pricing has significantly improved the situation at a number of airports across the country. And now, with the support of five other major aviation organizations, more comprehensive change may be on the horizon.

The release, titled "Know Before You Go," highlights a set of communications practices to enhance FBO transparency including publishing an online list of prices, fees, and charges pilots may face when landing at an airport. The "Know Before You Go" business practices will strengthen the flight experience, communication between FBOs and their customers, and transparency for general aviation overall.

It's clear that certain FBOs are trying to push out small piston traffic and owner flown aircraft in favor of more profitable visitors to their ramps. But denying pilots reasonable access to the airport, especially airports that receive millions in federal funding, is not going to happen under our watch.

To get further insight on our initiative, we have also enlisted the help of others in the industry including our Airport Access Advisory Panel, which is made up of pilots, FBO owners, and airport managers. The panel was designed to offer advice on how we as an industry can work together to empower airport boards, pilots, and elected officials to balance reasonable access to airports and profitability for FBOs.

So far, we have seen significant progress being made at a number of airports. Orange County's John Wayne Airport paved the way with the County Board of Supervisors voting to replace an FBO following numerous pricing complaints. In Utah, Heber City revised its airports minimum standards to promote competition. Waukegan National Airport in Illinois opened its south ramp for free overnight transient tiedowns and Casper/Natrona County International Airport in Wyoming gave clearance for pilots to access a walk-through gate to avoid unwanted services. We commend the moves these airports have made to improve the situation and call them "self-help" airports. And we hope other airports take proactive measures to encourage competition and set a precedent.

But as someone who logs a decent amount of flight hours each year, I feel very passionately about this issue and believe we can do better.

If you want to learn more about AOPA's initiative or if you've encountered egregious FBO pricing, please report it at http://www.aopa.org/fbofees

Let's shine a light on this issue and make sure we aren't flying in the dark.

Expenditures to look for beyond fuel costs at some community airports.

Not all airports charge for services, nor are fees, when they are charged, uniform. Some fees are made available in advance through research (calling ahead, searching websites) though others may become only at the point of sale.

Here is a partial list of expenditures to look for beyond fuel costs. 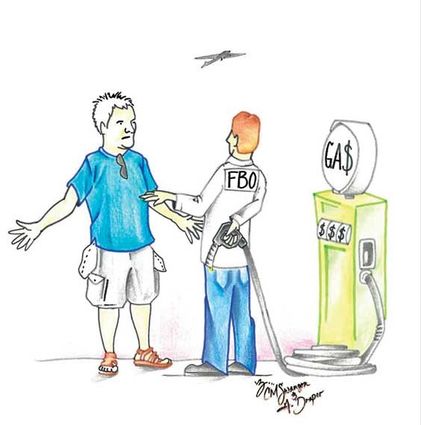 • Dropping off a passenger