Nine aircraft showed up at the Milaca airport December 14 in response to in Facebook post by a group called the Minnesota Airshow Fly-In and Flight Club.

This is just a sample of the power of social media and a nice day to go flying after weeks of low visibility keeping many of us grounded.

On Thursday December 13 at 6:23 p.m. Ryan Nelson posted on Facebook in a group called "MN Airshow, Fly-in and Flight Club" that he was having an "Impromptu rendezvous" at Milaca the next day, Friday December 14 at 1:00 p.m. That is short notice on a weekday and I wondered if anyone would make it.

I need not have worried. It was about 12:45 when I arrived on a flight from North Branch to Isle for cookies, then to Milaca. Two of the Milaca pilots came in ahead of me and taxied to their hangar. 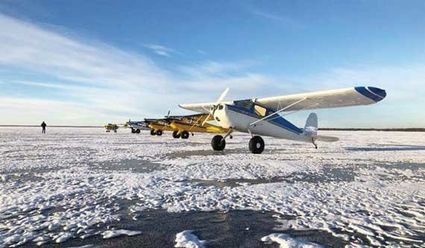 Micah Lindstrom, his Cessna 140 in the foreground, flew in from Mora.

I was the first one there from the Facebook group. Before I finished with installing my engine cover, more planes started arriving and parking in the tie down area.

In total, there were 12 planes that showed up from Montevideo, Hibbing, Mora, Crystal, North Branch and others. We were invited to tour the hangars of the Milaca Pilots and see some of their aircraft restorations. Of course, the group had to do some flying together and visit the area lakes.

Thanks to Ryan and all who flew in for this flash mob of pilots.

Thanks for this report to aviation enthusiast Bob Heavirland, long-time member of EAA Chapter 237, who takes to the skies in all seasons in his 1948 Aeronca Super Chief, which he keeps tucked away in a private hangar on his rural North Branch property.