Celebrating the photography of Brad Thornberg 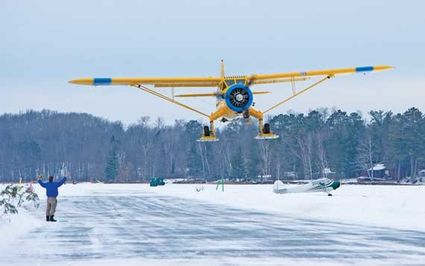 Brad Thornberg takes pictures for the same reason he flies a Super Cub...for the joy of it. His interest in photography began as a child, largely due to his father's influence.

"Ever since I was little, my dad had a camera in his hand," said Thornberg"

Thornberg and his siblings took up the hobby as well.

"A lot of it is just amateur stuff where we're out there shooting more for the fun of it than anything else," Said Thornberg.

Born in Cambridge, Minnesota, raised in Bloomington, and always feeling a draw towards aviation, it was while attending Bethany College of Missions that he earned his pilot license in the summer of 1987 at Flying Cloud, in Eden Prairie.

"That summer was pretty interesting," said Thornberg. "I was supposed to be out doing personal evangelism with other students from the Bible School, but somehow, I ended up at the airport taking flying lessons for some reason. They were quite understanding."

Thornberg also earned a business degree at Bethel College and bought a 1963 PA-18-150 Super Cub, which he based at Flying Cloud Airport. Though he hasn't pursued a career in either flying or photography, both have been an ever-present part of his life.

Having a cabin in the Brainerd Lakes Area, Thornberg often flew in that region as well. He ended up moving to Brainerd Lakes permanently in 2000 and began work at Harvest Fuel, Inc. He became part of the flying community based there. The '63 Cub went to a new owner in Detroit Lakes. He later acquired a 1965 PA-18 150.

"I rented a hangar and just got to know everybody around the airport like typical airport bums do," said Thornberg. "There's enough tail dragger flying up there with Champs, Citabrias, Scouts, Huskys, Cubs, Super Cubs and Super Cruisers that it was just a natural. There are so many places to go and things to do with ski flying and float flying."

The transition from city to country was fairly easy to make.

"Our business is such that we have to be all over the country anyway," said Thornberg, "My reasoning is, since you have to live somewhere, you may as well live at the lake."

"We go on all sorts of different adventures and you may as well take pictures of it because it's kind of fun," said Thornberg.

Though he lays no claims to have special skills as a photographer, images he captures often end up in a variety of flying magazines and local newspapers. In 2018 the Minnesota Pilots Association presented Thornberg with an appreciation plaque in honor of his willingness to share his images with the flying community.

"The thing is," said Thornberg, "when you do it so much, you kind of develop an idea for what is interesting to the eye, the specific angle of an airplane, or good backdrop. You're trying, if possible, to see the faces of the pilot or passenger and you're looking for action.

"Part of it is just getting yourself into position to take a shot. Then, you have to take ten million shots to get a couple of good ones. Fortunately, in the digital world, we can do that."

He points out the type of aircraft you're shooting also makes a difference. Super Cubs make interesting shots because of the terrain around which they fly, often off road rather than airport. Exotic type airplanes also hold people's attention because of their rarity. 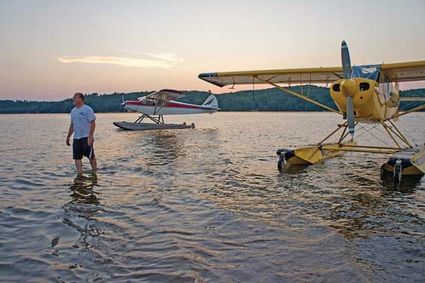 Planes on floats, a testimony to one of the joys of living on a lake.

Thornberg got married four years ago. Sharing his love for aviation and photography made a huge impact on Debbie, his wife, who went from zero experience with general aviation to earning her pilot's license. At times, she now flies while he takes pictures.

Super Cubs are his aircraft of choice for flying and to photograph.

"It's been fun flying," said Thornberg, "Just, VFR, seaplane, land plane, tailwheel, that kind of thing. I think at some point I'll probably go the IFR route and get some faster equipment but, for most of my flying, it's just been low and slow."

All the more opportunity to capture images of clouds and sunsets, lakes and water, and the beautiful surroundings in which Brad Thornberg flies.

Thanks to Brainerd Lakes resident Brad Thornberg for his willingness to share images he captures of his beloved northwoods, fellow aviators, and their aircraft.