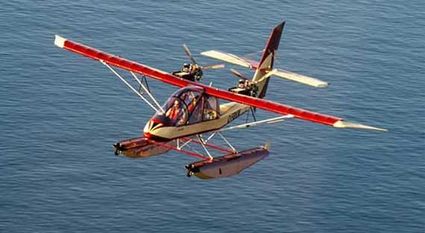 I asked Jim if he would mind putting the aircraft on one of the local lakes-there were a few whitecaps on the lake, but he agreed. Again-Jim performed the entire litany of the checklist- aided and abetted with the gear warning voice system, and as we approached the water, the airspeed was read out aurally about once a second by the flight management system. The touchdown was nose-high and short-the rough water was not a problem. Jim taxied in full- displacement mode, and didn't even have to resort to the use of the water rudders to make the turn-the differential power was enough to turn us downwind, and the aircraft weathervaned into the wind when we pulled power off. We did the checklist, and Jim again briefed the takeoff procedure-"stick all the way back-get the power in smartly, don't let the pusher thrust line drive the nose down-the aircraft will come off the water at about 45-hold that attitude, and I'll get the flaps for you at 65." The airplane performed just as he said it would do-that's one of the best compliments you can say about an airplane-it's "honest." We returned to the airport, where we verified "gear down for a land landing"-Jim made the approach at about 65 in deference to the gusting crosswind ("this airplane comes down right now when you pull the power!" he said). Just prior to touchdown, the flight system voice counted down the airspeed- "39, 38, 37...." and we touched down. He need not have worried. We could again have easily made the 440' turnoff, but we allowed the aircraft to run out to the 1100' cross taxiway turnoff.

Having now had a taste of flying the airplane, questions came to mind.

• I wondered about water spray in the pusher props-note the photos-the props are far above the water spray-no problem.

• I asked about useful load-on this amphibious version, with the higher gross weight, (and the canopy option weighs 70 pounds), useful load is about 500 pounds. Jim said that with the economical Rotax engines, you don't need to carry a lot of fuel-28 U.S. gallons is full capacity-enough for a 3 hour flight with an hour's reserve. He mentioned that he would like the option to carry a couple of Jerry cans in the floats to extend his out-and-back range to/from bush camps.

• The land version has a useful load of about 600 pounds. Jim originally built the aircraft in the original open-cockpit style-but opted for the canopy-both for heat and to eliminate windburn on longer flights. The factory says that the canopy can be removed in about 30 minutes.

• Jim says that "it took about 1000 hours to complete the aircraft." The ultralight-style sailcloth wing covering saves time.

• The Montana 2200 float gear is operated electro-hydraulically, with a manual pump as backup.

• I asked about multi-engine manners-Jim said that "loaded up to gross and on floats, it will maintain about 8000' on one engine". At lighter weights or on wheels, it will climb about 3- 400 feet per minute, unless it is really hot out or at high altitude.

• Jim carries bottles of oil with him-the Rotax engines will run 100 hours on an oil change if using unleaded auto fuel, but only 25 hours if using Avgas-so he looks for places he can obtain auto fuel.

• Heater-though the canopy option makes the aircraft useable for more months of the year in the northern U.S. and Canada, it would be nice to have heat. Some owners have simply used electrically heated motorcycle or snowmobile suits. Lockwood-the inventor and producer of the aircraft, is working on several options.

• Any problems? "Finding a hangar while traveling that can accommodate the 14' high tail can be a problem when traveling away from home." You CAN get the aircraft in a typical T hangar by simply pulling the tail down, and allowing it to come back up when inside- reducing the height requirement to 11 feet.

Thanks, Jim-for another memorable trip "Around the Patch". For more AirCam excitement, visit their website at http://www.aircam.com

The AirCam can be said to have its origins in the single-engine Maxair Drifter ultralight/LSA. Phil Lockwood was producing the Drifter, and in the early 90s, he received a call from a team working on a story for National Geographic. They asked him to come to Africa to fly and to teach them to fly the Drifter-doing aerial photography. In Africa, they had to build their own airstrips-sometimes operating out of 600' strips or less. The rainforest terrain was unlandable and likely not survivable, causing Lockwood to think about a second engine. For the next story, National Geographic agreed to let him design and build an aircraft suited for aerial photography filmed at inhospitable locations.

The AirCam was flown from the rear seat, with the photographer having an almost unlimited view out the front of the open cockpit. The two Rotax 582 2-stroke engines provided safety over the jungle, and amazing short-field performance. That original AirCam now hangs in the rear foyer of the EAA Museum at Oshkosh. Pilots who saw the article and film contacted Lockwood about purchasing a kit. He made changes to the original aircraft-notably, the change to Rotax 912 4-stroke engines. 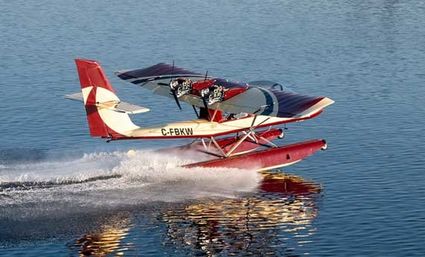 Lockwood had uncovered a market that most manufacturers had abandoned-an airplane that was SAFE-FUN-and VERSATILE. The aircraft continues to develop-it's been popular in the aviation press for the past few years to call an aircraft "reimagined"-but the addition of amphibious floats opened up yet another market, and the new enclosed canopy opened up yet another by providing a way for those of us in the north country to enjoy it.

Jim Hanson is the long-time FBO at Albert Lea, MN. With over 30,000 hours over 56 years of flying and 326 unique types of airplanes, Jim still gets a thrill in flying a unique type. If you have an aircraft that Jim hasn't flown before, contact him at 507 373 0608, or jimhanson@deskmedia.com