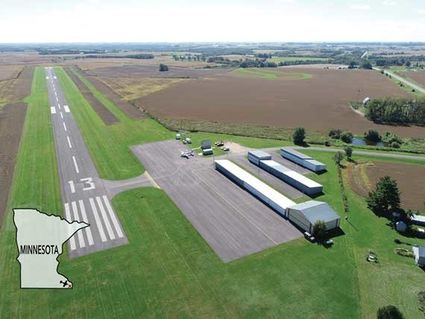 When Hadrian was Emperor of Rome, a rather rowdy group lived north of the province of Britannia. Called the Caledonii, they were such a pain that Hadrian had a wall built across the island to keep them out. Naturally he named the wall after himself. Other groups lived in the area, but these people were so notorious that Caledonia was the Roman name for what is now Scotland.

About 1,700 years later, Sam Houston, president of the Republic of Texas before the annexation, was running for president of the United States. For some reason the hero of the Texas revolution was rather popular in the Minnesota Territory, so the county in the southeast corner of the state was named after him. A town called Caledonia became the County seat. Incidentally, Houston had Scottish ancestors and is often posed for pictures wearing a plaid bow tie.

So that's the etymology of an Airport's name. The Houston County Airport is about two miles from the County Seat, and the FAA designator is Caledonia or KCHU. This is a first-class general aviation facility with a 3500-foot paved and lighted runway. There is a full-length turf taxiway parallel to the runway, with a generous aircraft parking area at the north end. VOR and GPS instrument procedures are available if the weather's not too good. The Nodine VOR supplies radio communication with Flight Services. Aviation gas can be purchased at the self-service station, and an Arrival/Departure building has flight planning and meeting spaces. Under-wing camping is allowed on the airport. If you'd prefer, more civilized sleeping accommodations are available less than a mile away. A fly-in is hosted by the Houston County Flyers on the last Sunday in June, and the Caledonia Hot Air Balloon Rally is a big event.

Houston County opened the airport in 1968. Most of the current paved surfaces were included in the original construction, but various improvements have been added over the years. However, local aviation activity goes back to the post World War II boom. By 1947 a flying club was established at an informal airport near Spring Grove. The club owned a Piper J-3 which was soon traded for a PA-11. One of the club members who learned to fly there was Glenn Kinneberg. He eventually became sole owner of the PA-11 which he's still flying 70 years later. If you want to learn about aviation in Houston County, Mr. Kinneberg's wrote a memoir. Titled "Flaps Up" the book is now in its fourth printing. Glenn Kinneberg is a Master Pilot and will be a 2019 inductee of the Minnesota Aviation Hall of Fame.

Houston County's topography is not typical of Minnesota. It even looks a little like Scotland. This is what's known as the "Driftless Region,"so named because the local geology was not affected by the glaciers that shaped the terrain in other parts of the state. The Mississippi River forms the county's eastern boundary. There are some spectacular bluffs along the river. Hills and valleys are also featured, and the swift flowing streams offer some of the best trout fishing in North America. The terrain favors other wild life, including eagles and osprey. The County claims it's the "Wild Turkey Capital of Minnesota". Trails for hiking, biking and horses wind through the area. Beaver Creek Valley State Park is one of the most interesting in the state system.

Caledonia is charming city. There's no wall here. About the only reason to confine the Minnesota "Caledonii" is the High School Football Team. Appropriately called the "Warriors," they've dominated the State's other Class AA teams for the last decade. Caledonia advertises itself as the "Heart of Quilt Country" and local barns feature 8-foot squares painted in a variety of quilt patterns. Downtown Caledonia has some unique architecture including the County Court House, the former jail and the Historical Society Museum. Golf was invented in Scotland (or so the Scots claim) and a great course is only a mile from the Airport.

It's a long flight to Scotland, even on an airliner. Anyway, Europe isn't very friendly to General Aviation. The Minnesota version of Caledonia is an easy trip to a great airport. There's just as much fun to be had, and no customs or TSA. You'll find the fuel prices at the Houston County Airport a lot more reasonable, too.