Eating with history in mind

Restaurateur Troy Reding offers business-casual dining with the option to fly or drive right to the door. Either way, parking is free. 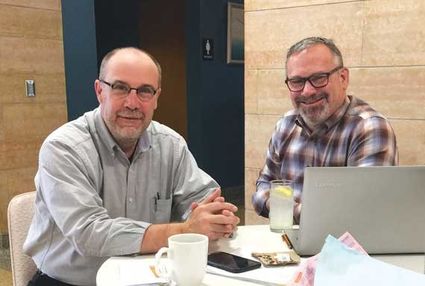 Restaurateur and Holman's Table owner Troy Reding and General Manager Chas Enselein engage in a meeting in the grand entrance hall of the Holman Field Administration Building, near the entrance of Holman's Table. Both have extensive hands on experience in the restaurant business.

It takes a man of vision to see potential for a thriving restaurant in a space located away from foot traffic, devoid of retail business, housed in the last building on a dead-end road. However, restaurateur, Troy Reding is a man of vision.

The last restaurant in the Holman Field Administration Building at the St. Paul Downtown Airport closed in 1999. Flooding in the early 2000s kept the space deserted until an offer was presented to Reding late last year by the Metropolitan Airport Commission (MAC) to remodel that portion of the building for a new restaurant.

"I got a phone call from a friend of mine who heard about this opportunity and thought I might be interested," said Reding. "So, my business partner and I came out and toured the building, which was cool, but the space for the restaurant was just blank walls, bad plaster, and falling down ceilings with nothing in there but space."

Reding already had one Rock Elm Restaurant in Plymouth, and was in the process of opening another in Maple Grove. Still, the possibilities at the Holman Field property intrigued him.

"We have a lot of opportunity here," said Reding. "We can cater out of here. We can put food on planes. We have room for banquet facilities. The deal presented plenty of upside."

After many meetings and negotiations with MAC, he made the decision to move ahead. Ten months after opening Holman's Table, the success of the business is exceeding his expectations.

"From a traffic standpoint, the destination restaurant has worked," said Reding. "People come out here. It's cool, right? The view is cool. The restaurant is beautiful. The food is good. The service is great. People just love it."

"People are excited when they walk in the door because they already have such fond memories of the place," said Enselein. "So many people come here with a story. They tell me, 'I used to work here; my dad used to fly out of here; I remember my parents taking me to the little diner that used to be here when I was a kid.'

"I tell my crew we are so fortunate that people walk in here already ready to have a great time, just because of the venue itself."

The Holman Field Administration Building was designed by Clarence Wesley Wigington (1883-1967), and built in 1939 by the Works Project Administration (WPA). The structure originally housed the Northwest Airways terminal. A small café was located just off the grand entrance hall where people gathered before or after flights, or perhaps to grab a bite to eat during a work shift somewhere on the airport grounds.

In the 1940s, B24 Bombers landed on airfield just outside the building. In the 1950s, the airport became a civilian aviation facility once again, managed by the

Metropolitan Airport Commission (MAC). In the 1970s, a commuter airline, Lake State Airways offered a one-way airline ticket to the Minneapolis-St. Paul Airport for $5. For a year in the 1990s, Capitol Air offered flights to Chicago from the St Paul Airport in a 19-seat, twin Turbo prop Swearington Metroliner aircraft. Today, the building serves as MAC's control building for the St. Paul Downtown Airport that sees over 40,000 takeoffs and landings annually.

Reding and Enselein have extensive experience in the restaurant business. They met in 1986 while working at TGI Fridays. They share the same philosophy when it comes to service, not only from staff to customers, but from management to staff.

"We have people from 19-years-old up to 50 years old working here," said Enselein. "We try to be as helpful and open minded as we can. We just want to be able to put the best team possible in front of our guests. If you can do the job and do it well, we want you as part of our team."

"I think when everybody looks uniform, they feel part of a team, versus coming in in their blue jeans and tee-shirts," said Enselein. "Being in a crisp, sharp appropriate uniform makes people feel more professional. That translates into the quality of work."

In addition to the restaurant, a newly opened banquet room/event space with seating up to 125 people is available across the entrance hall, and currently being booked for special events. 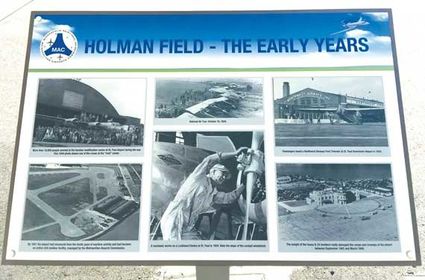 MAC placed a display at the outdoor eating area with historic photos showing some of the activities at Holman Field. During World War II, Northwest Airlines employed up to 5,000 people at the St. Paul Downtown Airport at Holman field. Employees modified new B-24 Liberator bombers, some of which received the highly classified H2X radar, which proved to be an invaluable tool in the European theater.

Aside from attentive service from staff, another benefit for customers is apparent even before they enter the building. Whether flying in or driving in, parking for your mode of transportation is convenient and free. Aircraft park within a few paces of the entrance of the restaurant on the airfield side of the runway. Autos and other motorized modes of transportation park in a lot on the street side of the building for which there is no parking fee.

The restaurant is just a three minute drive from downtown St. Paul, six minutes from Capitol Hill, and reachable from any place by air.

"I think the thing that has been so enjoyable for me is the clientele who frequent this business," said Chas Enselein. "They are nice, appreciative people. To be in my role, I walk around and shake hands and kiss babies. That's what I do for a living now. I get to stand at the front door and dozens of times a day let people tell me how great their experience was."

"It is truly a one of a kind location," said Troy Reding. "You can't replicate this. This kind of traffic, this close to downtown St. Paul, a historic venue that sits right on tarmac. It's one of a kind experience."

For over 79 years, people from around the world have been creating ambiance within the walls of building designed as a portal to aviation from Holman Field.

Today, Holman's Table is offering people in the twenty-first century an opportunity to become part of its history, adding stories of their own to tell.