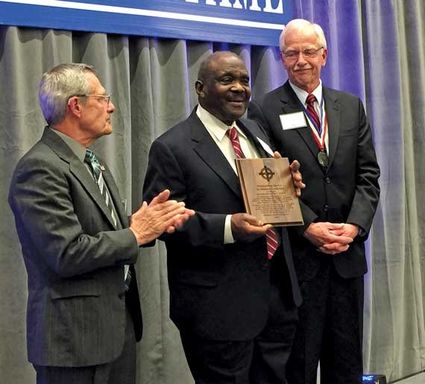 Flight Unlimited President, Reverend Linton Scott introduces inner-city kids to general aviation for much more than the thrill of riding in an airplane. Based at Crystal Airport, Flight Unlimited's office is housed in the administration building next to the control tower. Its 1973 Piper Cherokee sits in a hangar nearby.

"Once they learn how to clean the airplane and the hangar, then we talk about their dress code, about how to dress for success. They wear neck ties and white shirts. They dress up very nice."

For students who may not possess dress clothes, Flight Unlimited has an appropriate wardrobe at their disposal.

"If you come to the office, you will see all kinds of suits there," said Scott. "We have about 20 pairs of shoes, belts, socks, pants, and everything else."

"Polish your shoes," said Scott. "Pull your pants up, not down. Brush your teeth. Comb your hair. Give a firm handshake. Say good morning, how are you, excuse me, I'm sorry, my name is... If you are not well mannered, you are not going to make it anywhere."

Continuing in the realm of character guidance, behavior patterns are also addressed.

"Here's the point," said Scott. "We use aviation as a tool to make people better. If you come to the airport only go get your license, then you're playing yourself short because there are other things you can learn. Go to the library. Stay off Welfare. Be a good citizen, a good person."

"Parents bring their sons or daughters to Flight Unlimited wanting kids to join the program for the behavior and discipline aspect," said Scott. "The purpose of Flight Unlimited is not to become a professional pilot, though you can do that if you want. In fact, I think if you get your license and never fly again, that's fine with me, but go out and be a good person, whatever your profession. So, if you get your license, then decide to be a carpenter, just be a good one."

Born in Jamaica, Scott came to the United States to study Theology at Northcentral University in Minneapolis with the goal of becoming a pastor. His roommate at college, who had plans to become a missionary, was also studying to become a pilot. Scott helped him study by quizzing him from his ground school instruction material. As he quizzed his roommate, Scott also began to learn.

When his roommate got his pilot's license, he took Scott for a ride in a fabric covered Champion 7FC with a tricycle landing gear. Scott was hooked. He decided he wanted to get his license as well. Even though he was a college student with a part time job, he worked out a way to take lessons.

"Sometimes I thought about backing off for a little bit but then, I said no," said Scott. "I took a deep breath and said, let's go for it."

Scott got his pilot's license, graduated college, and became an itinerant pastor until settling in at Mount Olivet Church in Minneapolis as an inner-city pastor, where he has been for over 40 years. His experience in the Community Outreach Program for the church brings him to the inner city where his mission is to develop relationships with people, to assess their needs, and do what can be done to meet those needs. He delivers food, furniture, and clothing donated to the church to support the outreach program.

Back in the late 1960s, he blended his ministry with his pilot skills by offering airplane rides as a way to connect with some of the troubled youth. He started to get a "regular little crowd" every Monday. WCCO television did a feature story on his aviation approach to outreach ministries. Scott met and became friends with Sherm Booen, the founder of the Minnesota Flyer magazine. Booen encouraged Scott's aviation approach to outreach.

Interest and participation in Scott's program grew. By 1970, Flight Unlimited was established as a formal public non-profit outreach. Hundreds of kids have been through the hangar since that time, picking up life skills as influenced by the discipline of aviation. Some have gone on to get their pilots license. Of those, some have become professional pilots.

Though Reverend Scott is pleased for those who have chosen aviation as a career, his focus remains on reaching out to those who want to improve their lives, as well as spend time aloft. 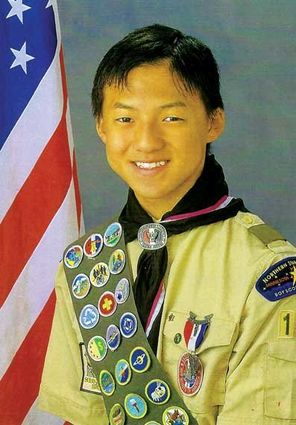 Jeffery Vang, participant of the Flight Unlimited program also excelled in the Scouting program, achieving a multitude of badges, awards, and honors.

"We just tell young people to go ahead and get your pilots license, discipline yourself, and then, let the rest of it take shape," said Scott. "We are not here because there is a shortage of pilots, though we hear that all the time. We're here for people who just plain want to learn to fly, to just go around the patch so they can have their neighbors come on a Sunday afternoon, stand at the fence and watch them do touch and goes."

In 2017, Scott, now in his mid-80s, was honored at a Minnesota Aviation Hall of Fame Banquet, where he accepted an Outstanding Service to Minnesota Aviation award. As he continues to reach out to inner-city kids who may not even be aware they have a dream, Reverend Linton Scott offers an opportunity to step outside the parameters of a life seemingly boxed in, to enter the world of general aviation. His aircraft is a well maintained, ADS-B equipped, 1973 Piper Cherokee, sheltered in an immaculate hanger on pristine grounds. Participation requires the willingness to learn, work hard, clean, mow, care, dress the part, and be guided into your future.

"If you just come to learn to fly, then you're missing out," said Scott. "There's a whole lot of other things you can learn along the way."