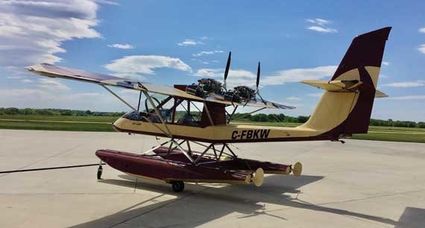 Two seats, two engines, helicopter-like visibility, lots of baggage room, and the ability to operate on land, sea, and air over unlandable areas-the AirCam is an adventurer's dream!

Even after 56 years of flying and thousands of hours, I still love to fly new types of airplanes, but it's getting more and more difficult to find an airplane type that I haven't flown before. I only count it as a new model if there is a substantial change from its predecessors-not like changing model years in new cars. With the low production rates of aircraft today, more often than not, I have had to go to the Experimental aircraft to find a completely new type.

Thus, I was really excited when I received a call from Jim Moshonsky of Thunder Bay, Canada-asking if we had a hangar that could accommodate his amphibious aircraft overnight. I LIKE floatplanes-and especially amphibians-so when he said "It's an AirCam......" I stopped him in mid-sentence and said YES! I've looked longingly at AirCams over the years, but was put off by the very feature that made the aircraft the hit that it is-the superb visibility afforded by the pilot and co-pilot cantilevered far forward of the wing, with structure only up to the waist- Breezy style. At Oshkosh a couple of years ago, I saw the canopy option-required in our part of North America, and even more so in Thunder Bay. The cost of the canopy is high, but it makes the aircraft usable in cold temperatures. I suggested to Jim that I would provide free hangar rent in exchange for letting me fly it-and a deal was struck.

I didn't hear from Jim for several days as they were hung up in getting to the U.S.-but I finally heard "Aircam" on the Unicom. It turned out that they had been socked in by weather, and they HAD to make Grand Marais to clear Customs. While clearing Customs going either way isn't usually a problem, it does mean that you have to give notice, and don't have the option of landing just any place-it's just one more flight item to consider. Watching the AirCam landing at Albert Lea, it looked (and performed) for all of the world like a mini Twin Otter on amphibious floats-he touched down and easily made the 440' turnoff. This was going to be FUN!

I knew he would be requiring MOGAS for the Rotax 912 series engines, so I parked him at the pump. The AirCam is one of those unique aircraft that immediately draws a crowd-pilots- aircraft owners-my mechanics-and even the tradesmen constructing our new arrival/departure building turned out to look at it. After a short introduction and a quick stretch, he asked me "shall we go fly?" The words were still hanging in the air like a Coyote/Roadrunner cartoon as I scrambled up on the float! Jim asked my seat preference-I told him I was comfortable in either seat. While the front seat is adjustable, there was more than enough room in the rear as it is the place where the pilot would sit with a photographer on board-the aircraft's original mission, and only the front seat on this aircraft has some of the amphibian controls.

Rather than reconfigure the cockpit, I elected to simply take the rear seat. I was thankful for the ground ventilation while we briefed the operation and the mission: There were Plexiglas entry doors on either side, the Plexiglass doors to the cargo area, and the huge vertical-opening canopy-great visibility all around, and great ground ventilation. Jim would get us fired up-I would do the taxi and takeoff, as well as the radio calls. We would stay in the local area, where I would hand back the controls while I "worked" ("work" is not the right word when enjoying the AirCam!) at doing the photography. The airplane is amazingly quiet, both on the ground and in the air. The Rotax engines spun up with the starter-and simply started running faster-all very smooth and quiet. The aircraft was easy to taxi using differential braking and differential power-I've always liked the ground handling on almost any float- equipped amphibian-especially one with low stall speeds like the AirCam-rather than taxiing in the takeoff attitude of the land-only version, the aircraft is at near zero Angle of Attack on floats. 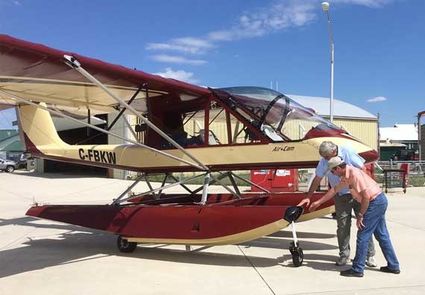 The owner and the author preflight the AirCam. The AirCam is BIG by experimental standards, and even BIGGER on amphibious floats!

Jim ran through the rather short (but IMPORTANT!) takeoff checklist-a run-up and ignition check at 4000 rpm using the split throttles-a double check of the gear and water rudder (My old Lake Amphibian instructor once told me "From the time you first fly a retractable-gear airplane, you will be forever cursed to check your gear-and from the first time you fly an Amphibian, you will be DOUBLE-CURSED, as you sometimes WANT the gear up for landing!" Jim did a very professional job of running the litany of the checklist (I didn't find out until later that he is an Engineer-used to mechanical devices and procedures). He extended flaps for takeoff, and we briefed the procedure-"The aircraft accelerates fast, so get the power in-start rotation at 45, and it takes a fair amount of back pressure with our loading-let the aircraft accelerate to 65 for the climb, and I'll milk the flaps up. You'll feel some sink-counter it with back pressure, and you'll need lots of trim using the "coolie hat" on the stick." I did as requested, and the aircraft indicated 45 in short order with a 18 knot quartering headwind- things happen FAST! We broke ground in 450 feet without even trying-at gross weight, and on floats. Jim mentioned "there is a fair amount of mechanical turbulence out here today due to the light wing loading"-but I've had the same side-to-side slight "rocking" in Cessna 206s and the Caravan on floats. Most float aircraft usually have additional ventral fins on the fuselage- sometimes an extended-chord rudder, sometimes "tailettes" on the horizontal stabilizer-the AirCam has none of these. It's not objectionable-just different, if you are not used to the pendulum effect of floats. After a short period of maneuvering, I turned the aircraft back to Jim while I went to work doing the photography-the very thing the AirCam was built for. It is a photographer's dream-even the rear cockpit is located far out in front of the rest of the aircraft structure. We set up cruise flight-on the float version and down low, 4 U.S. gallons per hour per side (8 gallons total) produced about 85 statute mph. Jim says the airplane will hit the 110 mph limitation, but at a big cost in fuel burn.

The second installment of Jim Hanson's article on the AirCam will appear in the January 2019 issue of the Minnesota Flyer.