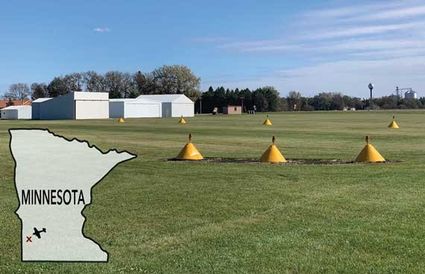 Photo courtesy of the City of Tyler

Golf and airplanes go together very nicely. Aviation makes many more golf courses available and in a much greater variety. In most cases, ground transportation is needed from the airport to the club house. Occasionally, you find a course that has a runway for the 19th fairway, but these are usually private and can be expensive.

If your idea of a good time is putting the clubs the Bonanza and flying off for a day on the links, Tyler is the place to go. The Municipal Airport and Community Golf Course are right next to each other. It's such a great symbiotic relationship that the club house also houses the Arrival/Departure facilities, all adjacent to the aircraft parking area on the southeast corner of the airport.

Tyler Municipal Airport itself is rather unique. It has a 2,600-foot-long turf runway that's lighted and open all year. It's also 160 feet wide, with what might be the best grass surface in Minnesota. That makes the airport ideal for student training. The taxiways are also lighted.

A rotating beacon will help you find the place at night. Tie-downs are available for transient aircraft at no charge. Ground transportation is available from Lincoln County, but it's walking distance to most of the city's commercial area, and several good eating places. Food and refreshments are also available in the A/D Building (also club house) during the warmer months. Feel free to imbibe after golf.

Underwing Camping is permitted if you notify the City in advance. More civilized sleeping accommodations can be found within a mile of the airport. Fuel is still in the planning stages, so make sure you have enough in the tanks for your next leg.

Platted in 1879, and named for a newspaper editor, Tyler was the originally the home of many Danish immigrants. A district on the south end of town is called Danebod, which features a folk school. The school building and adjacent area are on the National Register of Historic Places.

Thyra was queen of Denmark in the 10th century. She directed the building of a stone wall across the Jutland Peninsula to protect her subjects from invaders. She was given the title, Danebod. That approximately translates to "one who saves the Danes."

The neighborhood in Tyler is named for the Queen. The City's annual festival is Aebleskiver Days, held on the forth weekend in July. An Aebleskiver is a spherical and very tasty pancake, also known as a Danish Puff. The name literally mean, apple slices, which were once a key ingredient. Besides eating pancakes, the weekend includes craft sales, sporting events, music, dancing and a parade.

Established before World War II, the Tyler Airport originally had three runways in the classic triangle design of that era. With no crosswind issues, it was used in the early 1940s by the Civilian Pilot Training (CPT) program.

Another prominent facility in Tyler is the Lincoln County Fairgrounds. Early in the airport's history, a barnstormer came to the fair and ignited a passion for aviation in a local boy, Norman Petersen. Not to be confused with the barfly from the television show, Cheers, Petersen was a leader of the Experimental Aircraft Association (EAA). He attended the EAA convention in Oshkosh 57 consecutive times. For many years, he was the editor of Sport Aviation magazine.

Often called Nummy, Petersen built or restored dozens of airplanes. Even though he moved to St. James, and later to Oshkosh, he frequently returned to Tyler, flying the latest of his home-built or restored aircraft. Of course, Petersen had Danish ancestors and took great pride in his heritage. He played the accordion with a group called the Polka Pilots. He made numerous trips to the KZ Rally for vintage aircraft at Stauning, Denmark Airport.

The three runways were all too short for modern aircraft, they weren't lighted, and the airport had drainage issues. In 1999 a major improvement program was undertaken that brought Tyler Airport to its current configuration. The golf course was expanded to 18 holes at the same time. The result was the great facility for golf and aviation you can enjoy today.