The L.A. side of Backus 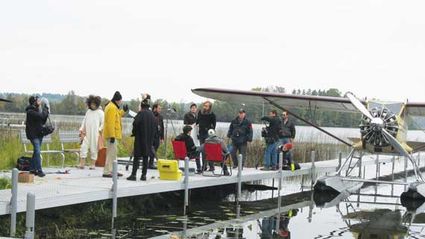 Backus resident, Doug Taylor (wearing aviator glasses) stands under the wing of his 1933 Stinson Reliant at the Bayside Resort dock at Pine Mountain Lake as the California film crew he invited to Minnesota shoots a scene for an upcoming, independently produced television series.

It's all very hush-hush until timing is right for the official announcement. However, Backus residents couldn't help but notice the professional film crew at the Bayside Resort dock on Pine Mountain Lake in Backus, Minnesota in September, shooting a scene for an upcoming, independently produced television series.

Despite a chill breeze, mist hanging in the air, and temperatures struggling to reach 50 degrees, the 21-person crew from California (and other warm climate areas) stayed on task without so much as a complaint among them. Impressive.

What drew the professional entourage to the wilds of Minnesota? A vintage 1933 Stinson Reliant, an enchanting six-bedroom, 1902 home called The Bailey House, and the passionate enticement of local resident Doug Taylor, owner of the aircraft, house, and a number of other rare items including a perfectly replicated Concord Heavy Mail Stagecoach, circa 1868, cutter sleigh, and a French carriage.

Filling in a bit of Taylor's background will help provide a better understanding of how Hollywood came to this particular part of Minnesota. Taylor was born and raised in Pine River, a stone's throw from Backus. As a child, he spent a good deal of time with elders, from whom he developed some valuable, timeless, life skills. Grandpa Kenny taught him the art of listening, how to visit neighbors, and how to drive a team of horses pulling logs.

While spending time at Uncle Cliff's Canadian Wilderness fly-in resort, young Taylor became aware of the business of tourism, and the practicality of owning an aircraft. Grandpa Dean, a mortician, impressed upon Taylor the value of respect for people living through grief, as well as bravely facing the reality of death.

Taylor admits he wasn't a traditional type kid. He never aspired to be a niche group member.

So, after high school, he hopped in his car and took off west to see what was in store for him on life's path.

As fate would have it, he ended up at the American Academy of Dramatic Arts in Los Angeles on a scholarship. There, Taylor made a connection to the film industry.

While in Hollywood, the northern Minnesota cowboy performed as a stunt man in several films, acted in live shows, in television commercials, and on stage, trained horses, and even trained a dog for the movies. When he wasn't on a movie set, or working with other forms of media, he worked a construction company which he created and named Hollywood Handyman which allowed him to continue networking with writers, producers, directors, actors, and others involved in film production.

After several years of experience and building relationships out west, Taylor returned to Minnesota. He formed Action Entertainment, a production company of his own making.

"I write, direct and produce plays," said Taylor. "It's mostly comedies, but some productions are simple, stagecoach re-enactments with staged dialogue."

Action Entertainment has put together Wild West shows, stunt shows, murder mysteries, and special Halloween productions in the Backus/Pine River area. Taylor's entrepreneurial skills have broadened to the publishing field with creation of Great Northern News, an arts and entertainment newspaper, now in its eighth year of publication. He also makes use of his stage coach and team of six draft horses, contracting with local hotels for special rides for their guests, taking part in city celebrations, and putting on summer productions.

From his home base at The Bailey House, Taylor maintains solid relationships with people he met in Hollywood. On a recent visit to California, he was cast as a character in an upcoming television series. As he read through the scripts, he came across a trip episode which gave him an epiphany. 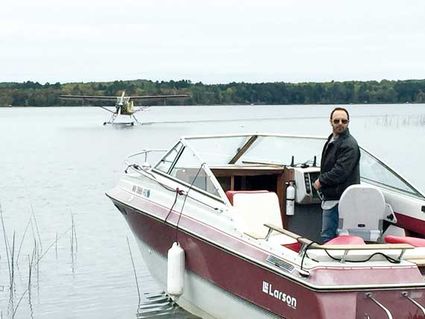 Taylor, awaiting word from the director to head out into the lake, provided the boat for water-to-shore shots. The day's weather served up a high of 50 degrees with a mix of mist, biting wind and clouds.

"I knew it was the episode where I could leverage Minnesota's production value and get Hollywood in my hometown," said Taylor.

After a scouting trip, the producer realized all Minnesota, and Taylor's various "toys" had to offer. Several weeks later, Hollywood arrived in Backus.

"One of the most important benefits to our location is having a place to relax after a long, stressful day of shooting," said Taylor. "I've been to Hollywood. There's just not a lot of rest and relaxation going on there. People who work in the movies are just that, people. They need time to refresh, especially if they're working the kind of schedules making movies or television shows demand."

Having lived in both worlds, not willing to trade one for the other, Doug Taylor is creating an interesting blend of L.A. and Backus. Stay tuned for updates on when and where his 1933 Stinson Reliant and the legendary Bailey House will be appearing on the screen when the television series is released.