Living where you fly 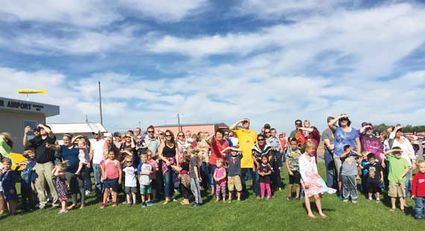 Hector Airport served 1,650 meals at their 76th Annual Flight Breakfast this past summer. The event also promotes general aviation. A favorite community participation activity at the event is a Ping Pong Ball Drop in which kids retrieve Ping Pong balls dropped from an aircraft, which they then trade for aviation related prizes.

When it comes to advocating for a permanent resident living at a community airport, Ed and Connie Newberg, have, quite literally, lived their convictions for 38 years. When they got married in 1977, they moved to the Hector Municipal Airport.

"Then resident, Gary (Bipes) had it for sale, and I was already hanging around at the airport quite a bit," said Ed Newberg, "so it just seemed a natural thing to do, live at the airport. We are just a mile from town. It's been wonderful."

Hector Airport was established in 1925. Except for one brief time in the 1960s, someone has lived at the airport since the 1940s. Most airports were closed in 1942 because of World War II but Hector was opened again when it promised a civilian guard would provide a 24/7 presence.

When the Newbergs moved in, they purchased the 14 by 70-foot mobile home that had been established on the property. In 1987, they replaced the mobile home with a double wide manufactured home. In 1997, they put a basement under the house. Though the city owns the airport, as home owners, Newbergs were responsible for utilities, taxes, upkeep, and improvements to the house.

"In 1981, we started a spray business," said Newberg. "It was really nice to be right there, walk across the ramp, and go to work. You can't beat that."

Newberg noted having someone live on the property also has benefits for the airport. For example, airports with a 24/7 presence may qualify for insurance discounts. Also, when mishaps occur, help is available immediately, like the times an aircraft blocked a runway and he and his tractor were readily available to assist in moving the plane. There have also been two accidents at Hector Airport over the years, in which injuries were mitigated by the fact that someone was right there to assist and call 911.

However, Newberg said, accidents aside, the most important reason for someone to live at the airport is the practical matter of the safety and well-being of the airport itself, and for advocating for general aviation.

"When you have kids riding up on their bicycles, or anyone driving up to the airport, there are going to be a few different possibilities for the way it could go," said Newberg. "One would be, if there is nobody there, someone is maybe going to get into mischief, maybe innocently, maybe not so innocently."

Newberg said airport grounds being unkempt and uncared for invites mischief, including vandalism or theft. He recalled several instances of assets at community airports being spray painted or destroyed. In other cases, aircraft in the tie-down area of a community airport have been tampered with, even to the point of having their engines started, resulting in the airplane ending up damaged when run off the runway.

"Nobody was living there, so that's what happens," said Newberg.

By far, the biggest benefit of a manned airport is being put in the position of an ambassador when company arrives, curious about how an airport works. When Newbergs lived on the airport grounds, they warmly welcomed expected and unexpected visitors alike.

"It makes a huge difference when somebody living at an airport is there to be an ambassador," said Newberg. "You think about a kid riding out to an airport and the place looks like a maximum-security prison, all fenced in, gates locked. What kind of experience do they have compared to an open airport where someone comes out, greets them and says, hey kids, do you want to see some of the airplanes we have in these hangars?"

In 2016, Ed and Connie continued their advocacy by handing over the keys to the double wide to Nic and Sam Heiderscheidt, cousins who are enthusiastically carrying on the tradition of pride in airport maintenance and accessibility.

Sam has been flying for Newberg for several years. Nic is a commercial pilot who also has experience flying for Newberg and, more importantly, has lived at the airport over the past several winters when Newbergs were out of state.

Newberg always arranged for a featured aircraft. In this case he showcased a 1962 UH1 "Huey" helicopter.

"Heiderscheidts are doing a great job," said Newberg. "They keep the airport looking like a golf course, just like we've always done. They are meticulous. It looks like somebody cares. I think that's a big factor for the attractiveness of an airport."

Though Newbergs have moved to a farm just outside of Hector, they are still active visitors to and advocates of the airport.

"I would like to see more of this," said Newberg. "It's going to be one of my passions, promoting people living at more community airports. If you want general aviation to survive, have someone at the airport to fill visitors in on how to get into aviation, how much an airplane costs, how can you find one, what's the best kind of airplane for what a person wants to do in aviation. Those are the kind of answers guys who lived at airports used to provide.

"I see the future and well-being of small, rural airports being threatened by removing rather than promoting a 24/7 presence."